Two months away from home without a food adventure left me in a crazed state.

The other weekend, I wanted to eat a torta, a food that isn’t exactly commonplace around here.

The Fargo torta buck stopped at my Internet search.  I was only willing to go as far as Googling the sh#$ out of Fargo + Moorhead + torta.  I’d love for you to prove me wrong.

My torta craving grew to the point where I considered driving to Minneapolis for a sandwich.  Nothing more.  Just a sandwich.

Last weekend, we returned to the Twin Cities for a quick visit to surprise Jake’s mom for her birthday.  We left for the cities earlier than normal and greeted her when she returned home from work.  Both surprisers and surprisee seemed equally happy about the reunion.

We also visited the family for which I babysat and apprenticed last year.  I know it’s a tale as old as time, but the experience of watching a baby transform into a child that talks in complete sentences and zips around the sidewalks of Minneapolis on a Strider is fantastic and humbling.  We barely have the skeleton of a wedding in place, but we now have a ring bearer.

Speaking of wedding plans, we’re finally getting started.  Or at least, we’re thinking about it.  I’m more concerned about the food.  Can you recommend a vendor who could make a non-traditional wedding dessert?  Neither one of us is a big fan of cake, but we’re very fond of pie.

On Saturday morning, I woke up early to go to the St. Paul Farmers Market.  I managed to get funneled into the world’s most treacherous detour, finally landing in a back parking lot, unscathed.  This summer, our CSA has supplied us with all of our vegetables.  The quality has been high, but the selection mundane.  Walking through the farmers market nearly brought tears to my eyes as I admired stands of melons, okra, eggplants, habanero peppers, and foraged mushrooms (I just learned about Probstfield Farm’s Old Trail Market in Moorhead, MN and plan to stop by this weekend).

I bought some treats to supplement our weekly CSA box and stopped at A Toast To Bread for the empanadas I used to enjoy each weekend. 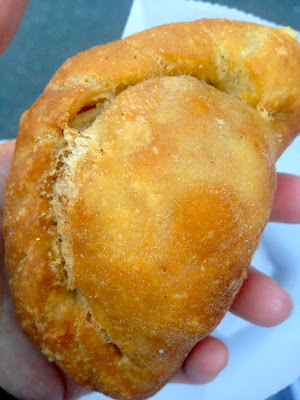 Fortunately, I got there early enough to purchase one of each variety to share with the boys. 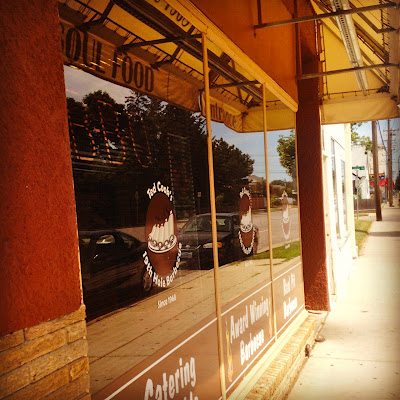 My rib tips were more dried out than normal and I had to toss about half.  Otherwise, everything else tasted the same.

Dinner was cloudy with a chance of these. . . 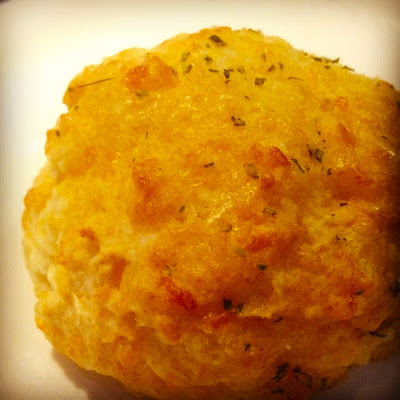 I like to occasionally indulge with meals accompanied by these.  For those who may take issue, my reply is the same as the one I gave to the man in the elevator this afternoon.  He sternly informed me that the cream cheese on my bagel was unhealthy, to which I replied, “I don’t care.”

He may have been a client.  Oops.

On our final morning, I snuck out for a morning torta.  I knew that stacking a torta onto the weekend’s meals could result in trouble, but pressed on towards my goal.  After all, my life has led me down a path of uncertainly regarding when I will run into my next torta.  If I see a torta, I will indulge.  Plus, one can always transport food on ice.  We took home quite the haul.

Jake’s an East Saint Paul boy, through and through.  His parents live in the Payne-Phalen area and it took me until now to discover the restaurants that line Payne Ave. and Arcade St.  On Sunday, I stopped at By More Taqueria, located near the intersection of Payne Ave. and Phalen Blvd.  Someone on Chowhound had mentioned torta.

My one track mind zeroed in to the torta options that could be filled with one’s choice of meat.  I did not notice breaded beef milanesa, my usual favorite, but had plenty of other options to pick from.  Some, I could not translate, though I remember seeing fish, lengua, and possibly cabeza.  I don’t remember much of the illustrated menu posted by the counter, but recall seeing seafood soup and a daily meal special that included nopal (cactus), which I adore.

I asked the man at the register for suggestions, and he earnestly steered me towards chorizo.   So, chorizo it was.

As I waited for torta, I sipped a glass of horchata.  Both cost about $9.  The two employees were very friendly and made everything fresh as families trickled in for their Sunday lunches. 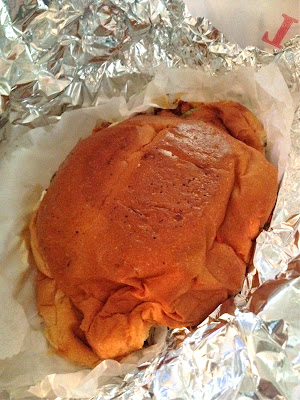 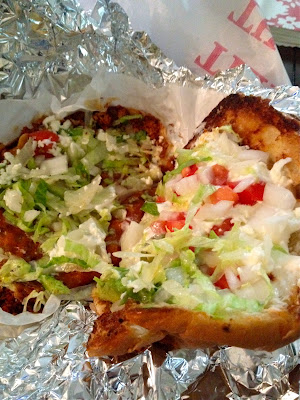 My torta tasted exactly how I had hoped and I dug into my sloppy sandwich.  I paused to share half with Jake. 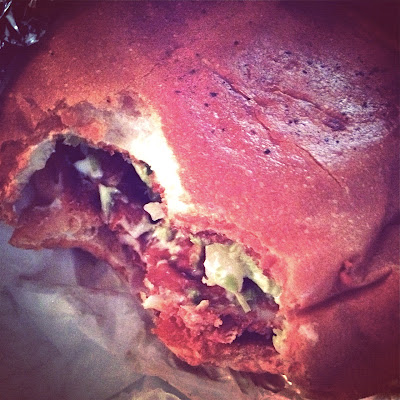 He agreed that it was delicious, though we both bit into small bits of something hard.  My experience wasn’t unpleasant enough to ruin the sandwich, though Jake’s bite left him a little jolted.  I wonder if it came from the chorizo.

In summary, I felt the flavors were really beautiful.
As I drove along Payne Ave, I made mental notes of places I’d like to try during future visits home.  The area’s restaurants rarely seem to be mentioned and I look forward to exploring its food possibilities.