This past week, we found a sizable bunch of radishes in our first Bluebird Gardens CSA box. I curiously nibbled a raw radish and wrinkled my nose when its sharp, spicy flavor hit my sinuses. After several attempts, I found that I enjoyed the radishes sliced into translucent half moons and tossed into salad. Then, I began to wonder what they would taste like on pizza.

On Sunday evenings, I’ve been baking flatbread pizzas in our oven. This week, we experimented with our CSA radishes; a vegetable neither of us had ever seen cooked, let alone added to pizza.

I shaved the radishes and placed them on top of flatbread layered with garlic and olive oil, fresh mozzarella, green onions, and thinly sliced pea pods. Then, I spread citrusy pea green salad on top of the radish pizza. The baking process rendered the shaved radish tender and much sweeter than its raw counterpart.

So far, my favorite flatbread recipe can be found as part of Saveur’s recipe for Lahmacun.  I’ve made the dough at least ten times and substitute honey for sugar and add extra water. The dough has to rise once, but is fairly simple to prepare, even on a weeknight. The texture and flavor remind me of Broders’ Cucina Italiana’s Fulton Flatbread. 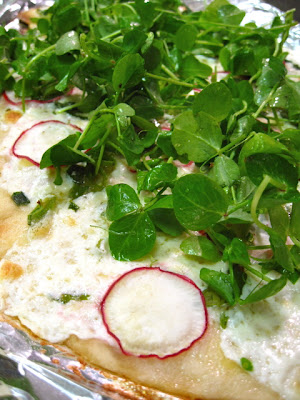 To Make The Flatbread

To Prepare The Pizzas