Allow me introduce you to my new friend, Chinese long beans.

If you have ever strolled through Asian markets, you may have noticed this unusual-looking vegetable.

Chinese long beans bring to mind a shopping trip years ago where my friend and I stared in equal parts horror and wonder at a woman’s dangling, long bean-like fingernails. This is precisely why I’ve walked passed them many times in Asian groceries and given them strange looks at Twin Cities farmers markets.

This all changed the following summer when I noticed the little boy I nannied chewing on a long bean his mother gave him as a snack. Long beans were one of his favorite snacks and he seemed content using his two and only teeth to nibble the wrinkly, green strands. Suddenly, they seemed less menacing.

Now, long beans are one of my favorite vegetables. They look more unusual than they taste and I actually prefer their sweet flavor and crunchy texture to standard green beans. If you are looking to add a new vegetable to your repertoire, try this simple preparation.

Be careful when adding the sauces to a smoking hot pan. I learned the glaze can burn when I scorched my first batch.

My Readers Teach Me How To Make The Best Salsa: Their Tips & My Take

During my first couple years after college, I worked at a church and inherited an office full of Peace Lilies. Try as I might, I couldn’t keep them alive and so all the plants were confiscated from my office never to return. And then there was the container plant garden disaster on my Fargo balcony in 2012. . .

I’ll try again when we aren’t living in a town home development, but, for now, I’ll happily accept any of your extra produce. My in-laws cultivate a beautiful garden of fruits and vegetables in the backyard of their East St. Paul home. After our last visit, they sent us back home to Iowa with a sack full of salsa veggies and burstingly-ripe tomatoes.

I’ve prepared pico de gallo before, but wanted some new ideas for making salsa-making, so I sought the advice of my readers and friends. Here’s what they had to say:

As always, their advice was spot-on. We love our golden, roasted salsa and practically eat it like gazpacho. It tasted especially refreshing accompanying simple cheese and spaghetti squash quesadillas.

The Casserole My Mom Liked

This is the casserole my mom liked.

I found the recipe in a torn and tattered cookbook. It’s falling apart and the pages crumble between my fingers. I handle them as delicately as possible, turning them with two fingers. The typed words appear to be mimeographed, not photocopied. And each page contains a single recipe.
This book is a culinary tribute from the students in my mother’s second grade class to their own mothers.
Earlier this year, I took home a stack of old cookbooks from my parents’ old house. I was surprised to find my one with mom’s hand print traced on the front cover and her name, neatly written in cursive, in the entree section beneath a recipe for Green Bean Casserole. It’s funny how handwriting doesn’t change much over time. 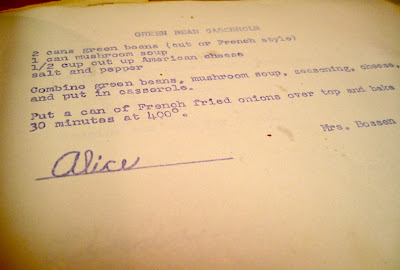 Five days ago, the fourth anniversary of my mom’s death quietly passed. In fact, it passed so quietly that I mostly forgot.
My mom must have liked this recipe. So much so, that she chose this recipe over any others for this class cookbook. My grandma was a wonderful cook. She gave me my first sip of coffee (of which I spit onto her white table cloth), whipped cream by hand, and showed me how to make homemade mashed potatoes. So, when I studied this recipe of nothing more than canned green beans, mushroom soup, American cheese, and French fried onions, I had to smile.
When my mom was grew up, canned vegetables must have been all the rage. When I grew up, they were frozen. And now that I’m an adult, I seek out those that are fresh and local.
But this must have been one of my mom’s favorite dishes, so I had to try it. In honor of my mom, I made the casserole, almost exactly as it was written, adding a few additional seasonings. I tried to restrain myself so I would not ruin the integrity of the experience.
I made a face as I sniffed the uncooked casserole in all of its canned glory. Fortunately, it tasted better when baked. In fact, it was pretty darn good, though I am one who enjoys that traditional green bean casserole, preferably made with canned beans.
Cheesy, creamy, salty and crispy. No wonder she liked it.
Green Bean Casserole
Recipe from Dorothy Bossen. Cookbook published by Bittinger-Wolford, 1959. Recipes compiled from second grade students, rooms six and seven, Richardson School, Cuyahoga Falls, OH. 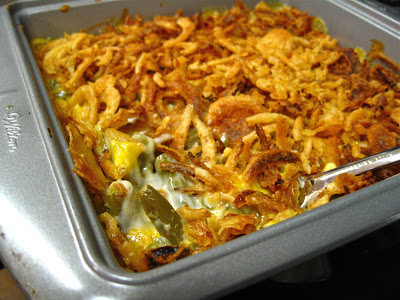 Like many other Minnesotans, I grew up making my annual pilgrimage to this Great Minnesota Get-Together.

The fair reminds me of an old high school romance who took me to ride the Sky Ride cable and read me a poem asking me to be his girlfriend.  It rhymed and was illustrated with stick-figures that depicted us holding hands.  The fair brings to mind my first taste of cheese curds.  And it makes me think of my mom’s last visit to the fair, during her last summer on earth.  She managed to rally for an hour, so we could push her around in a wheelchair and collect some of her favorite foods. These usually included a cream puff, skin-on french fries, a pronto pup, and cheese curds, of course.

For years, my running favorite treat were Australian Battered Potatoes doused in both ranch and cheese sauces.  One year, my mom and I ended a fair outing with these potato planks which inundated us with enough grease to result in horrible stomach aches.  I remember curling up in bed and praying for daylight.  And thus, I never ate Australian Battered Potatoes again.

As an adult, my visits to the fair are brief, but no less anticipated.  The crowds and the heat drive me batty.  Now that we live out of town, a weeknight jaunt was no longer an option so we gritted our teeth and visited on the last Saturday of this year’s run.  The day hot and the sun relentlessly beat down on us as we ran between un-air conditioned buildings and scouted for spots of sidewalk shade.  We bumped into the people who randomly stopped mid-step, avoided collisions with massive strollers, and waited in lines for bathrooms.

By 10 a.m. we had already laid a base of coffee within our stomachs and added $5 cheese curds from the Mouth Trap in the food building. 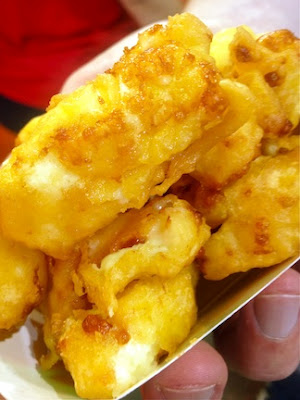 I’ve had the curds from the Mouth Trap and I’ve had curds from the stand on Dan Patch.  Personally, I choose to just go to the Mouth Trap.  There’s nothing significant that I can add to the MN State Fair cheese curd conversation so I will end by saying I like these.  I always like these, and I don’t visit the state fair without these.

Next, we stopped at My Sausage Sister & Me, a vendor also located in the food building.  I have never visited them before, but read many positive reviews of their Great Balls Of Fire, $5.50, a new offering. 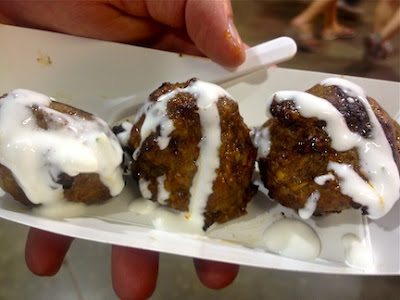 These meatballs were by and far, the best thing we tasted at the 2012 fair, if not at any fair.  They were notably juicy and compellingly spiced.  Not quite like traditional sausage, not quite like jerk, and pleasantly spicy.  They brought to mind Spoonriver’s flavorful lamb burger.  My Sausage Sister & Me offers a variety of squirt bottles of sauces.  We chose the creamy cucumber sauce which jived well with the strong flavors. 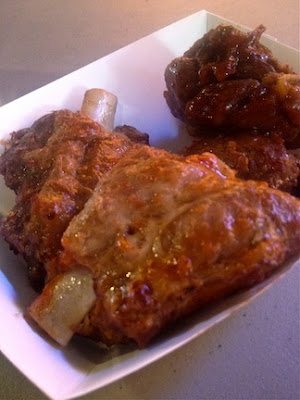 The pork was tender and moist, and cleanly fell off the bone.  They were fatty in a pleasant way and we enjoyed the sauce which was slightly spicy and sweet without being too sweet.  Overall, we enjoyed the BBQ ankles, but thought the meatballs were better.  I wished the ankles had a little crust or crunchiness.

Saturday’s beverage breaks included Lift Bridge’s Hop Dish, $4.50, from the Ballpark Cafe.  Jake thought Hop Dish tasted a lot like Bell’s elusive Hopslam, his favorite beer, adding that it had a “similar start with a smoother finish.”  He enjoyed it so much that he tried to find it in the stores that evening only to learn it’s not available, yet, in bottles.

We shared a refreshingly cold Black Cherry Soda, $3, from the Spring Grove Soda Pop stand.  We both thought it was pretty tasty with no complaints.  I was satisfied with a few sips since it was so sweet my lips were sticky.

The third new food we tried was a cannoli from Ole’s Cannoli.  Cannoli’s happen to be one of Jake’s favorite desserts. 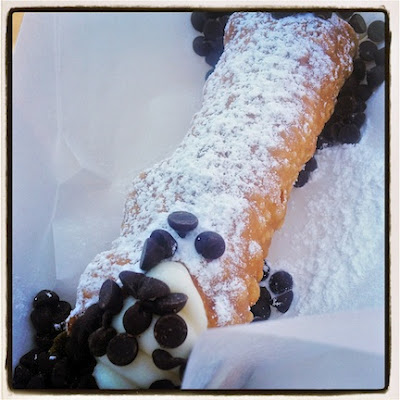 Jake ordered a plain cannoli with its ends dipped in chocolate chips, $4.50.  The cannoli was generously sized.  Its shell was crispy and the filling was thick and slightly tart, reminding me of cheesecake.  Jake had no complaints.  As an individual who doesn’t routinely seek out desserts, I found two bites enough.  I have a low threshold for desserts that are rich and sweet.

My last bite at the fair was a fried onion blossom.  Ever since Fargo’s Ribfest debacle in June, I’ve had a hankering for an onion blossom.  I forked over $8 for this large monstrosity. 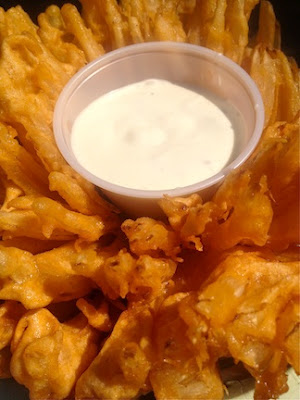 The batter was crispy in a mouth-puncturing way and tasted like it was seasoned with nothing in particular.  The ranch dip tasted cheap and at least one, heaping tablespoon of grease pooled on the bottom of the plate.  The only redeeming qualities of this onion blossom were that it was fried, the onion was tender and sweet, and it wasn’t the $1 shrimp cocktail.

And with this terrible onion, our brief 2012 Minnesota State Fair visit came to a close with little nausea, stomach discomfort, or ailment that couldn’t be cured with a good nap.

Farm to Fork, A CSA Series: If Not For The Grace Of A Good Vinaigrette

Visit Simple, Good, and Tasty for the latest installment of my Farm to Fork: A CSA Series. 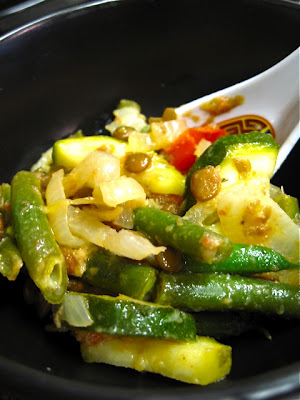 Despite boxes of produce from our Bluebird Gardens CSA share, the past couple of weeks were all about food fails.  A good vinaigrette was the only exception.  I added it to a cold, Cafe Latte-inspired salad and re-purposed it into a warm salad.

I’ll meet you there