Since we live within earshot of the Ribfest stage erected in the Fargodome parking lot, our sleep had been a little worse than normal.  80’s hair bands and country music rocked our walls from 8-11 p.m.
On Wednesday evening, we patiently waited until the concert was over before we slept.  On Thursday, the music began at 9 p.m.  I frantically unearthed our place, searching for an earplug.  Any earplug. Even a dirty, crusty one.  When my search ended in failure, I contemplated scotch or valerian root.  Fortunately, I fell asleep with neither.  Just a pillow wrapped tightly around my head.
On Friday evening, we visited to sample some ribs.  I felt exhausted and left early.  Navigating through the tightly packed crowd proved challenging.
On Saturday afternoon, we settled in for an afternoon nap.  As soon as we began to fall asleep, 80’s hair bands started their extensive sound checks, tearing us from any catch-up sleep.  We shrugged and thought, “If you can’t beat them, join them.”  Then, we meandered towards the Fargodome.  I was longing for a blooming onion and we wanted to try other rib vendors.
We stop to grab cash.  As I wait in line for the ATM, a strange man steps behind me.  He smells like liquor and asks us if the ATM has a limit.  Of course we have no idea, and he continues to spin woe-filled tales of ATM’s and dollar limits.  He and Jake make small talk about the stranger’s biking.
As I finish my transaction, I am jolted to attention when the looming stranger reads my full name from the ATM screen and announces it back to me.  Then he laughs.
My feistiness activates.  I don’t acknowledge his comment or turn around, determined to finish the transaction as quickly as possible.  I debate whether I should ignore him or confront.
The whole situation brings to mind the only time I ever confronted a stranger’s brazen inappropriateness.  One afternoon, when I lived in North Minneapolis, I visited the CVS on West Broadway.  As I exited the store, a man made obscene catcalls.  I was furious by the injustice of not being able to run an emerency errand for special lady products, unscathed, and told him (in other words) to “Go fly a kite.”  The man launched towards me as I sprinted towards my car.  I managed to shut and lock the door as his hand reached the handle.  I don’t remember much except driving like hell.
This time, I kept my mouth shut.  Jake and I left the ATM and briskly walked towards the festival.  Suddenly, Jake beaconed me to run across the street while oncoming traffic raced towards us.  We turned around to see the strange man running after us.  After we passed the festival gates, we zigzagged through the crowd.  Jake caught the man staring at us. The man quickly looks away.
We decided it was best to quietly leave and meandered through the exit.  Maybe we overreacted, maybe we didn’t.  All I know is that something didn’t feel right.  Jake is almost never rattled by anything but his instinct said to “leave” and so we listened.
I was annoyed that I got scared and annoyed that I didn’t get my blooming onion.  However, I was not annoyed about missing the Warrant concert.
Fargo sits along the path to Western North Dakota’s chaotic oil activity.  I’m going to postulate that our location, a huge festival featuring meat and overflowing beer, and a concert by a band whose music rocks strip clubs everywhere might draw some interesting folks.
We ventured to Moorhead, MN, where I chose Chinese take-out from Snapdragon, a joint recommended by a co-worker.  We chose the Korean stir-fry with beef and vegetables, General Tso’s chicken (both extra spicy) and an order of crab wontons.  Our bill totaled approximately $28, plus tip.
The Korean stir-fry actually contained some heat.  I’m not sure why the beef looked so pale, but it tasted like beef and contained fresh carrots, cabbage, mushrooms, and zucchini.  Baby corn never thrills me but overall, it was a solid stir-fry. 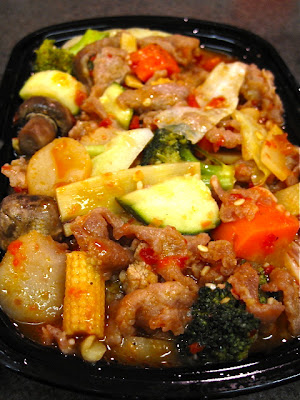 The General Tso’s chicken was crispy.  Maybe a little too chewy, but at least it wasn’t soggy.  The sauce was tangy and tasted like it might have contained ketchup.  Jake preferred this dish. 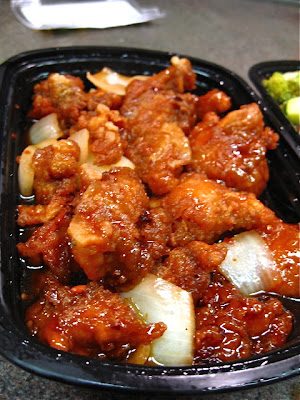 Like every other version of cheese wontons, we enjoyed the crab-cheese wontons.  We received eight packed into a nifty foil-lined bag and dunked them in sweet and sour sauce.  Of the four Chinese food restaurants we have visited in Fargo-Moorhead, Snapdragon seemed the freshest.  However, we will continue our search for our favorite version and welcome your suggestions.