The first time I encountered knoephla soup occurred during a solo road trip to Fredonia, ND.  Last fall, I had stumbled upon the site Ghosts of North Dakota which documents ghost and near-ghost towns throughout the state.  I became enamoured with the website’s stunning photography and its readers’ compelling antidotes.  Fredonia had caught my eye because a reader mentioned Home Plate Cafe, a restaurant offering Russian-German specialties.

At Home Plate Cafe, I lapped-up every drop of my knoephla soup.  It came as part of the hearty meatball lunch special which probably cost less than $7.  The broth had a light texture and mouthfeel, even though it shimmered with butter. 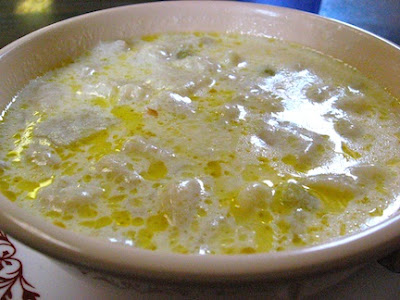 Translucent shards of celery and celery floated in the soup, amidst tender potatoes.  Its knoephla dumplings were shaped as diversely as snowflakes.  Unfortunately, Fredonia is two and a half hours from Fargo; west to Jamestown and south through the rural back roads of North Dakota.  I hope to return, someday, for another meal.

Since our move to North Dakota, I’ve learned a little about the state’s German-Russian heritage.  Knoephla soup is one of their food traditions and makes its appearance in restaurants all over this region.

My newly found fascination with German-Russian cuisine has resulted in my self-proclaimed knoephla soup quest.  I am going to try as many versions of khoephla soup as I can and create a version at home, drawing from my favorite versions.

This weekend, I stopped by Kroll’s Diner, a local chain with four locations in North Dakota.  My takeout bowl of knoephla soup with saltine crackers cost $4.99, before tax and tip. 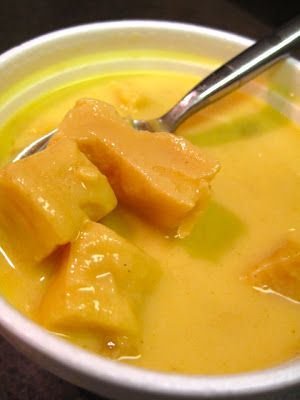 The broth was salty, verging on too salty.  I debated on whether or not I wanted to dilute the soup with a little milk.  The knoephla dumplings were abundant and I was relieved when they tasted lighter and fluffier than they appeared.  The broth left a strong, bouillon aftertaste in my mouth.  I also noticed small pieces of translucent onion and occasional chunks of creamy potato.
This afternoon, I ordered a bowl of knoephla soup from CJ’s Kitchen, to go.  This bowl’s size seemed comparable to Kroll’s Diner and cost $5.50, before tax and tip. 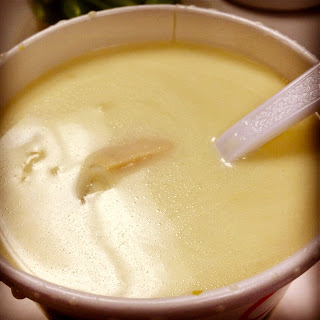 CJ’s knoephla soup was almost as salty as Kroll’s Diner’s.  The broth’s flavor reminded me of clam chowder and didn’t leave a bouillon aftertaste.  The dumplings were dainty and their texture was fluffy.  In addition to small chunks of potato, CJ’s version included some bits of chicken.
Overall, these two Fargo versions were tasty and comforting enough, but quite salty.  I preferred CJ’s by a small margin and will continue my knoephla soup quest.  Feel free to suggest your favorite versions of knoephla soup, recipes, or tips.
Jen’s Knoephla Soup Quest Ranking:
1.  Home Plate Cafe, Fredonia, ND
2.  CJ’s Kitchen, Fargo, ND
3.  Kroll’s Diner, Fargo, ND

I hope this BBQ tofu bun makes you feel things

Some pandemic cooking: Teaching Jake how to set up