We haven’t gone out for Mexican food since we moved to Fargo in October.

I didn’t think I liked Mexican food until I traveled through Mexico with my friends.  Upon my return, I promptly fell in love with the Twin Cities’ many markets such as El Burrito Mercado and Mercado Central and regularly visited restaurants like La Sirena Gorda and Los Ocampo.

As far as I can tell, La Unica is Fargo and Moorhead’s only Mexican market.  The shelves are sparsely stocked, though they sell some basic herbs and spices, sweet potato and pineapple empanadas, frozen tamales, pico, fresh corn and flour tortillas, and barbecoa beef cheeks on Saturdays.  I hear they started offering tacos on Saturdays.

La Unica Mexican Market
2615 12th Avenue S
Moorhead, MN 56560
The empanada’s are sweet for my tastes, but the tortillas are delicious.  Once, I bought the most spicy, garlic-filled green salsa and we were dismayed to learn it was a one-time experiment, of sorts.  The hospitable owner recommended Mango’s when I asked his favorite Mexican restaurant in Fargo-Moorhead.
Mango’s has been on our date night wish list for quite some time and I was excited to read Nikki Berglund’s (the lovely Proprietor and Wine Manager of Bernie’s Wines and Liquors) review published in the High Plains Reader.  Nikki’s review was enthusiastic and so we planned our Saturday date night at Mango’s.
Jake is a fan of Mexican food, Americanized or not.  I have not typically enjoyed Americanized Mexican food and avoid it like the plague.

Mango’s is located on Main Avenue, an eclectic stretch of road that runs from Downtown to West Fargo.  Main Avenue is a jolting site to those unaccustomed to urban sprawl and we aptly nicknamed it Scary Street when we first moved here.  Now, I am less scared and more intrigued by its melange of martial arts warehouse studios, industrial services, dingy bars, used car dealerships, day cares, and barber shops (sometimes all in one building).  Main Avenue’s saving grace is its occasional ethnic restaurant or market, such as Mango’s.
We were quickly seated amongst other friendly families.  I noticed diners receiving giant mugs o’ brightly-colored margaritas, though we opted for $2 Pacifico’s.  Mine arrived in a frosty mug with lime. Jake wasn’t so fortunate.
Our waitress brought us complimentary chips and salsa that we enjoyed pouring from a carafe. 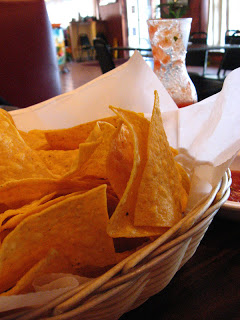 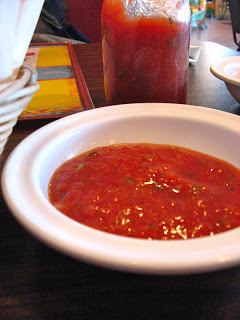 The chips were fresh and crispy and we especially liked the fresh, slightly spicy salsa.
We remembered to ask for the spicy version that Nikki recommended. 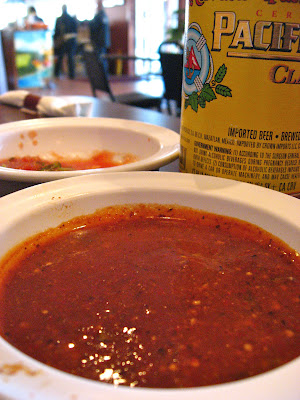 This version was much spicier.  In addition, its flavor was smokier and more intense and we enjoyed mixing the two salsas together.
I was initially disappointed that Mango’s menu items appeared so Americanized, but attempted to toss my fear of Americanized-Mexican food aside with the attitude that any food can be delicious when made with care.
To begin, we ordered the Queso Fundito, a hot cheese dip with chorizo. 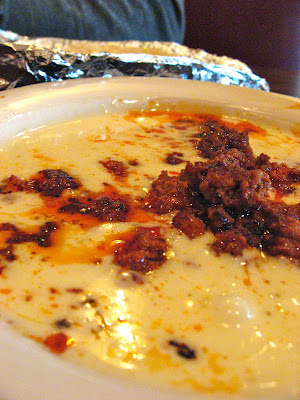 This bowl was larger than necessary for two people and delicious in the most indulgent way.  The creamy cheese sauce clearly tasted homemade.  And it melded with the glistening chorizo crumbles and drippings that lent complex hints of spices like cinnamon.  Only three corn tortillas accompany this large bowl of cheese, so you may want to order extra (or chips), or pack the remaining dip to-go.
Jake was thrilled at the sight of his molcajete, a large stone cauldron filled with sizzling beef, veggies, and more of Mango’s addicting cheese sauce.  Basically, it was like fajitas on steroids. 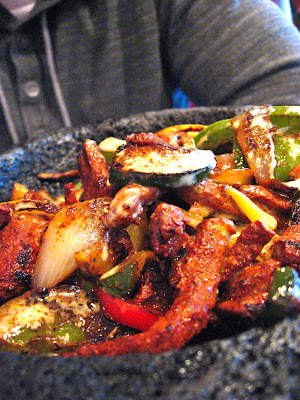 All of the elements were coated in a flavorful spice mixture that was delightfully salted  The beef was crispy on the edges and tender, and we enjoyed the variety of fresh vegetables including zucchini.  Plus, how could anything taste bad when coated in Mango’s cheese sauce?
Jake’s molcojete was accompanied by a large portion of fresh guacamole, warm corn tortillas, rice, and refried beans.  I am usually bored by refried beans, but found Mango’s light and fluffy instead of leaden, and smokey.
I ordered the grilled tilapia.  Call me foolish for half-expecting to receive whole, head-on fish in Fargo.
Side note: One of my favorite restaurants in Minneapolis was La Sirena Gorda, recently closed.  They specialized in affordable Mexican seafood and I loved their clam chowder and spicy seafood soup.  I once dated an individual who ripped me a new one when I spoke of a restaurant that focused on Mexican seafood.  He informed me that “Mexican seafood” was an oxymoron.  An impossibility, since Mexico is landlocked and has no coastal regions. . . someone should show this gentleman a map. 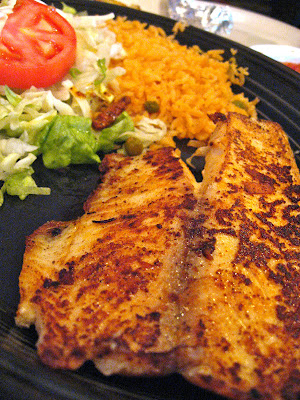 I did not receive the whole fish of my dreams, but the tilapia fillet was quite tasty.  The fish tasted fresh and its texture was moist and succulent.  I also enjoyed the fish’s seasoning mixture.  Really, the fish was cooked and seasoned well.  The tomato slice was under-ripe and I could take or leave the sour cream and ice burg lettuce, but enjoyed the flavor of the rice.  Often, I find versions of this type of rice to be bland and boring, but liked Mango’s fluffy texture. More importantly, it tasted well-seasoned.
Finally, I wanted to try their flan.  99% of the time, I pass on dessert, but make exceptions for this silky custard dripping with caramel.  Mango’s flan arrived with flourishes of whipped cream and chocolate syrup. 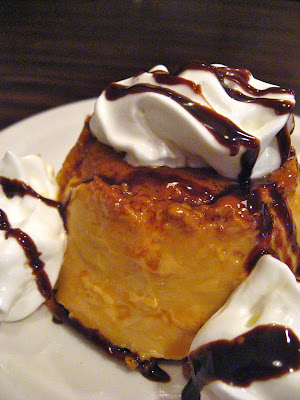 The flan had a rich, caramel flavor.  However, it’s texture was very thick.  The flan near the bottom of the plate was very dark brown.  It did not exactly taste burned, but the texture was crumbly and putty-like.  I’ll pass on the flan next time.
Overall, we enjoyed our first visit to Mango’s.  It may not have offered items as authentic as I had hoped, but the food was thoughtfully made with fresh ingredients and carefully seasoned.  Many dishes seem to involve cheese sauce, but at least it’s a delicious cheese sauce.  And homemade, to boot.
The chips, fresh salsa, and cheap beer in frosty mugs, alone, would be enough to bring me back.  I look forward to returning for my own mocajete or to try one of their other entrees.  Mango’s even offers their molcajete for two on Sundays for less than $20.  The affordable food and beverages prices and warm and friendly atmosphere also made for a pleasant date night.
I would welcome any comments about Mexican food in Fargo-Moorhead and for someone to demystify the beckoning circus lights of Paradiso.  How do Mexican Village and Juano’s compare, and are there additional options in the Fargo-Moorhead area?  Hell, I’ll even take an hour’s radius.