A Taste Of Korean Culture Camp: Pork Stir-Fried With Cucumber

Brace yourself for another non-recipe recipe.

The art of recipe writing is a skill in which I could stand to improve. Each time I set out to adapt or create a recipe for blogging purposes, I’m caught in a whirlwind of improvisation. Before I realize it, I’m left with another non-recipe recipe.

I don’t recall much about my childhood summers at Korean Culture Camp, except that the tomboy inside of me was terrified of performing the fan dance in a hanbok, and I always looked forward to lunch.

My Korean Culture Camp booklet includes a simple beef and cucumber stir-fry, a perfect meal for a Friday evening. Not quite a week night and not quite a weekend. 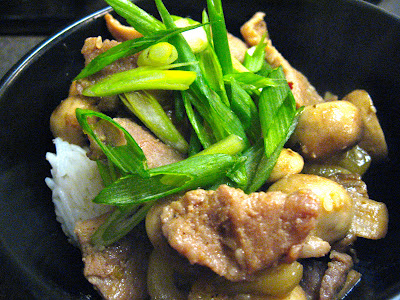 I substituted tender pork for beef and spiked the marinade with a split habanero and cayenne pepper. I started by following the booklet’s recipe and added more ingredients to amp up the flavor. The sesame seeds add a nutty flavor that is rich like peanut butter. Overall, it’s a highly addictive dish that I enjoyed for breakfast, lunch, and dinner.

The ingredients, below, provide a rough guide for 1/3-1/2 pound of meat. You only need enough marinade to coat your meat. If you do not have mirin, sweeten the soy sauce with sugar or honey until you like its flavor. As you cook the meat and vegetables, savory juices will meld with the marinade and create a umami-filled sauce.

Start with equal parts soy sauce and tamari and test for balance (I preferred a little more soy). The rest of the ingredients can be added to taste, but use the sesame oil sparingly, as it’s very fragrant. 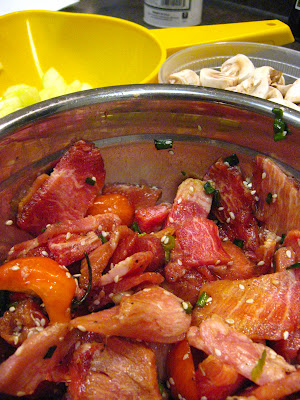