May 13, 2013 / Jeni / 0 Comments
Apparently, I’m afraid of lobsters.
On the last day of seafood class, our teacher ordered live Maine lobsters. She even ordered extras for the students who wanted to purchase them for home cooking. This was the only opportunity on which I passed to purchase food the school purchased for special demonstrations. Once the teacher handed the lobsters over to my care, I was afraid I’d feel responsible for their well-being. They would have been more likely to live in my bathtub than ever become food. It mostly came down to the thought of driving home with them in my car. I knew I’d freak out.
The lobster demonstration got off to a rough start. One of our teachers had snuck a slinky, wooden snake into the box before we reached the kitchen and when we opened the box, I screamed. Before I could make sense of the situation, I remember wondering why on earth the supplier would include a snake with the lobsters.
Our teacher gently removed the lobsters and examined each one for movement. 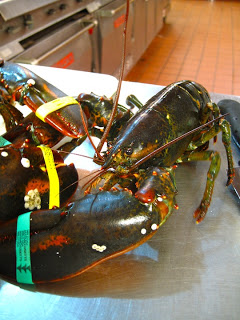 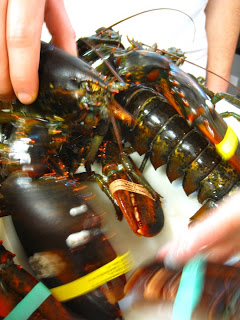 We learned that active lobsters taste better. Those that barely move are known as sleepers and are close to death. They’re still edible but won’t taste as flavorful. Our instructor flipped a feisty lobster on its back and tickled its little pairs of legs, known as swimmeretes, to identify whether it was a male or a female. A female’s swimmeretes are soft, while a male’s are hard. This shouldn’t too hard to remember. . . The lucky students who bought the lobsters got to take home the females that were rich in roe. 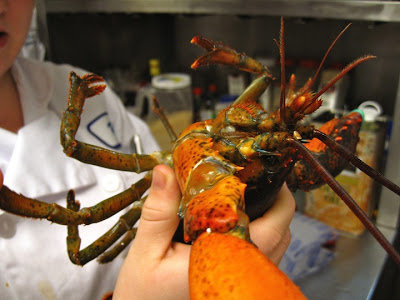 Before she passed one around the class, she firmly stated the afternoon’s one and only ground rule: Do not, under any circumstance, remove a rubber band from a lobster’s claw. No one did.

Then, she piled the rest of the lobsters onto the demonstration table. Some of them may have been sleepers while others explored the table as they waved their long, delicate antennas. Our teacher had set out a container of hot water to rinse the lobsters after they been cooked and broken down. I noticed one lobster’s antenna wiggling dangerously close to the hot water and leaped to its rescue until it touched my hand. A kind classmate came to both of our rescue. 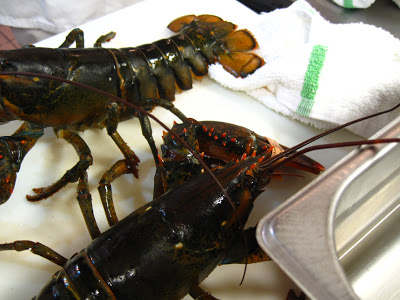 I noticed that I started feeling funny. My face flushed with heat and I broke out into a cold sweat. When the lightheadedness hit, I knew there was a distinct possibly that I might faint. I’ve prided myself on maintaining a (mostly) composed demeanor in the kitchen and trying to avoid giggly and squeamish gender stereotypes. This has also meant being willing to taste anything, handling raw meat like a champ, and throwing down in the dish room. I didn’t want to end this winning streak by being the girl who fainted at a lobster. Plus, I had laughed when I found out someone fainted when the Meats class broke down half a cow. Call it karma.

Our teacher placed the lobsters into a brazier of boiling water and quickly covered the pot with a lid. No, the lobsters did not “scream” or make dramatic scratching noises as they tried to climb out from the pot, but for someone who’s never taken part in dispatching an animal, it still felt unsettling. A minute later, she lifted the lid and we all flinched when we saw they were still writhing in the hot water.

Somehow, I did not faint.

Phobia aside, the demonstration was worth the taste. During our last seafood demonstration featuring clams, mussels, and oysters, I was surprised when a quarter of my classmates left because they thought they were gross. To my dismay, everyone stuck around to taste lobster, but fortunately there was more than enough to go around.

We compared previously frozen warm and cold water lobster tails broiled in their shells to our freshly boiled Maine lobsters. It was hardly a contest, as the Maine lobsters’ texture was stunningly more delicate and silky than the other varieties. One lucky student took home the lobster shells to make a seafood caldo broth while I stuck around to suck the tiny shards of meat from the legs. 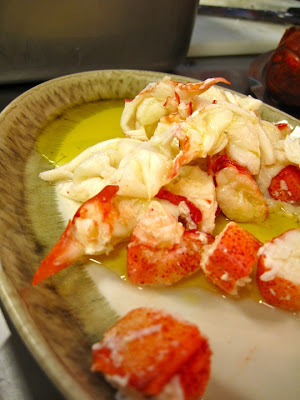 We wiped clarified butter from our faces and thus ended seafood class.

It’s summer break now. I took my last final and turned in my final project. Maybe by the fall I will have enough gall to reconsider the upcoming field trip to North Dakota State University’s slaughterhouse. So far, I’ve maintained that I’m just not going. If I almost fainted at a lobster, who knows what will happen?

Worst case scenario is that even if I do, in fact, faint, it’ll make a good story, right?