India Palace in Fargo: A Spicy Dish With A Curious Disclaimer

May 7, 2013 / Jeni / 1 Comment
Our first visit to India Palace, Fargo’s newest Indian restaurant, brought tears of joy and tears of pain to my eyes. I wished it hadn’t taken us so long to get here.

Since moving to Fargo, we’ve been quite loyal to Passage to India. We dined at Karma, once, and found it bland so we stuck with what we knew. In the Twin Cities, there are at least five India Palaces, several of which are part of a local chain. I was initially concerned Fargo’s India Palace also a part of a chain, but from what I can tell, it’s not related. In January 2013, Eric Daeuber wrote a review of India Palace that was published in the Forum. He spoke well of the food and service, but the following description stuck in my mind:

“When tradition demands something more like the Indian food your Midwestern mother used to make, the popular Chicken Tikka Masala brings a kind of comfort food familiarity, and a little smoke, to the table.”

Despite the fact that Daeuber gave India Palace’s food a four star rating, I couldn’t move past the comical mental image of picturing my own Midwestern mother cooking Chicken Tikka Masala. She never ate Indian food and avoided anything spicy. It would have been dreadful. Recently, a friend and chili-head assured us the food was spicy and well-prepared, so visited on our next date night.

On this Saturday evening, we were warmly greeted and seated immediately. We ordered a couple Indian beers and our server expertly poured them into fancy beer glasses. For dinner, we chose a few orders of garlic naan ($2.99/order), raita yogurt sauce ($1.99), Paneer Masala ($10.99) and Dhamaka Balti with lamb ($14.99), a style of dish described as being cooked in a special pot with white wine, tomatoes, bell peppers and onions and seasoned with cumin, coriander, cassia bark and ginger. Most curiously, the following disclaimer accompanied this particular Balti dish: 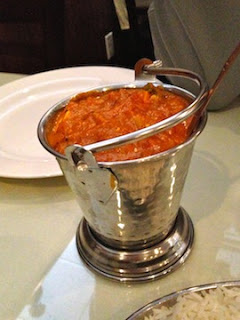 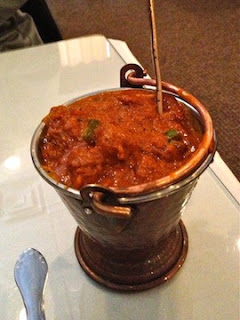 Top left: Dhamaka Balti with lamb. Top Right: Paneer Masala
The Dhamaka Balti with lamb was wonderfully spicy. Despite the fact that I was weeping tears of pain and sweating profusely, I was really happy. Completely giddy on the rush of endorphins released by the hot peppers. The Paneer Masala was milder than the Dhamaka Balti, but it was still notably spicy and both dishes were laced with chunks of hot peppers. Those who aren’t fond of heat can certainly order dishes mild. Spiciness aside, the sauces had compelling flavors from which the heat did not detract. I also appreciated that the Balti dish contained a generous amount of tender lamb.
Both entrees came with a plate of fluffy basmati rice fragrant with a subtle, warm spicing. 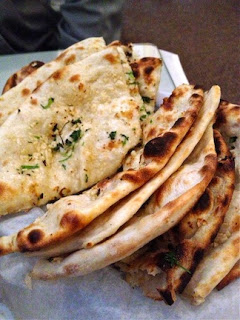 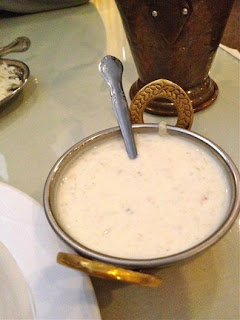 We sopped the curries up with the garlic naan that was blistered and soft in all of the right places and cooled them down with raita yogurt sauce. Both were respectable versions of themselves.

In conclusion, we were thrilled with our first visit to Fargo’s India Palace. Our meal wasn’t cheap, but it was flavorful and thoughtfully prepared, the curries were appropriately filled with their respective proteins, and the service was warm and hospitable. Most exciting of all, they actually make spicy food spicy. I was getting bored with turning to Buffalo Wild Wings to satisfy my spicy food cravings.

Kudos to India Palace for being bold and bringing us heat.