What The Ho Hey’s A Shamrock Shake?

It’s an official snow day. At least, as far as my school is concerned.

I got all of my errands done on Saturday morning. Then, my husband and I hunkered down at home. The snow began to fall Sunday morning and swirled late into the evening.

I felt drained over the past few weeks, so the quiet weekend was a good opportunity to recharge, although I felt a little stir-crazy. By Monday morning, I felt very stir-crazy and even bored enough to clean. I had to get out of the house.

Our parking lot was nicely plowed behind each spot. Armed with a tiny shovel and a scraper, I unearthed my car and redistributed the tiny mountain of snow behind it. The moment I pulled out of the crater I had painstakingly dug myself out of, someone rounded the corner and pulled into my spot. I cursed under my breath. In order to reach the city street, I had to literally gun my engine and hurl myself through another pile of snow. I quickly called off the rest of my errands and struggled across the street to McDonalds to answer one burning question.

What the hell’s a Shamrock Shake? 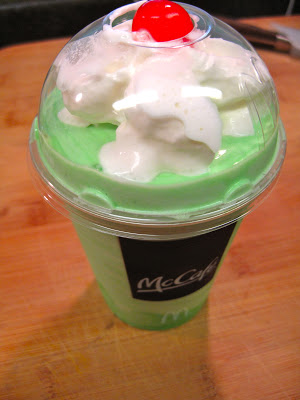 I have never had a Shamrock Shake. I’ve never been in proximity to a Shamrock Shake. I haven’t seen anyone drink one in school or even in college. And, although my parents picked up fast food meals frequently enough, they never purchased a Shamrock Shake. During the past week, my friends’ odes to this shake on Facebook and Twitter fueled my curiosity.

My husband is also a fan of the Shamrock Shake’s release each spring. When I asked him if it tasted like mint, he replied, “No. Not exactly.” I kept wondering what on earth this meant. How does this green shake not exactly taste like mint?

Since I was already at McDonalds, I picked up a regular-sized order of their new Fish McBites. This new product is made of Alaskan Pollack, certified by the Marine Stewardship Council as sustainable. The Shamrock Shake and regular-sized Fish McBites cost about $6.30.

Unfortunately, my particular shake did not come with a straw so investigated with a spoon, cherry first. The thick, green liquid dribbled everywhere. 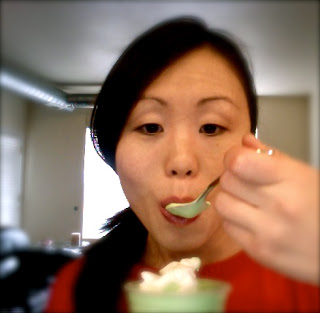 The shake did, in fact, taste faintly of mint. I couldn’t really discern any other flavors except sweet and tooty fruity. So that’s what Jake meant when he said “not exactly.”

So yeah. . . I just didn’t really like it. I shoved it in the freezer and left it for Jake.

I liked the Fish McBites better. 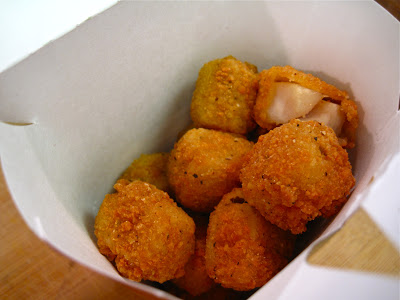 I threw out the nugget that looked like it was fried without half it’s breading. The fish was kind of gray and I thought that was gross. 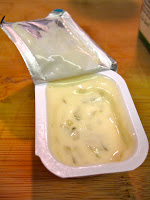 The breading was crispy and course with cornmeal. Not very greasy. The fish didn’t taste that fishy and was moist inside the breading. I drenched the bites in fresh lemon juice and lightly dipped them into the tartar sauce. It was lighter than I expected and not too “mayonnaisey.” Better than I expected for being packaged.

I wouldn’t go out of my way to get more Fish McBites, but I also wouldn’t turn them down. I’ve had far worse fast food in remote joints between Minneapolis and Fargo. This is all coming from a girl who has never tried a Filet-O-Fish.

The make-your-own Bap with fried tofu was excellen

The food from Sole Cafe is still really good.

Having a lot of fun grilling on our deck. Gochujan