I-94 Is Delicious: The Brass Lantern, Alexandria, MN

On Saturday morning, I found myself on the road again.

I’ve become intimately acquainted with the stretch of Interstate 94, between Fargo, ND and Minneapolis-St. Paul, MN.  And I find myself in a love-hate relationship with the journey.  At the end of the three and a half hour drive, I am usually spent, especially at the end of a busy week.

I enjoy scanning the local radio stations along the way.  When two stations simultaneously played Paula Cole’s Where Have All The Cowboys Gone, I was filled with glee.  This was followed by Aqua’s Barbie Girl and something by Shaggie.  As an introvert, I enjoy the solitude of a solo road trip and spend most of the drive singing like a lunatic.

Billboards have become as familiar as friends.  I nod at the grinning Keith of Keith’s Kettle Family Restaurant and and wonder when OMG meant “Obama Must Go.”  The terrain is mostly flat and mostly boring, unless you look closely or take time to wander off the beaten path.

This time, I drove without a specific plan of where I wanted to stop for a meal.  I just drove until I was hungry and noticed my blinks dangerously increased in length.  Thus, I exited in Alexandria in search of breakfast.  An appointment in St. Paul left me with less than an hour to choose a restaurant and eat, so I conducted a quick Internet search, settling on The Brass Lantern.  It was close to the freeway and ranked on Urbanspoon, which I realize is as helpful and prone to astroturfing as Yelp.  When it comes to outstate Minnesota, I have to take what I can get in terms of online reviews.

I had a difficult time finding The Brass Lantern, located in what looked like a strip mall.  The restaurant’s interior was dated and dark, and I hesitated when it seemed devoid of customers this late Friday morning.  I asked a server if I could order breakfast.  She answered affirmatively and invited me to sit in the front section of the restaurant that faced the inside of a mall where a few other customers had settled.

When I inquired about using the restroom, they replied, “It’s in Herberger’s.”  I spent the next ten minutes holding my bladder and silently cussing as I wandered through the dead mall and weaved through cosmetics and clothing.  A friendly salesperson finally guided me through the department store maze, to the cleverly hidden bathroom.  Aren’t they always?

By the time I returned to the restaurant, the staff had gravitated towards the other side.  I felt like Goldilocks/Sheldon Cooper as I tried out several booths in hopes of finding a seat where I didn’t feel so awkward.  I wandered to the other side of the restaurant and let a server know I had, in fact, emerged from the garishly-colored bowels of Herberger’s juniors department.  She quickly gave me a menu along with a mug of hot coffee and water.  I ordered the Western Breakfast Skillet with sourdough toast.

My meal quickly arrived and I inhaled my skillet of scrambled eggs mixed with diced bell peppers, onions, and ham a top fried potatoes. 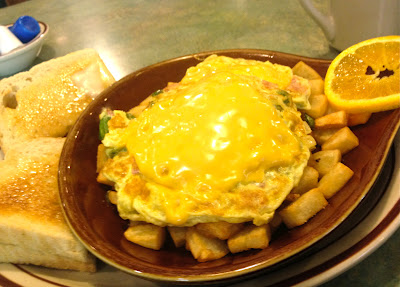 The scrambled eggs reminded me of egg foo young patties.  They were cooked to the point of being golden brown on the outside and slightly spongy in texture, and covered in melted American cheese.  Jake likes his eggs like this; cook to the point of near crispiness.  I prefer mine soft or runny.  The fried potatoes were crisp, non-greasy, and nicely salted and the buttered sourdough toast hit the spot.

As I began to eat, I overheard a server tell a regular she just learned a patient escaped from a local psychiatric hospital.  According to her friend, who was supposedly an employee at the hospital, the patient was described as dangerous.  The server and the regular agreed their best precaution was to carry their guns with them until the patient was re-admitted.  Then, the server added that she hoped she wasn’t murdered that evening. I ate quickly.

While I can’t say I’d make a point to return to The Brass Lantern, I also can’t really say I disliked my meal, well-cooked eggs, American cheese, grape jelly packets, and all.  The food and coffee were served piping hot, the skillet was not greasy, and I found the service endearing. I basked in the “hun’s” and “dear’s” and appreciated their efforts to make sure everyone’s coffee and water was refreshed.

As I paid my tally of $10, I asked for a small, to-go cup for my remaining glass of coffee to sip on the remainder of my drive.  The server provided me with a fresh tumbler of hot coffee and offered me a set of French vanilla creamers.  Not the powdered kind.  I loved her for that.

Even though I would have liked to make one more trip to the ladies room, the thought of returning to Herberger’s was too much to bear, so I ran out from the dead mall, back to my car.  I locked my car door and began to breathe a little easier as I sipped the gift of hot coffee and put some distance between me and Ms. Alexandria.