A Romp Through The Red River Valley Fair & A Gyro Rant

This past weekend, Jake headed North to Grand Forks while I drove east.

On the way to the Twin Cities, I stopped at the Red River Valley Fair in search of lunch.  At 11 a.m., the temperature had already crept well into the 90’s and the fairgrounds were mostly deserted.  I parked in a dusty gravel lot and wandered through the unattended gate.  Some of the animal exhibits appeared to be open while the midway was closed until noon. 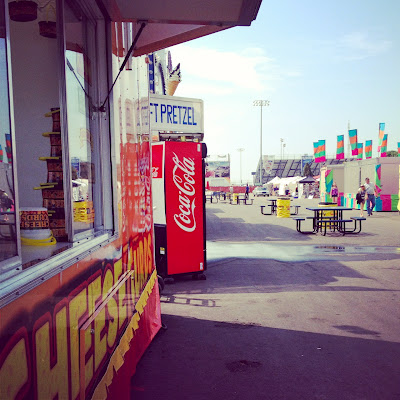 I wondered if I would only be in the company of fair employees, until I encountered a handful of adults trying to pacify bored children with fruity drinks.  Obviously, the party wasn’t in full swing yet.  The midway was expansive and rows of food stalls advertised guilty pleasures of the fried kind.  I imagined what I’d miss.  It was unfortunate Jake and I couldn’t attend together.

I meandered through the food stalls searching for a vendor who was ready for business.  Santa Lucia’s booth had food on the griddle so I stopped for a gyro (Santa Lucia is a small local chain with a full-service restaurant serving Greek and Italian food and smaller locations offering take and bake pizza).

When it comes to gyros, bigger is just not better.  I want my gyros constructed with intention and functionality by the foil cone.  Iceberg lettuce is bad, as its rendered slimy and stinky when placed on hot foods.  Onion is not optional since it cuts the richness of the meat and yogurt.  I’m down with cones of processed gyro meat as long as its shaves are thin and crispy around the edges.  Griddling the meat can be good enough.

The last gyros I bought from Aladdin’s in Fargo cured my cyclical gyro craving, but the second one kind of sucked.  Although the fries were freshly fried, they were covered in a seasoning salt that reeked of what tasted like citric acid.  While I waited, I definitely heard the ping of a microwave.  I assume it was related to my gyro because I was the only customer in the store.  I microwave food in the privacy of my own home, but I’ll be damned if I pay something else to.  On a positive note, the employee waived the charge for a side of hot sauce, which was nice.

At the Red River Valley Fair, the man from Santa Lucia’s warmed the pita bread on the griddle, gently filled it with meat, grilled vegetables, yogurt sauce, and fresh salad, and formed it into the iconic foil cone. I was surprised that the meat wasn’t shaved from a cone.  Instead, I noticed thin, rectangular meat slices like those found in frozen gyro kits.  The bland meat was saved by its garnishes.  Solid yogurt sauce, caramelized vegetables, and salad made from crisp romaine and fresh parsley. 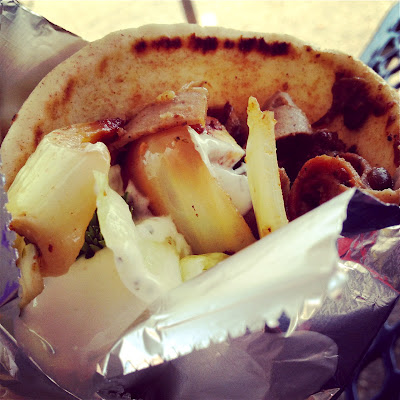 I cringed when my gyro and lemonade tallied $12, but such is the price I’ll pay in hope of street meat that just. . . doesn’t suck.

Actually, Gyros might be in the category where the bad ones are still good.  Just less good.  Kind of like pizza.

It was an odd experience eating a gyro while sitting, alone, in an empty carnival.  I savored my meal while I listened to the songs of food stand employees and returned the blank stares of ride operators.

On the way to my car, I bought a small mound of cheese curds, $6.  They were offered in about four flavors and I was kind of horrified that they were sold by buckets of increasing sizes.  Although they didn’t seem to be freshly battered, the crunchy coating was light and squeaked between my teeth.  Plus, they were as grease-less as cheese curds could possibly manage. 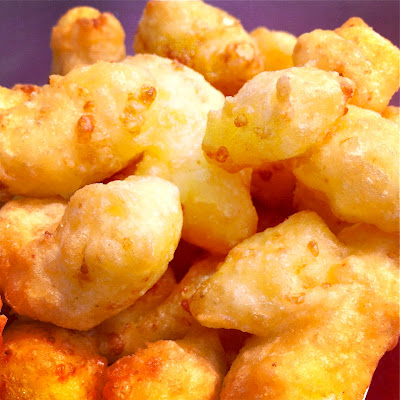 A step above the variety shellacked in that course, breadcrummy coating.

My short stay in Minneapolis was its own type of comfort food.  Nurtured by family and reunited with friends.  Cruising up and down 35W and parallel parking.  I nailed it twice on the first try.  Maybe it’s like riding a bike.

I tried to stave off home sickness when I joined a partly drunk/partly sober group of college Alma maters for a walk.  We wandered past the glowing Institute of Arts, to Eat Street where we stopped at A Slice of New York for late night pizza by the slice.  The staff patiently warmed our giant slices and tucked them into paper bags as we told stories.  Some raved about their slices of tomato and feta, while I managed to polish off a plank topped with bell peppers and gyro meat.  As if a gyro nearly 12 hours ago wasn’t enough. . .

On the way back to the Twin Cities, I briefly explored a couple of the towns I had been admiring along I-94, though I was to harried to sit down for a meal.  And as is probably typical outside of larger cities, the shops along the main streets were closed on Sunday afternoon.  I noticed The Albany Restaurant located along main street.  Its windows were adorned with handwritten pieces of paper advertising an eclectic mix of chow mein, fried catfish, and spaghetti.  I made a mental note to return.

This beautiful steeple is visible from the interstate and belongs to a Catholic church in Albany, MN. 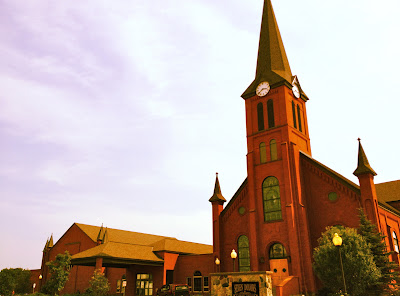 Tomorrow evening, we’re going to explore Fargo’s Downtown Street Fair.  Then, we’re heading to Remer, MN for an epic, lake cabin adventure with Jake’s siblings and cousins.  I’m leaving the laptop at home, but will update early next week.  In the meantime, you can find me on Twitter.