After spending a lazy morning lounging around The Lodge on Lake Detroit, I shook Jake from his video game trance and summoned him to lunch.

I chose Hotel Shoreham, a small restaurant mostly known for its pizza, located on Lake Sallie.  Still feeling “za’d” out from the previous evening at Zorbaz, we opted for nothing that included a “Z.”

Jake ordered a fruity beverage that ended up costing $9 and I ordered a bottle of St. Pauli Girl, $4.75, having no clue that it did not contain any alcohol.  My beer connoisseur fiance laughed at me.

We started with a basket of beer batter fried shrimp, $9.95, which arrived scalding hot and nearly grease-free. 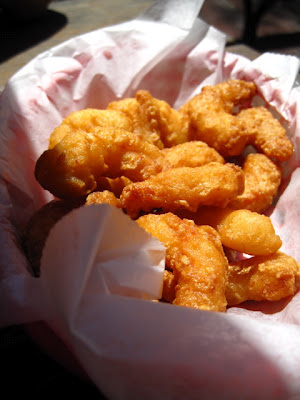 Salads came with our entrees.  The greens were fresh and crisp and I dipped them in the house dill dressing, that reminded me of that bread bowl party dip. 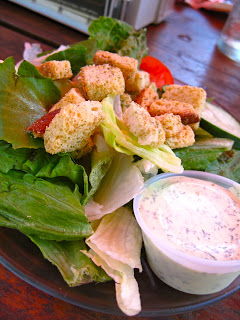 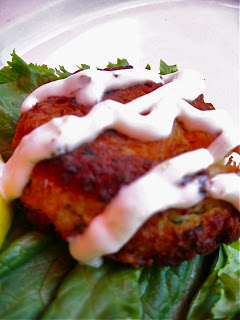 The $11 crab cake was about the size of my palm.  It’s crispy exterior was drizzled with a garlicky mayonnaise sauce.  The interior revealed some breading, flakes of crab along, and a few small lumps of meat.  Overall, we enjoyed its flavor, but felt it was pricey considering its size.  Oceanaire may charge about $15 per crab cake, but they are larger and made exclusively with jumbo lumps bound together with little more than sorcery.  Not quite the case at Hotel Shoreham, but not bad. 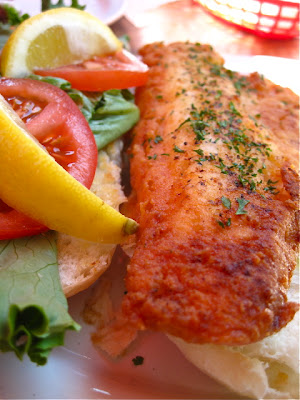 The fish fillet’s batter was crispy and greaseless, and the flesh was delicate and sweet.  We rejoiced at the toasted bun.

After lunch, we drove around Lake Sallie, hoping to find some sort of beach or dock from which we could dangle our feet.  We chased deceptive signs that pointed us towards nonexistent beaches.  We circled around luxurious lake homes and wooded lots sheltering what we imaged were the cabins of kings.  Lake Sallie must be an exclusive lake, as we could not find even a strip of publicly accessible land.  Finally, we finally found a public dock that reached into water covered in green matter so thick that birds traveled across it by foot.  We passed.

When we returned to The Lodge, I took a nap and slept off that St. Pauli Girl.

For dinner, we chose the Fireside Restaurant located a few blocks from The Lodge.  By 8 p.m., it calmly buzzed with customers and we sat on the screened porch overlooking the lake.  We felt like we’d been transported to a sleepy veranda on the deep south.  Diners leaned into their chairs and lingered over their dinners as servers gracefully allowed everyone to bask in the sunset. 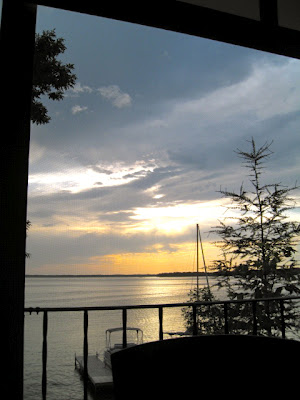 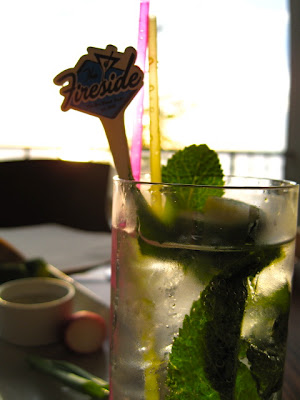 Despite the mojito’s whimsical swizzle sticks, it tasted a little off. Jake fared better with a glass of red wine. 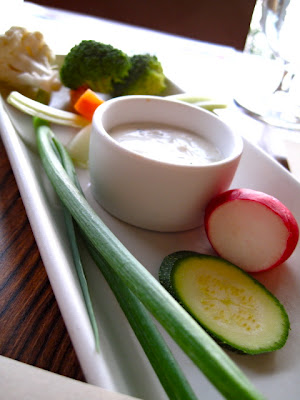 We snacked on a complimentary plate of “no-frills” vegetables and dip.

And picked out the buttery garlic toasts from the breadbasket (also complimentary). 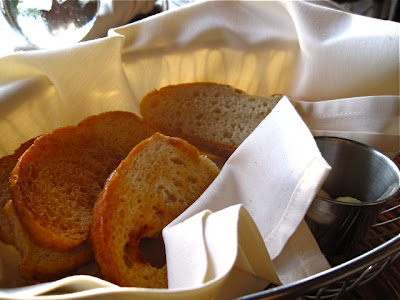 For an entree, I ordered a Caesar salad with anchovies, $6, and the Surf &Turf Skewers appetizer, $11, that consisted of bacon-wrapped beef and scallops in a “tangy honey-mustard sauce.”  Jake ordered the 10 oz. prime rib special. $23, offered with his choice of two sides.  He selected grilled asparagus and garlic mashed potatoes.

The Caesar salad greens were fresh and dotted with croutons coated in something cheesy and a little bit spicy.  Kudos for offering anchovies. 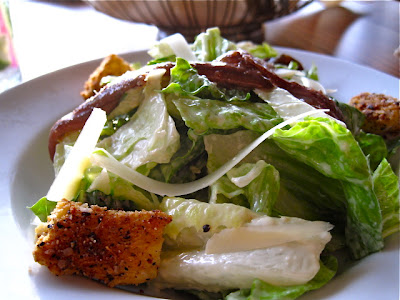 I began to feel full and gingerly tasted the skewers. 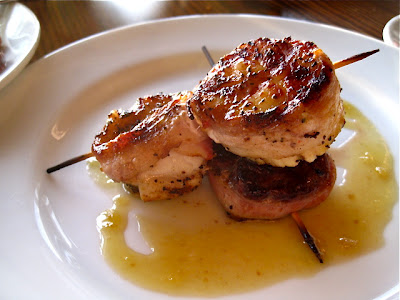 The beef was cooked to about medium and was tender.  Although the large scallops were fresh and buttery, mine contained some grit.  Jake ate the second and deemed it grit-free, pushing aside the soggy bacon which I happily ate.  He prefers bacon cooked ultra crispy while I like mine with some give.  I’d hardly describe the sauce as tasting like honey mustard.  Its sweetness tasted much more subtle and melded with the grilled meats.

Jake delicately carved bites of his prime rib and dunked them in au jus and horseradish sauce.  The meat was tender and cooked medium rare as requested. 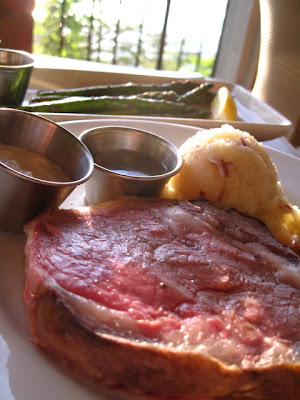 The side of asparagus was carefully grilled (ends trimmed) and garnished with a hollandaise-like sauce and lemon wedge.

Since it was the end of our vacation, we split creme brulee. 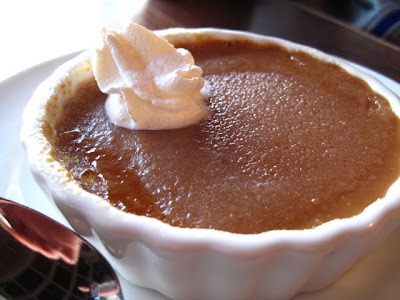 At first glance, I was disappointed the sugar topping wasn’t more caramelized.  But after I dug below the surface, I was too hooked to care.  The smooth chocolate custard tasted exactly like the essence of a chocolate brownie.  Jake began to reminisce about the brownies his late, Norwegian Grandma used to make.

We were stunned when our bill was almost equivalent to our lunch at the Shoreham Hotel.  Fireside is known as the pricier option in Detroit Lakes, but served a better-than-average meal for lower prices than what we’d find in Fargo-Moorhead and the Twin Cities.

I really appreciate the juxtaposition of Fireside’s stunning lake view and unpretentious service/atmosphere.  While the staff is down to earth, occasional customers may be more high maintenance.  I laughed as I overheard a conversation that mirrored this Portlandia sketch.  We had practically finished two courses by the time they placed their order.

Hopefully, we’ll return to Detroit Lakes this summer.  Where do you like to eat and do you have a favorite dive-bar?