Review of Our Trip Back Home Including a Return to Bangkok Thai Deli and a Vile Steam Table Sandwich.

On Friday, I made a bad choice.

I ordered a tuna melt sandwich from the hospital cafeteria steam table.

And then I proceeded to eat it.  Or at least, I attempted to eat some of it.

Regardless, it was bad choice.  Maybe I should start at the beginning. . .

Our Brief Trip Home
As I alluded to in my last post, Jake and I returned to the Twin Cities to spend time with our families and catch up with friends over the long Thanksgiving weekend.

Oops!
On Thanksgiving, Jake and I met my side of the family at a residence to which we had never been.  Engaged in a semi-heated political debate, neither of us paid much attention to the specific address or GPS directions as we mindlessly exited the car and began walking to a house.  Jake thought I knew where I was going and I thought he knew where he was going.  Somehow, we were both following each others’ lead, not only walking towards a strange house, but into it.  Jake finally asked “Are you sure we are at the right house?” as I was in the process of removing my second boot.

I paused mid-stream, balancing on one foot, as I examined the individuals in the living room.  I did not recognize anyone, but wasn’t overly concerned, since they could have been relatives or friends of friends of relatives we hadn’t met yet (my dad is newly remarried).  However, when Jake mentioned that he hadn’t been paying attention to the address and had just followed my lead, I got a little nervous and tried to put my boots back on as quickly as possible.

A woman noticed us standing in the entryway and walked towards us with a furrowed brow, asking “May I help you?”

Not exactly the typical familial greeting one might expect.

I mentioned names of individuals, none of which changed the status of the host’s furrowed brow, so we immediately expressed our “Thank You’s” and “I’m sorry’s” and scurried back to our car to verify the correct address which we quickly found around the corner.

The rest of our stay went by all too quickly and was focused on spending time with people instead of visiting our favorite restaurants.  I kick myself, now, every time I remember how I used to whine about the Twin Cities seeming “too small,” or lacking variety in certain types of restaurants.  And now that I live in Fargo, the Twin Cities seems like a foodie mecca.  One that will teach us patience, as I realize our visits to Meritage and Surabhi, which were once relatively commonplace, will be few and far between.

Wise Acre Eatery
On my first day back to the Twin Cities, I was both irritated and delighted to find myself caught in heavy traffic.  A friend and I had a lovely experience at Wise Acre Eatery and chatted over hot tea, earthy beet soup accented with bright flavors of orange and vinegar, crusty bread, and whipped bacon butter.

Back to Bangkok Thai Deli
Another evening, Jake and I brought home Bangkok Thai Deli (BTD) and shared the spicy food with his father, a fellow chili head and adventurous eater.  At BTD, we cheerfully placed our order and snacked on sweet sticky rice stuffed into sticks of bamboo, while we waited.

The sliced beef laab was delicious as always. 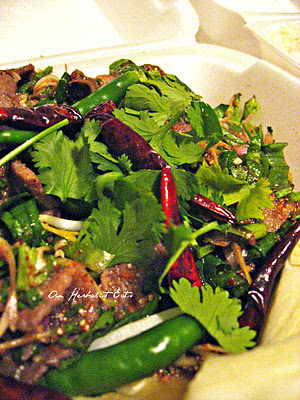 I ordered the Spicy Seafood Curry from the specials page, for the first time. 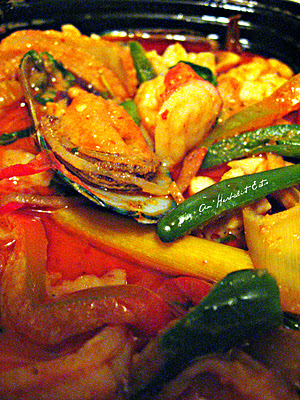 The curry was also pleasantly spicy and tasted similar to a Massaman variety I had tried to make at home once.  Our portion was stuffed with shrimp, mussels, tender calamari, fish cake, chunks of fake crab, hot  peppers, and scallions.

I especially loved the tender calamari and, though the fake crab was edible, I dislike its texture once cooked, as it is rendered soft and doughy.

Back to the Present & Jeni’s Bad Choice
Although we saw many people, our trip back home gave us an opportunity to rest and I promptly got sick the day after Thanksgiving.

Recovering from a cold and starting a new job has kept me busy.  Now that I’m feeling more like myself again, I am excited to catch up on my blogging and writing.  On a sad note, my laptop has stopped charging and I can barely conceal my annoyance that I now live in a state completely devoid of a Genius Bar (Jake would like to add Chipotle and local HD channels on DIRECTV to this list).  My apologies to the frightened-looking man at Best Buy who overheard the tail-end of my exasperated “What do you mean there is no Genius Bar or Apple Store in North Dakota?!?” rant.

All of which has led me to my Friday lunch break during which I ordered a sandwich from a hospital cafeteria steam table that would have frightened Beelzebub and his legions of demons.

Though the bread was perfectly toasted, it had been slathered with so much cheap shortening that it tasted bitter.  Two slices of not-so-melted American cheese stuck to each slice of bread and hugged a cold, gloppy mixture of tuna fish salad.

And so I sat in the corner of the lounge and made a valiant effort to eat my stinky, varying in temperature, tuna melt sandwich.

I most certainly did not see anyone else eating this sandwich.