I’m not one who craves coffee enough to make it myself, but when it’s waiting outside my door in the morning, I can’t help but to indulge.  After my cup of blond coffee, I ate half a broiled grapefruit and french toast drizzled with real maple syrup, sauteed plums, fresh kiwi, and crispy bacon. 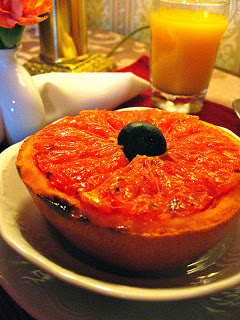 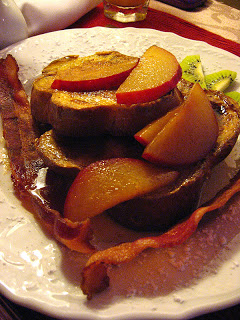 My family decided to accompany my brother to Tahoe so he could snowboard.  The thought of spending the whole day in a car was more than I could stomach physically and mentally (plus I am prone to getting motion sickness as a passenger).  So my folks and brother made the nearly three hour drive to Tahoe while I explored the city.
After breakfast, I headed to Davis, a 20-minutes drive from Sacramento, to stroll through the city’s year-round, outdoor farmers market.  Davis was heaven and I beamed as I walked through cozy neighborhoods and shuffled through crunchy leaves.

I wandered through the many vendors and marveled at the fresh, local, and organic produce.  Vibrant fruits such as pomegranates and persimmons, considered exotic by Midwestern norms, were commonplace. 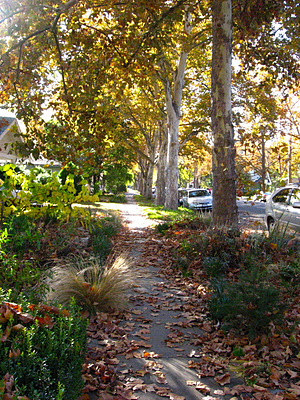 At the end of market were vendors serving a variety of hot foods.  I bought a jalapeno and cheese tamale and horchata from Montoya Tamales. 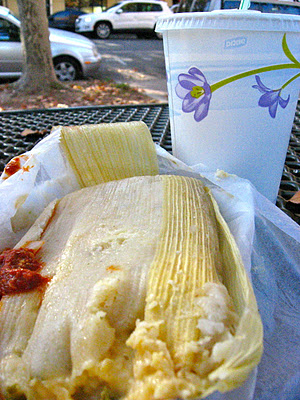 I added a spicy, red salsa to the tamale and settled on a park bench.  The tamale was light and fluffy and streamed with melted cheese and spicy chili.  I used to think I hated tamales because the only versions I had eaten in the Midwest were leaden and dry.  Traveling through central Mexico redefined tamales and this version was every bit as delicate and spicy.

After spending time at the market, I visited Oto’s Marketplace, a Japanese grocery store in Sacramento.  Many sources online sang Oto’s praises, mentioned their deli and sushi offerings, and spoke of Japanese individuals who considered the market worth a long drive.

I parked in the tight parking lot, reminiscent of Trader Joe’s parking lots of death, and wandered the store’s aisles admiring their large selections of sauces, noodles, and tea.  Full and limited to a small carry-on, I was tempted by giant slices of baum cake, poke and sake.

At the deli, I ordered eel and tuna nigiri which was freshly made by Ray Yamamoto. 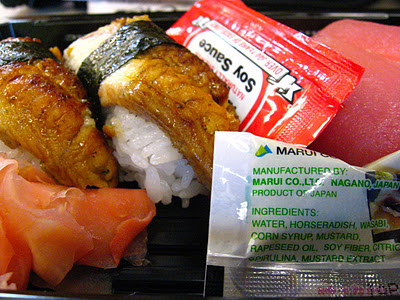 I’m not a sushi expert, but compared to every version I have ever consumed, this was the best. 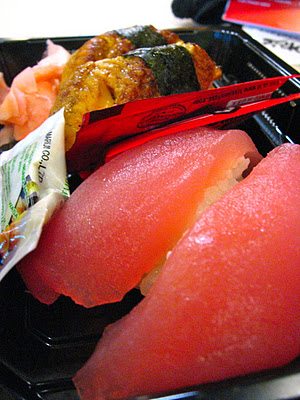 The rice was delicately shaped and room temperature.  The tuna was plush and naughtily silky.  The eel was caramel-colored and melted in my mouth.  The lack of a sticky, sweet eel sauce let the eel’s rich savoriness shine.
Prelude to Dinner
Full, I returned to The Amber House and took a long walk through the adjacent neighborhoods and to the downtown area.  After I collapsed into a firm nap, the phone rang and thus began the dinner negotiations.
The folks were exhausted from the long drive and anticipated a 3:30 a.m. wake up call to catch their flight home, so they asked me to choose a restaurant near Rocklin.  I’m not sure if they were really ready to accept my choice of a restaurant for dinner.  The non-chain restaurants were limited to international options and my father balked at my first suggestions.  When I defeatedly threw out “The Cheesecake Factory,” my dad insisted we go.  I burst into laughter when I heard my brother let out an exasperated uggggh. . . nooooo. . . Somehow, someway, my brother and Joan took over and convinced my Dad to meet me at Antolian’s Table, a Turkish restaurant in Rocklin.
Jeni’s Vacation Rule #2: Avoid eating at chain restaurant unless it’s a local chain.
Anatolian Table
6815 Lonetree Blvd
Rocklin, CA 95765
Having never eaten Turkish food, I excitedly flipped through Anatolian Table’s extensive menu.  I started my meal with piping hot tea served in a little glass cup and we were brought to complimentary hummus and bread because our order took longer than expected to arrive.  While the bread did not seem to be of a special Turkish variety, it was freshly baked and straight from the oven. 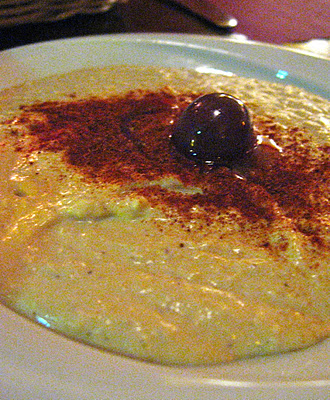 The hummus was really fantastic and buttery smooth.
Joan and I ordered our waiter’s suggestion of Yogurtlu Betyi Kebap, which he recommended as one of the restaurants spiciest entrees.  The entree came with a fresh salad made of shredded, non-ice burg lettuce, cucumber, shaved onions, and tangy red cabbage.  I stirred the vegetables together and the salad perfectly complimented our rich entrees. 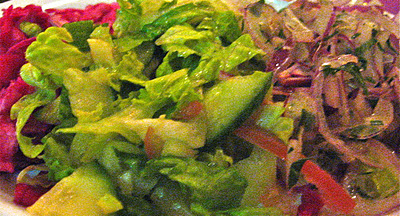 The Yogurtlu Betyi Kebap consisted of a kabob of slightly spicy, moist ground lamb wrapped in flat bread.  The kabob sat in a cool yogurt sauce and was topped with a mild tomato sauce that may have included creamy eggplant.  Online, there was some mention that the owner makes his own yogurt and if this is accurate, I wouldn’t be surprised as it tasted quite special. 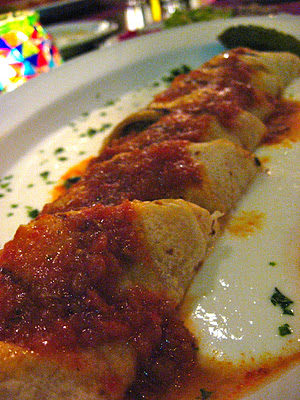 Even the two more hesitant eaters reluctantly agreed that it was delicious even though they had to be cajoled into taking bites.

My brother ordered the Tavulku Pide, described as “chunks of tender chicken meat mixed with spices on crusted dough.” 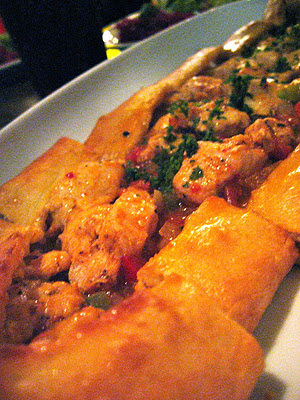 While the chicken was indeed tender, the meat’s sauce and seasoning struck my brother and I as a little bland.
Overall, we enjoyed our meal, belly dancer and all.  The food took longer than expected to arrive at our table, but we appreciated the complimentary bread and hummus and I especially enjoyed my lamb dish.  Anatolian Table is a worthwhile restaurant to visit and a unique option amongst an ocean of chains and insanely expensive, frou frou options.
My Last Breakfast 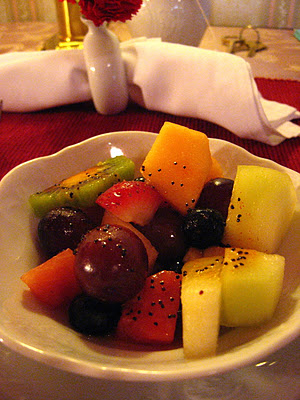 Fresh fruit salad dressed with a sweet, tangy, and spicy dressing similar to the chili-lime flavoring in Mexico.

Below is a crustless vegetable quiche made with roasted red peppers, spinach, and salty feta cheese accompanied by more crispy, seasoned potatoes. 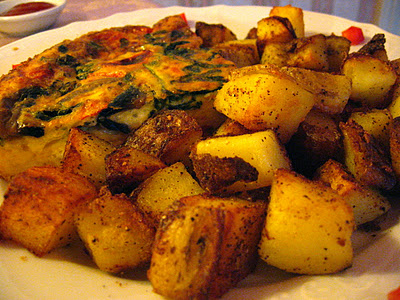 A wonderful sendoff back to the frozen tundra.