Poached Pear and Scrambled Eggs for Breakfast
I awoke in the morning to find the local newspaper and a tray loaded with hot coffee and fresh cream outside my door.  Guests can choose the time and location of their breakfast, and I chose to eat in my room.  Usually, I welcome the experience of sharing breakfast with strangers, but the option of eating in my PJ’s, bleary eyed and unbathed was too tempting.  Plus, I was groggy from being awakened early in the morning due to an obnoxiously loud, crash-banging guest downstairs (this did not occur again).

Carol, the housekeeper, was a joy my entire stay.  She brought me orange juice and a shallow bowl cradling half a poached pear in a warm sauce garnished with plump raisins.  The sauce was nicely balanced.  Not overly sweet and warmly spiced. 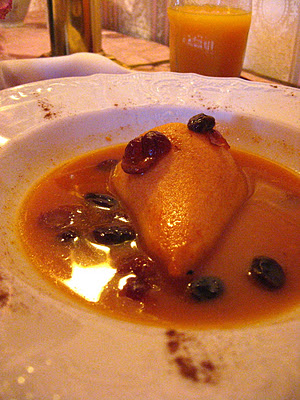 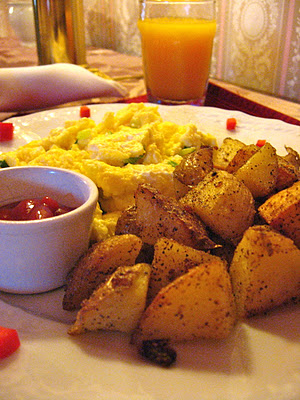 Eventually, I headed to Rocklin, a quit suburb located 30 minutes from Sacramento.  With white knuckles, I navigated my rental car down a six-lane freeway and experienced traffic culture shock as the slowest person seemed to be moving at least 10 miles over the speed limit.  A simple lane change required gunning the engine, lest remain stuck for miles.  My brother reminisced about driving through L.A. where cars traveled 20 miles over the speed limit.  Most people in the Twin Cities seem to drive about five miles over the speed limit, while in Fargo, it’s five below (which is probably why I received my first speeding ticket).

The city of Rocklin was beautiful.  We took the landlord’s charming dog for a walk along the railroad tracks, passing small farms and a greenhouse.  I giggled as herds of cows turned around and pensively stared as we passed by.  The dog enjoyed a game of fetch as she lept in and out of a small spring-fed pond.

Toxic Bridge
Before lunch, Kevin led us to Foresthill Bridge in Loomis, CA.  The Foresthill Bridge, the highest bridge in California, crosses the American River.  Suspended over a rugged valley, the bridge is both beautiful and tragic, as many have utilized it to commit suicide.

Although the bridge has walking paths on both sides, a “seismic retrofit” construction project began in January 201l, restricting half of the sidewalk.  The construction process involves earthquake proofing, repainting, and installing higher guardrails.  As we were about to cross the bridge by foot, I stopped to read these glaring signs. 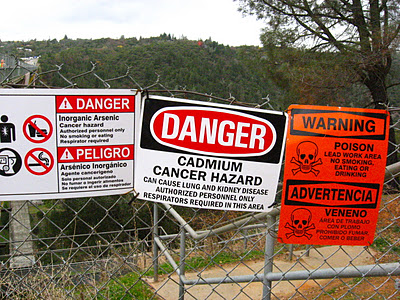 Lead?  Cadmium?  Arsenic?  No thanks.  You had me at the orange “Poison” sign with the skull and crossbones.  Joan and I recoiled and immediately walked back to the car, while the men kept walking.

For lunch, my brother took us to a homey Mexican restaurant in Rocklin.  While we waited for our meals, we snacked on complimentary chips and salsa.  The chips were freshly fried and the salsa was vibrant, thick, and slightly spicy.  Could the salsa have been thickened with masa?  I was disappointed the restaurant did not serve horchata so I settled for a strawberry Jarrito instead. 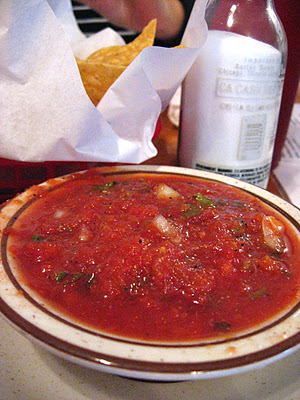 As an entree, I ordered a Taco al Pastor. 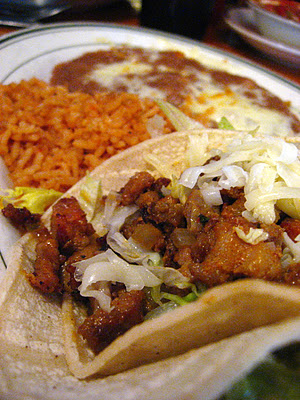 My plate included a large taco made with double corn tortillas and filled with marinated al Pastor meat. The best tasting part of my plate was the al Pastor meat which was crispy and moist and compellingly flavored, striking a balance between tangy, sweet, savory and salty.  One bite was a little too crispy and, for a moment, I feared it dismantled my crown.

Since my trip to Mexico, I have become a taco minimalist and prefer them simply garnished with onion, cilantro, lime, and a spicy salsa.  I was not so crazy about the addition of shredded cheese, sour cream, ice burg lettuce, and melted cheese, however my family was thrilled with their meals.  The food was obviously made with care.

I also snuck a bite of a chicken enchilada and some carnitas meat which was moist and flavorful. 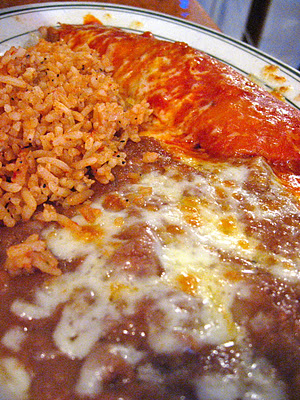 Cookies for Dinner
In the later afternoon, we wandered through Old Sacramento and munched on free candy samples.  My family decided to see a movie, so I gracefully bowed out, retreated to my Amber House sanctuary, and planned to meet up with them for dinner.
Jeni’s Vacation Rule #1: Never see a movie while on vacation, unless the trip is at least a week long.
Unfortunately, the movie ran longer than expected and by the time it was over, no one wanted to dine out.  My folks had already grabbed a microwavable frozen pizza and I was too sleepy to drive.
Sacramento may be no L.A. in terms of food diversity and offerings, but compared to Fargo, let alone the Twin Cities, it’s a foodie paradise.  The thought of all of the food possibilities drove me into a dizzy tailspin.
I ate cookies for dinner, vowing to eat the hell out of the next day, hell or high water.
And so I did.