Sacramento Day One: The Worst Airport Hot Dog, The Amber House & a Walking-Distance Bento (Plus a Couple Bonus Rants).

The game of airplane seatmate roulette makes me nervous.

Regarding flying, I’m not so preoccupied with fears of mechanical failures but sweat at the thought of a mystery seatmate.
I grew up as the daughter of an airline employee and spent a lot of my childhood in the air.  And throughout my quarter-lifetime, my seatmates have ranged from drunk, professional athletes, to the horrifically malodorous and over-perfumed, to the overtly hostile, to the sobbing.
During past flights, I have had my aisle seat stolen multiple times (in my less assertive days) and seen two rows of individuals beg the flight attendant to move their seats away from a particularly angry, loud man.  My flight history has been mostly free from oversharing individuals who insist on conversing the entire flight, though, the man behind me was not so lucky.

Fortunately, my seatmates to and from Sacramento were completely lovely.

Earlier this year, my brother surprised us all by moving to Northern California and this was our first visit to his new home.  Early Wednesday morning at four a.m., I awoke to make a three and a half hour drive to the Minneapolis St. Paul airport where I flew to Phoenix and connected to Sacramento.

Jeni’s Ranty Rant on Airlines
Let me point out that the costs of plane tickets have not decreased over the years, yet the Minneapolis-St. Paul Airport wanted to charge me to access wireless Internet in the terminal for 10 minutes (free wifi is available at the Phoenix and Sacramento airports).  Many of the major airlines like US Airways charge $25 to check a single bag.  US Airways also wanted to charge me $13 to access the Internet on a two hour flight and $6 for a non-existent snack pack they understocked on the flight.  How do you under-stock snack packs?
Worst Airport Hot Dog Ever
During my short layover in Phoenix, I bought a desperation hot dog from Jody Moroni’s Sausage Kingdom.

For $8, I bought what turned out to be a foot long hot dog and fries. 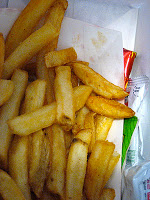 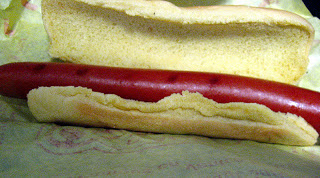 The employees placed the hot dog on the grill and frozen fries from a bag into the fryer.  Somehow, this tube of meat defied physics by literally sitting on the grill for 10 minutes and hardly charring.  See the phantom grill marks in the photo above.  The hot dog didn’t taste inedible, but its texture was mushy and I gave up after eating half.

The fries were actually quite good and nicely seasoned with a tasty seasoning salt.  I felt unsettled after eating the hot dog, so I only ate a few fries and snapped these horrible photos before boarding my flight to Sacramento.

My First Evening
I stayed at The Amber House Bed and Breakfast Inn tucked into the Midtown neighborhood, a short distance from the downtown area.

Of all my stays at bed and breakfasts, The Amber House ranks in my top two experiences, alongside The Elephant Walk in Stillwater, MN.  The Amber House truly became my home away from home, if even for a few days.

I was given a discounted rate for booking last minute and enjoyed my cozy, pink room simply adorned with a couple of chairs, cabinet, small desk, queen sized bed, and bathroom including a large claw foot tub and shower.  The room was also equipped with Direct TV, wireless Internet, and included an off-street parking spot.

Every evening, the staff delivered a tray with my choice of hot beverage and freshly baked cookies.  I looked forward to this nightly snack. 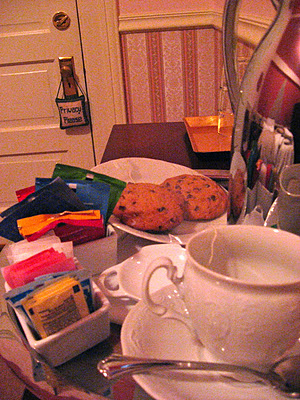 Once I settled into my new room, I walked to a nearby Japanese restaurant.  A female staff told me she felt comfortable walking at all hours of the night and she was right.  The sidewalks quietly bustled with families, couples, individuals, and dogwalkers.  Restaurants and bars buzzed with friendly laughter.  I was completely happy to be walking around in a friendly neighborhood dotted with bars and restaurants with only a sweatshirt while it was about 12 degrees in North Dakota.

As I transition to life in Fargo, I am perplexed by the wacky zoning.  Fargo-Moorhead lacks cozy neighborhoods with and without friendly bars, coffee shops and restaurants.  For example, a public library is perched in a strip mall, between a liquor store and pharmacy and I have even seen a plastic surgeon’s office next to an ice cream shop (and down the strip mall from a liquor store).

I also miss seeing people walking around outside.  Fargo seems to hate pedestrians and crossing streets, even with walk signals, has proven to be a harrowing, hair-raising experience, as I have almost gotten hit several times.  Some people walk around outside, but this activity seems mostly restricted to the downtown vicinity and university campus. 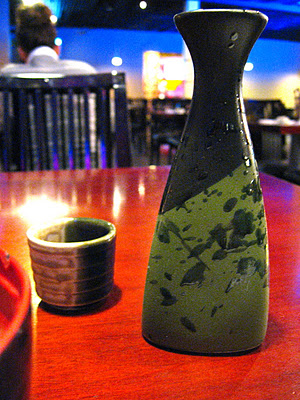 For dinner, I ordered a $16 bento box combination and chose sashimi, tempura, and grilled mackerel among other options.  To begin, I sipped a cup of comforting miso soup which arrived authentically, sans spoon. 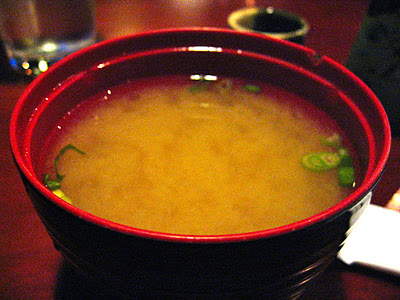 Shortly after, I received my bento box.  Let’s break it down, beginning with the salad. 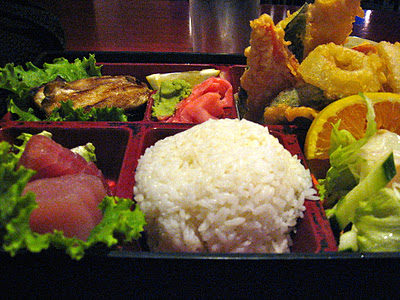 The ice burg lettuce was cold and crisp, garnished with cucumber and orange slices and covered in a creamy, sweet dressing. 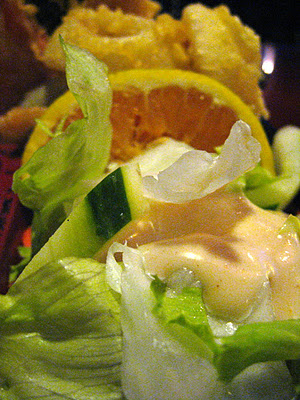 Though the dressing wasn’t the standard ginger dressing, it was scandalously addictive and I found myself dipping everything in the excess dressing.

The five slices of sashimi tasted fresh, though I am unsure what kind of fish they were though my best guess is tuna.  I was too hungry and tired to investigate, and by investigate, I mean ask one question.  The redder pieces of fish included tough connective tissue that was difficult to chew. 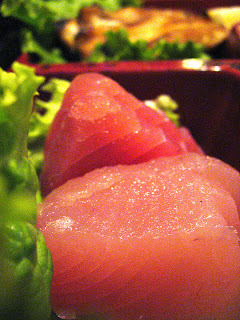 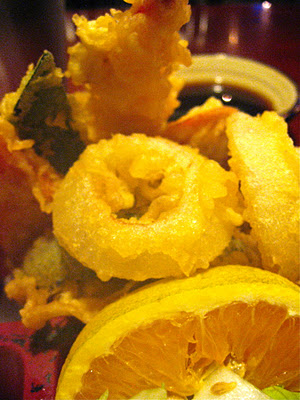 All of the vegetables and shrimp were fresh but the batter was slightly heavy and greasy enough that I only wanted to eat a few small pieces.  The tempura dipping sauce was light and lovely. 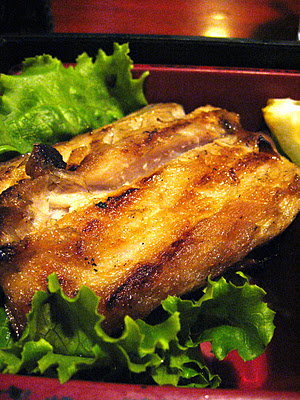 This piece of fish was more than heavenly.

The fish’s skin was as light and crisp as a sheet of crepe paper and the both the skin and flesh tasted fresh, lacking the strong, oily flavor typical to mackerel.

I savored the crispy fish spritzed with the accompanying lemon wedge.

Deep, Closing Thoughts
Pleasant service, affordable prices, and decent food.  Not perfect but decent enough and a short walk away from The Amber House.  The sake was cheap and the mackerel and salad dressing were really outstanding.

After paying my tally, I walked back to my pink room and promptly crashed, thus ending my long day.