There’s a first time for everything.

One of the most intriguing things about moving to a different state is learning about it’s traditions and cuisines. I grew up in Minneapolis-St. Paul where we ate tater tot hot dish in the school cafeteria, rolled up lefse for holiday meals and played winter sports like hockey and broom ball in gym class.

Not that winter sports and Scandinavian cuisine don’t thrive in other states, but for my husband and I, they were very normal aspects of life that never made us think twice when we encountered them.

The Breaded Pork Tenderloin Sandwich
This is a food I had truly never seen until I attended college in Iowa. I tried one at the school cafeteria and found it puzzling. The pork was as large as my face, flat as a pancake, and terribly dry. This particular tenderloin didn’t thrill me, so I didn’t pursue another one until our recent move to Iowa.

The blog Des Loines opened my eyes to the world of Iowan breaded pork tenderloin sandwiches. I learned that some are coated in crumbs and others are battered. Some may be pounded paper thin while others are thicker and they should all be neatly trimmed, tender, and juicy. These sandwiches are typically garnished with pickles and mustard.

Jake and I recently tried our first ones at Butcher’s Steakhouse in Mason City, IA. 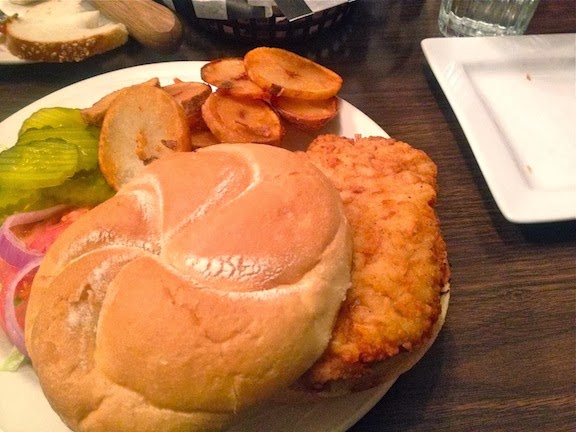 The tenderloin remained juicy inside its freshly battered crust and came with a big pile of dill pickles. We look forward to further exploring the big world of Iowan breaded pork tenderloin sandwiches.

Loose Meat Sandwiches
This is another food I haven’t seen outside of Iowa.

For those who are unfamiliar with this type of sandwich, they are composed of a steamed white hamburger bun filled with finely ground beef that may or not be seasoned and typically dressed with cheese, pickles, mustard.

My local blogging friend Sara pointed me towards Pro’s Sandwich Shop for a Mason City version. 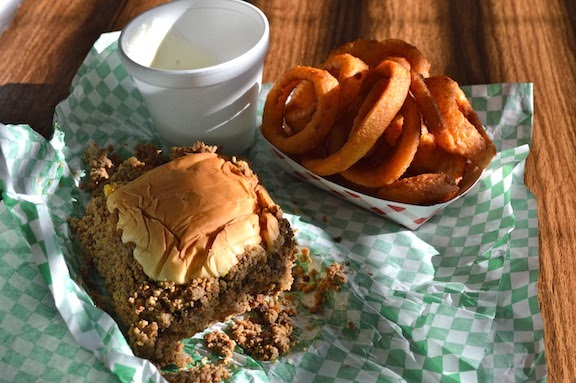 Pro’s calls it a Beef Delight and they are popular here. I sat at the long lunch counter and watched the employee scoop the meat from a shiny metal bin. When she asked what I wanted on the sandwich, I requested whatever was typical so she added cheese, lots of dill pickle chips, yellow mustard and chopped onion before wrapping it it up tightly in wax paper.

I added an order of onion rings which came with a large cup of ranch. 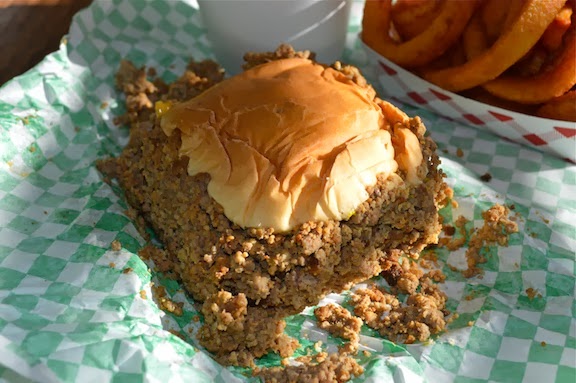 It seems that onion rings here are always served with ranch and I can not complain.

I unwrapped my lunch at home and the beef overflowed from the sandwich. It tasted flavorful in itself, though I added a touch of salt. By the end of the meal, I was amused to find I had eaten the sandwich with a spork packed in the take-out bag. Jake enjoyed the other half of the meal and we will be craving these again, soon.

There are lots of recipes if you want to make them at home. One of my newest North Iowa blogger friends just shared her recipe for Maid Rites.

Sipping Iowa Wines
Iowa is just like Minnesota and North Dakota in that the state produces many types of wine. I bought my first bottle of Iowan wine from Market 124, a shop featuring Iowa-made products in Downtown Mason City.

The store’s spacious and features everything from locally-made candles to cupcakes and there are Iowan wines sprinkled everywhere throughout the store.

Hunting For Fossils
I’ve written about it before, but I was surprised to find a fossil park in my backyard.

The Fossil and Prairie Park is located in Rockford, IA, about a half an hour away from Mason City. From what I’ve read, it’s one of a few fossil parks in the nation that actually allows visitors to take home their findings. And for no fee. 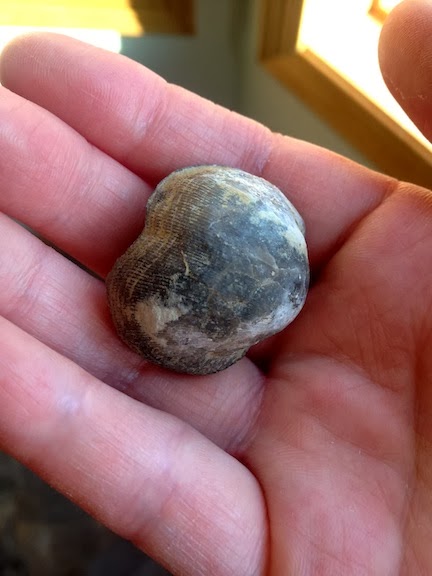 The county probably allows visitors to take home the fossils because it’s impossible they’d ever run out. There are literally fossils under every foot step. You’re climbing hills of fossils. 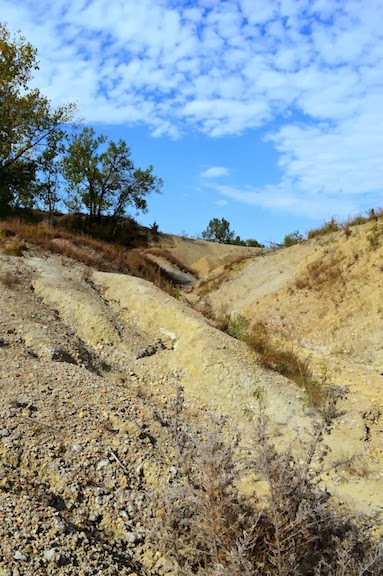 The park doesn’t encourage visitors to dig, which is no issue because you can grab fossils by the handful. This was one of my most unique Iowa firsts.

I remember learning about Wright in an elementary school art class. Of course, we discussed the home Fallingwater precariously perched on a waterfall in Mill Run, Pennsylvania. I was very enamoured with the building as a child and it even gave me a nightmare.

The fact that Frank Lloyd Wright architecture is a common sight in Mason City is very unique. When he lived in North Iowa during the early 1900’s, he built the Historic Park Inn Hotel which is last of his hotels to remain, as well as the Stockman House and City National Bank. His students designed other homes in the city that reflect Wright’s style.

The Park Inn Hotel is also unique because it’s so accessible to visitors. Although I’ve never officially toured the hotel, I’ve wandered around several times and know they welcome curious visitors. In the evenings you can enjoy drinks and appetizers in the lounge downstairs or dine in 1910 Grille on the main level.

Now, I see Frank Lloyd Wright everywhere. Many of the local business also echo some of his distinguishable flourishes in their interior design.

I’ve been to a lot of fairs and festivals but this one was incredible. 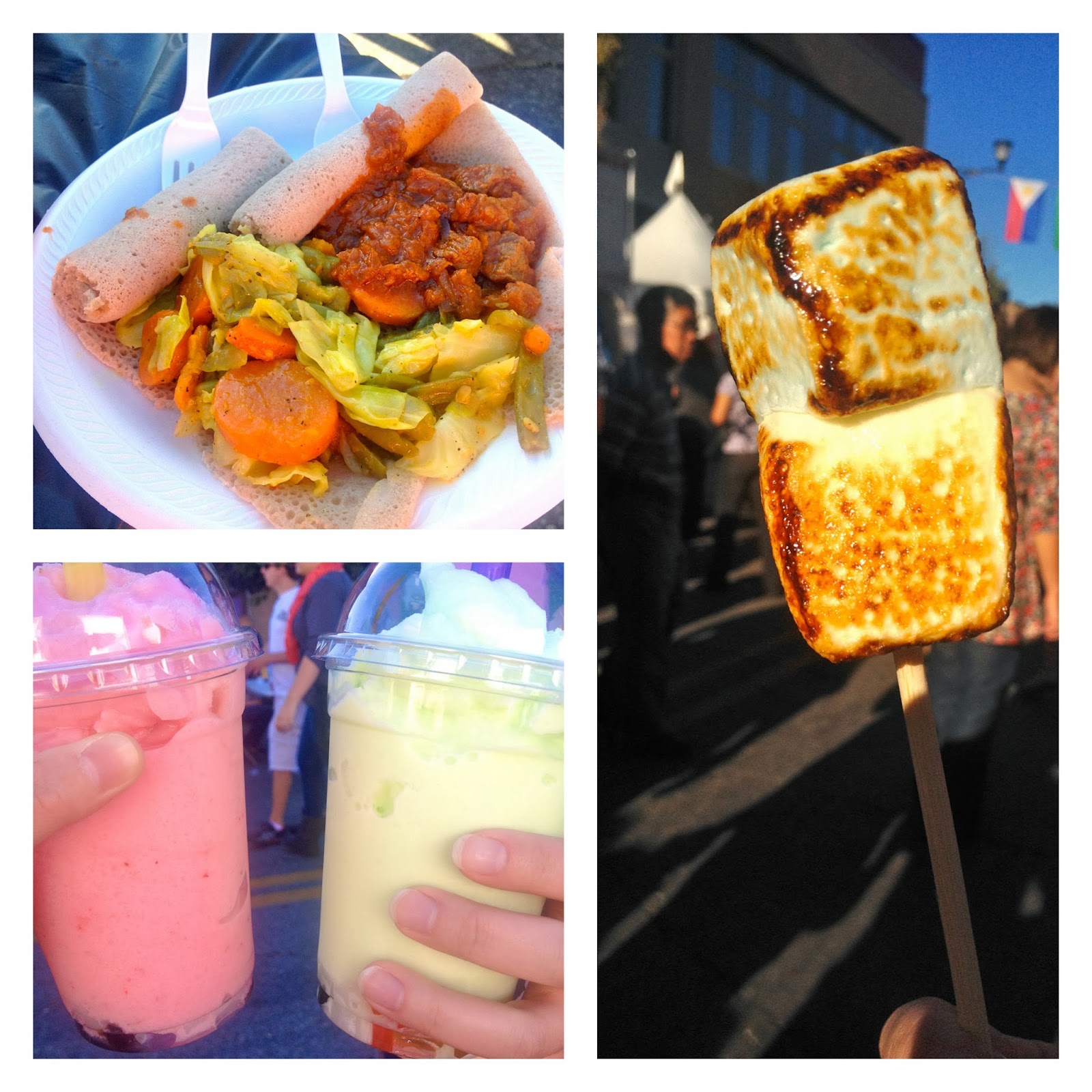 The festival was completely accessible and sprawled through the city just like its farmers market with live music playing in the background.

I’ve never seen so many different nationalities of food in one space. There were many Iowan food producers represented and each stand offered $1 samples of a specific dish.

My friends and I enjoyed everything from Thai laab to bubble tea to Ethiopian food. We’ll definitely return.

Meeting Iowa Bloggers
Last but not least, I’ve had the pleasure of connecting with many Iowa bloggers during our first half year here. There are many Iowan blogging networks such as Straight from the Corn State: Iowa Bloggers that’s featuring this post.

Last fall, I connected with bloggers from across the state in Iowa City and even found a lovely group of bloggers in my own Mason City-Clear Lake neighborhood. Stop by and say hello to them sometime.

I look forward to experiencing more Iowa firsts and returning for plenty of seconds. Do you have any suggestions for favorite Iowan foods or experiences for a new resident?