A Post-Thanksgiving Apple Pie To Eat With Cheddar: A Recipe

For Thanksgiving, Jake and I visited our families in the Twin Cities where our parents spoiled us with lovely meals. My mother-in-law prepared her famous holiday morning egg bake and cinnamon rolls in a bundt pan, while my folks served turkey dinner with sweet potato casserole and my late mother’s favorite artichoke dip recipe.

A downside to spending Thanksgiving out of town is not having a fridge full of turkey dinner leftovers. When we returned home, I wanted apple pie and so I made an apple pie.

Last year, culinary school ruined me for homemade pie crusts. There’s nothing inherently wrong with pre-made pie crust in the refrigerated section. I have used them for convenience’s sake and even found whole wheat versions at the Wedge Co-op that actually taste like butter, though you will pay for these. But the problem is that pre-made crusts often taste like rancid shortening, even when they are used well within their sell-by date.

This time, I just wanted a scratch-made pie or bust.

Last year in culinary school, I found myself in baking lab around the holidays. We cranked out so many pies that there wasn’t any time to be intimidated by making homemade pie crust. We were a pie-crust making machine.

My teacher taught us how to make pie crusts around the big, wooden baking table and we worked in tandem. I loved how she handled pastry dough with an air of unfussiness, yet they always turned out perfectly. Scone dough got beat in a large mixer with room temperature butter and I was instructed to cut the shortening into the flour with my fingers. This experience taught me that, although there is a method to the madness, pie crust can take more abuse than one might expect.

I adapted this recipe from my Williams-Sonoma Essentials of Baking cookbook which is very similar to the recipe we used in class. Even though I have a stand mixer, I like to make the dough by hand.

If you have extra pie dough, roll it out, cover it with the eggwash, sprinkle with cinnamon and sugar, and bake. It will be too tough to use as a pie crust, but perfect for a treat. 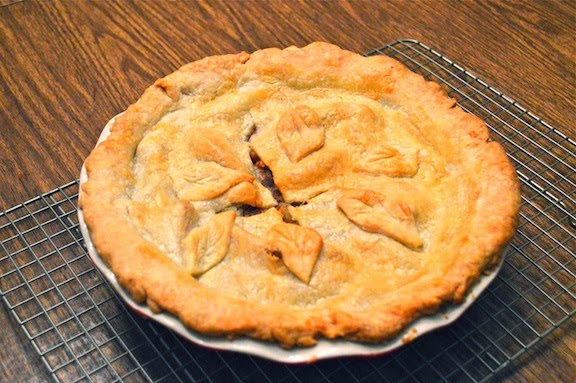 My First Apple Pie
Adapted from Williams-Sonoma Essentials of Baking

6 tablespoons shortening (I used vegetable, but I think you could substitute lard)

2/3 cup cold butter cut into small cubes (I always use salted butter since I desire a note of saltiness to my sweets. However, if all you have is salted butter, you could add less than 1/2 teaspoon of salt)
8-10+ tablespoons ice water

Instructions:
In a large bowl, combine the flour, sugar and salt.

Drop the tablespoons of lard into the bowl. Sprinkle over the cold cubes of butter.

When you see the fat and flour form pea-sized crumbles, drizzle in the ice water. Although the recipe called for eight tablespoons of water, I added at least two-three extra.

My best advice is to start with eight tablespoons and mix the dough with a fork. If the dough is too crumbly, add an extra tablespoon at a time until you can form the dough into a ball.

As my culinary instructor mentioned, people frequently get thrown off making pie dough because they use too little water.

Divide the dough into two balls, making one a little bigger than the second. Form into discs, wrap in plastic wrap and chill until they are firm.

Roll out the pie crusts out on a floured surface. Gently drape them around the rolling pin to transfer to the pie plate, using the bigger one for the bottom crust and the smaller for the top.

Pie Filling Ingredients:
I like to build tall pies so I toss in extra apples. This amount doesn’t have to be exact.

8 granny smith apples (organic if you can find them and if they’re not too expensive)
1/4 cup brown sugar, packed
1 tablespoons lemon juice (I just juiced a whole lemon since I don’t mind extra tartness)
1 3/4 teaspoons cinnamon
1/8 teaspoon nutmeg
Pinch of salt
2 tablespoons of butter cut into small cubes
1 egg
2 tablespoons of heavy cream

Peel apples. To prevent browning, plop the peeled apples in a bowl of cold water with the lemon halves  left over after you juiced them.

Core the apples and slice them. Combine with the brown sugar, lemon juice, cinnamon, nutmeg and salt. You can either add the melted butter in now, or cube the butter and dot the apple mixture before you cover with a pie crust.

Pour into the pan lined with the rolled out pie crust and leave the excess liquid behind.

Top with the second pie crust.

Pinch the top and bottom crusts together and remove the excess dough from the edges. Tuck them in around the edge of the pie plate so you have a neat edge and seal. Crimp (as you can see, I forgot).

Feel free to cut out shapes from the extra pie dough you removed from the edges.

Mix the egg with heavy cream and brush the top of the pie. You can also just use heavy cream with no egg. If you don’t have a pastry brush, dab with a paper towel. Place any decorative pie shapes on the dough and brush them with the glaze.

Cut a couple of steam slits into the top of the pie.

Reduce heat to 350 and bake for about 40 minutes or until the apples are tender. Test them by poking a knife into the steam vents. If the top seems to be browning too quickly or you don’t want it to brown further, cover with foil.

I like to enjoy each slice of apple pie with thin slices of melted sharp cheddar melted on the top. Jake prefers ice cream or whip cream.

Since I am new to pie-making, feel free to leave suggestions or tips.