My Dog Won’t Wear Boots: A Really Silly Give Away

This might be one of the silliest give-aways you’ll see.

My dog needs a long walk everyday, but he hates wearing boots.

When the first snow hit North Iowa, it turned to slush. I ran to the nearest pet store and bought my dog cushy boots. Neither the small or medium size fit him and he kept kicking them off not matter how tightly I wound the Velcro straps, so I returned them.

I conducted some Internet research and ordered a product called Pawz which are thin, waterproof rubber boots that are meant to slide onto a dog’s feet without clips or Velcro. They’re also disposable (though you can utilize them multiple times), biodegradable, and endorsed by Cesar Millan. 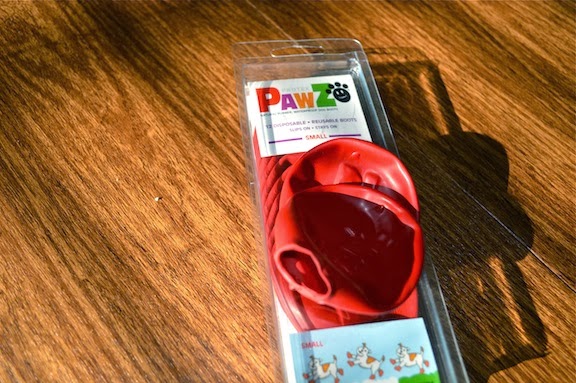 Supposedly, dogs have an easier time wearing Pawz because they aren’t padded and allow them to feel the ground beneath their feet. They’re like little red balloons or feet condoms.

Yup. I still can’t get my dog to wear Pawz, despite all of their accolades.

Trayse the dog suffers through short winter walks after which he gingerly licks the snow from between his paws. If only he’d understand why he needs to wear Pawz. Silly dogs. They have no complex reasoning skills.

I spent $20 on three pairs of red Pawz and now I can’t use them. The first two boots ever so slightly worn, as they were the ones I chased him around the house with. I managed to put them on his back feet, but quickly removed them when started walking around on his front two paws and attacking his own feet.

In order not to waste $20, I would love to give the Pawz away to a reader with a small dog. The package says the size small will fit a dog with paws up to 2.5 inches long.

If you want to enter this ridiculous giveaway, leave me a comment at the bottom of this post or my Jeni Eats page on Facebook and include your best winter dog exercising or walking tip. Even if you don’t want to boots, feel free to leave a tip anyway. I will randomly pick a winner and mail the boots anywhere within the continental US free of charge.

What do you have to lose?