It’s hard to believe I graduated from high school ten years ago.

Our upcoming ten-year reunion feels like a reality check.

I often pair memories with food and high school is no exception. When I think of high school, I think of our school cafeteria. My parents sent my brother and I to a small, private school in Minneapolis. It was small and our cafeteria served one entree each day. Chimichanga day was my favorite because we received the most food, while beef stroganoff day wasn’t as popular.

In between class, we congregated around snacks. The cool thing to do was ask the cafeteria ladies for a squishy white bagel filled with a slice of white American cheese. The ladies microwaved the bagel for exactly 90-seconds and served it with a side of cream cheese upon request. I ate this creation nearly every day. It’s a good thing I played sports.

When I think of high school food, I also think of French class in which our teacher taught us how to make crepes and introduced us to Nutella. On one special occasion, we earned extra credit by dining together at Pierre’s Bistro in Minneapolis (which has since closed). I tried my first escargot and curiously eyed but did not taste our student teacher’s bowl of steamed mussels, a food I had only seen on television.

Before class, our teacher sold candies. We all saved our loose change to buy little bags of chewy Eiffel bon bons or Toblerone candy bars. 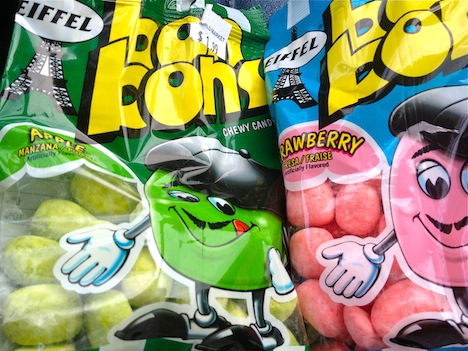 I hadn’t seen these Eiffel bon bons since French class. This is because they are distributed by the Foreign Candy Company which sells the candies in bulk to foreign language teachers for fundraising efforts.
Individuals may be able to buy them in bulk through the Foreign Candy Company and I’ve seen them sold by other online candy companies and Amazon. While it’s not impossible to find these candies, you can’t just pick them up at the drugstore. I was giddy when I found them at Cost Plus World Market.
I bought a couple bags of the green apple and strawberry flavors for $1.99 each from the World Market in Roseville, MN. Does anyone else remember a blue raspberry variety?
The bon bons are pricey, but sold in larger bags than the single serving packs I bought in class.
Not bad for a taste of nostalgia.


Some pandemic cooking: Teaching Jake how to set up

Some vegetarian sushi from Kado No Mise – soy simm