It Took A Year To Get To Maxwells

It took us a little over a year to get to Maxwells. WF Maxwells, to be exact.

The pricepoint being our main reason. The restaurant’s prices seem to hover a few dollars higher than its fine dining counterparts like The Hodo Restaurant, Mezzaluna, and even The Beefsteak Club (excluding the 28-day, dry-aged prime steaks). Those expecting a grand setting will be surprised to find Maxwells tucked in a humble strip mall in West Fargo.

Earlier this winter, we visited Maxwells’ Max Bar for dirty martinis and the Roasted Chicken and Basil Pesto Flatbread. Both tasted better than average so we saved our return for a special occasion.

We arrived at Maxwells after eight p.m. This Saturday evening the restaurant was extremely busy, but the staff had an opening at a small, empty table. Our original plan had been to arrive much earlier, but it was foiled by Jake’s car which wouldn’t start. Although AAA’s help arrived 20 minute later, they kept calling the wrong phone number. I guess I had accidentally entered the wrong area code when I registered Jake’s membership. The man who arrived was incredibly nice, all things considered. He also looked like Bradley Cooper, albeit a tad shorter and scruffier. 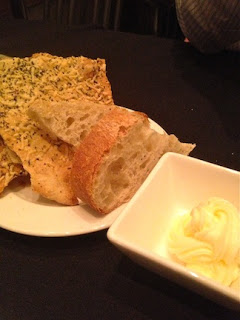 Our server brought us a bread basket with soft butter shortly before our appetizers arrived. I especially liked the salty flat bread coated in Parmesan cheese and cracked black pepper.

The roasted chicken flatbread was as good as our first visit. It’s one of those simple concepts done well. Fresh mozzarella, moist pulled chicken, salty olives, and tart balsamic vinegar. 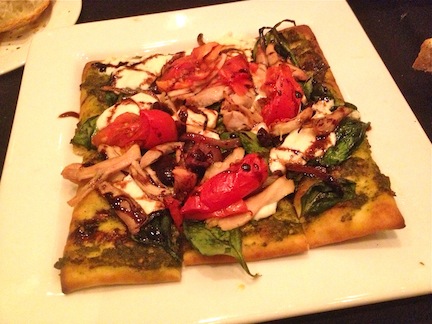 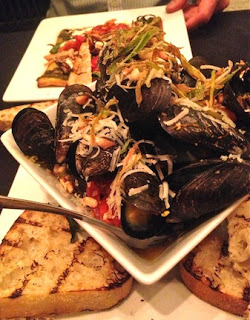 The portion of mussels was generous. However, they were the smallest I’ve seen and tasted slightly more briny than what I’m used to. A few mussels were closed and a good number were opened just a crack. I refused to eat these. Jake theorizes that if a mussel is only cracked but can be pried open without too much effort, it just means it put up a good fight. Neither of us has ever gotten sick, but I don’t subscribe to this theory. More mussels for Jake. The shredded Parmesan cheese combined with the shellfish wasn’t as frightening as I thought it would be. I found it unnecessary, but not terrible.

As highlights, I liked the garnishes of what I’m guessing were fried green bean strips and pine nuts. Pine nuts cost plenty, so I fished all of them from the bottom of the bowl. Maxwells also provided a generous amount of charred bread with which to absorb the flavorful broth. The broth was the best part of the appetizer and the closest I have found to Meritage’s, except that it did not contain smoked pancetta.

I liked my entree of Poached Salmon in Artichoke-Caper Cream Sauce ($29) better than Jake’s. The salmon was moist and the sauce was intense. It was thick and silky and tasted of mustard. I liked the Thai purple rice’s texture and the char on the sweet bell peppers. As a critique, I felt there were too many capers, given that the artichokes were also briny. 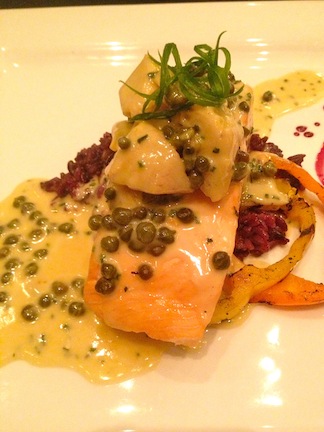 Jake’s entree of Pecan Encrusted Pork Tenderloin Medallions was served with “apple brandy caramel sauce, chili roasted sweet potato and golden raisin chutney” which made for a sweet combination. The pork medallions were small and sliced very thin. The breaded exterior was nicely crispy, but the pork was dry. 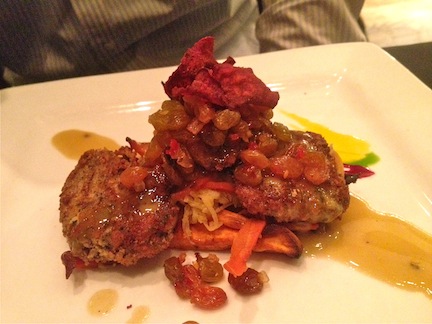 In Closing:
The service was warm and appropriately attentive. Atmosphere was cozy.

Maxwells puts a lot of attention and whimsy into the plating of their dishes. The menu items are creative and intricate, though I think some may be overwrought.

Blogger and pianist Jihye Chang provides her thoughts on Maxwells in a post written when she used to live in the Fargo-Moorhead area. Her documentation about local dining is spot-on and I have referred to it time and time again She feels their dishes can tend to lean towards the salty side. I have a relatively high tolerance for saltiness and found the seasoning on much of the food to take me to the brink of almost too salty. I’m fine teetering on this edge and enjoyed that many of the flavors struck me with more intensity than many other restaurants.
We ordered two of the least expensive entrees which cost $29 each. Because of the cost, we wouldn’t return for another full dinner unless it was designated as a special occasion. And we would certainly not order the pork again. However, we wouldn’t hesitate to return to the Max Bar for beverages and appetizers, especially during happy hour. Jake would be happy as a clam with just a beer and that roasted chicken pizza. Our friend specifically recommended the restaurant’s elk entree and bison meatballs in vermouth cream sauce served in the bar. Personally, I’ve been eyeing their Tuesday happy hour special of Beef Tips served with bourbon for $20.