On Friday morning, I drove to the Twin Cities to begin our wedding weekend.

My stomach churned with hunger an hour into the drive, so I stopped in Fergus Falls for an early lunch.

I was happy to stop in Fergus Falls even though I felt urgency to reach the cities.  Fergus Falls comforts me very much like a warm blanket.  The homes are well-kept and form cozy neighborhoods that are surrounded by mature trees.  The town was especially beautiful painted with fall colors.

Normally I’d stop at Cafe 116, but wanted to try something new.  I wasn’t so much in the mood for cafe food as I was for a blue plate special.

The Viking Cafe is like the antithesis of Cafe 116.  More like the old-fashioned neighborhood diner as seen in movies with wooden booths and pie.  Hence, the cafe’s name, it was lined with Viking-themed decorations.

I stood at the entrance for a few minutes trying to decipher the seating code.  Do I seat myself or wait to be seated?  The man at the cash register finally directed me to choose a seat.

I settled into a booth in the middle of the room and facing the door.  A server whizzed by and deposited a small glass of ice water and a menu.

After perusing the menu, I ordered coffee with cream and sugar, and a lunch special of fried fish, toast, tomato slices and potato salad.  She took my order and zoomed away as quickly as she had arrived.

The coffee was hot and arrived with my very own saucer of real cream.  I was thrilled.

My food arrived soon after. 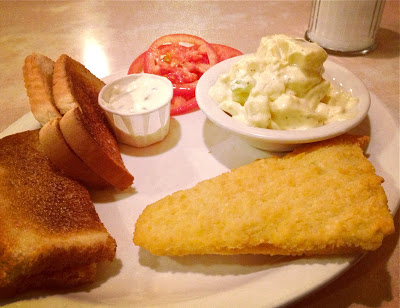 The fish appeared to be of the pre-frozen variety, but it was piping hot, crispy and not greasy in the least.

I liked the potato salad’s tanginess, but its temperature which was warmer than I expected.  It tasted fine so I’m guessing it might have been recently prepared.

The tomatoes were ripe and the toast tasted like butter-flavored oil.

I can not eat fish without lemon, a personal quirk, and looked around to ask for some slices or wedges.  The servers raced around, hardly stopping at a table for more than a few seconds.  No one stopped by to check in and my attempts to make eye contact failed.  I found a server who paused at the table behind me and asked for lemon.  She told me they only had lemon juice packets.

I took what I could get.

Several of them appeared sticky with syrup so I let those be.

Overall, the meal was warm and adequate.  I appreciated that I could get in and out in less than a half hour and my final bill was less than $9, including tax.

I realize the cafe was busy, but I was slightly distracted by the smushed muffin by my foot and sticky salt and pepper shakers.

All things considered, I would return to The Viking Cafe.  A little sticky, possibly semi-homemade, and efficient, the sum of its parts was endearing.