I love a good story almost as much as I love good food.

At the TECHmunch conference in Minneapolis, Andrew Zimmern highlighted the importance of pairing good food with compelling stories.  And not just any stories, but those no one’s ever heard before.  When I’m searching for inspiration, I often turn to Chowhound discussion boards.  In my favorite discussion of all time, individuals contribute memories of food haunts they tasted once and haven’t found since.  I am both soothed and exhilarated by reading others’ accounts of foods so ethereal, they remain unforgettable, yet tragically out of reach.  However, they’re all worthy of a lifetime of rediscovery.

I’m constantly inspired by those who participate in the Twin Cities’ vibrant Fortify, A Food Community.  North Dakota’s community of food writers and bloggers may not yet be a force with enough leverage to be invited to restaurant tasting events, but this quickly growing group is compelling in its own right.  Three of my favorite North Dakota food writers join me in sharing their own stories of food haunts in my first Q & A feature. 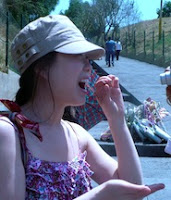 I’m often haunted by the food treasures I remember from my childhood and meals I enjoyed from afar.  Now that I live in North Dakota, I’m haunted by my favorite foods from the Twin Cities.  One day, when we leave North Dakota, I’ll be haunted by the foods I am presently taking for granted.I have a love-hate relationship with travel.  I crave exploration to no end, yet am simultaneously terrified by it.  Considering that I may have some manifestation of agoraphobia and become convinced I will face untimely death when I journey away from home, it’s impressive I even made it to China.  After a 12 hour flight, a two hour flight, an evening in a Guangzhou hostel, and an eight hour bus ride, my friend and I landed in Qinzhou.  Twice, my friend took me to a tiny shop where we slurped spicy bowls of noodle soup that cost about 30 US cents.  Rice noodles, fresh greens, pickled vegetables, and fried tofu pouches floated in an atomic red broth.  Although my friend asked the woman to only add a tiny splash of spicy liquid from her bubbling cauldron, my soup was still was so skalding I could only eat in tiny, painful bites.

More recently, I traveled to Puebla with a few friends.  We were spoiled by our proximity to restaurants specializing in Tacos Al Pastor.  This was the real deal.  For Pueblans, making Tacos Al Pastor does not equal throwing raw, marinated meat bits on a grill.  Instead, they roast towering cones of local pork.  These meat cones are then shaved into tacos ready to be topped with pineapple, doused in lime, sprinkled with salt, and drizzled with spicy salsas.  If I am lucky, my life will include opportunities to taste these treasures again, but more realistically, I’ll have to endure the haunting.

Beth, Rhubarb and Venison
For over a decade now, I have unsuccessfully been trying to replicate the tortilla española that I’d have as a snack in the university cafe during a semester abroad in Spain back in my college years.  Simply known as “tortilla” there, those slices of egg-and-potato omelets carried me through many a long Spanish grammar class.  Since then, I’ve whisked eggs until my arm is stiff; I’ve tried using baked potatoes, boiled potatoes; I’ve fried, broiled and baked; but try as I might, I still have not been able to replicate the lightness and overall deliciousness of those amazing (and amazingly affordable) morsels.  I think another trip to Spain is in order…
Beth Schatz Kaylor is a freelance writer whose work has been published in various regional and national media outlets including Midwest Living magazine.  She writes about rhubarb, venison, and other North Dakota kitchen adventures at rhubarbandvenison.blogspot.com.

Brianna, Don’t Eat Crap
My husband and I took a trip to Philadelphia for our one year dating anniversary. We had many popular food places on our agenda but little did I know my favorite food would be served at the Philadelphia  Eagles game. Chickie’s & Pete’s world famous Crabfries are amazing. I am a french fry addict so it wasn’t hard to fall in love with these unique fries. The hot and steamy french fries that are crisp on the outside and flaky on the inside makes me weak at the knees. When we were approaching the stadium we overheard a conversation between two gentleman where one man was telling the other he would have to try these fries. He continued with, “They were the best food in the stadium.” I knew instantly I had to have them.

Now Chickie’s & Pete’s Crabfries are unlike anything I’ve ever had. They are served in a round paper bucket with special seasoning. I’d describe it as almost seafood seasoning with a side of gooey white American cheese sauce to dip your fries in. If you are ever in Philadelphia you must try these fries. I secretly want to go back just to taste them again.
Check out Brianna’s blog www.donteatcrapblog.com and follow her on Twitter @donteatcrap.

MeLissa, Fargo-Moorhead Writer, Artist, and Studio Art Instructor
My haunt is a bit more physical. I seem to have misplaced the most romantic breakfast I’ve ever eaten.When the Cajun Daddies start brewing Sunday’s dinner on Friday, you realize in Louisiana, food is sex. Food is social. Food is life.
A decade ago, I was a food virgin. You know, I ate in equivalence to procreation (versus multiple orgasms).  Then, in 2003, I drank 30 or so pots of piss in a local pub in Australia, spun a globe, and moved to Louisiana. In the heart of Cajun country, slow moss drips down slower trees and the breeze never comes. And the men, they dance, they sing, they tell stories, and most importantly, they do the cookin.’There’s a reason that Eve Ensler herself refers to New Orleans as “North America’s Vagina.” The wide mouth of the surly Mississippi and sweltering swamp summers require industrial strength coffee to combat the lethargy. Though some do give in, sitting on porches, sipping mint and watching the gardens grow. My favorite way to enjoy this heat is the perfect patio brunch.
My first voyage to New Orleans was nothing but magic; it was like perfect Parisian rain, I was staying in a boutique hotel in the French Quarter, it was pre-Katrina, and everything was a feast for my young eyes. After a long night, we asked the gentleman tending the door where to get ‘breakfast.’ His directions were a smiling, “three blocks up this here road, and one blockovah” sort of something. I ordered my first flambéed tableside Bananas Foster. I fell in love with New Orleans. In no time, I was part of the greatest jazz legends, the most tender folks, and the most charismatic food. And countless nights I wandered the Quarter alongside southern belles and drawls; yet ne’er did I find that pink shutter door again.
You can find MeLissa’s art installation at the Moorhead Center Mall and writing in the High Plains Reader where she covers the local food scene, food system, and travel.