The other week, our friends invited us over for home-cooked Korean food and it was magnificent.

One afternoon, I weighed my options.

I could pout about the lack of Korean restaurants in Fargo-Moorhead, take a gamble with my money and palate by ordering galbi from a non-Korean restaurant, drive to the Twin Cities for lunch by myself, or learn how to make the food myself.

What’s a Korean that has never made galbi or japchae?  An adopted, Minnesotan Korean who has taken far to long to connect with her culinary roots in the kitchen.

Galbi is marinated and grilled spareribs, cut in a special manner (although our friend made a tasty version with a different type of meat), and chap chae is a flavorful stir fry made with vegetables, sometimes meat, and clear noodles.

I bought a few ingredients at The Lotus Blossom, including these dried shitake mushrooms. 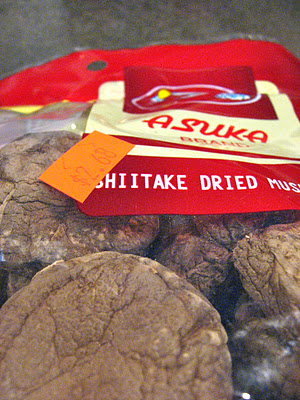 The owner of The Lotus Blossom is completely lovely and will go out of her way to help customers understand ingredients and create authentic, Asian dishes at home.  The Lotus Blossom’s selection is smaller than the Asian American Market and some of the prices higher, but is a wonderful place to shop because of the owner’s hospitality, personalized guidance and advice.

I found a large selection of Korean potato starch noodles at the Asian American Market and each package cost around $3. 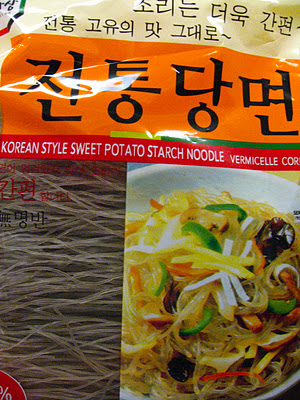 They are mild in flavor and remind me of rice noodles, except a little bit chewier.  I also bought a jar of Gochujang, a sweet, spicy, salty fermented red pepper paste.

Mirin is a sweet rice wine.  A must have for Asian cooking.  Many cheaper brands of mirin are made with corn syrup, such as this one.  Higher qualities of mirin don’t contain corn syrup and are much more pricey.

My friend mentioned she shopped at Every Day Mart for Korean Groceries.  I found the market to be tiny and scantily stocked.  However, I spoke with the helpful owner, who is Korean, and he directed me to a supply of frozen spareribs for galbi. 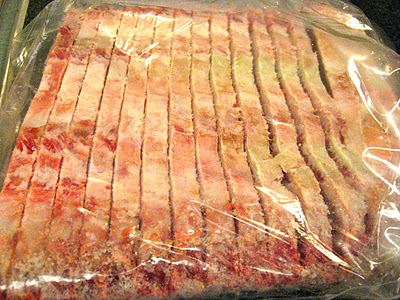 An entire 3 pound box cost $40, which was more than I wanted to spend at the moment, but he sells them by the pound.  Fresh meat at the grocery store would probably amount to a comparable price, so I bought half a box, plus a jar of kimchee.

Chap Chae
The blog momofukufor2 published a rendition of David Chang’s recipe for chap chae, which mentioned it was published in New York Times Magazine.  I took the liberty of adding pork which is optional.

May garnish with toasted sesame seeds (I forgot to buy them). 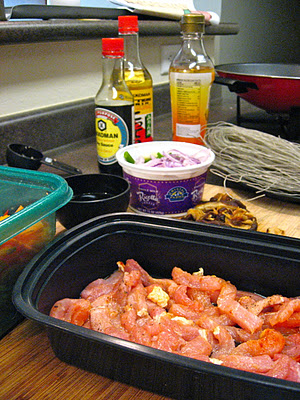 Directions:
If using dried shitake mushrooms, soak in cold water for at least 30 minutes or until soft.  Make sure you rinse them really well in clean water afterwards.  Cut into small pieces.  I have never used dried shitake mushrooms.  They smelled horrible, but mellowed after a soak and stir fry.  Hopefully this is normal. . .


Cut your pork into small pieces and marinate in soy sauce, mirin, rice wine vinegar, sesame oil, and hot red pepper to taste.  You can choose not to marinate the pork or use whatever marinade you like.  I just wanted to give the pork some extra flavor. 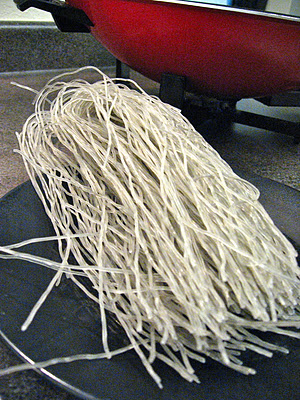 Place your noodles in boiling water and stir until tender.  Mine took several minutes and I watched them closely so they did not become too mushy.  Shock them immedietly in ice water, drain, and cut into smaller pieces with scissors. 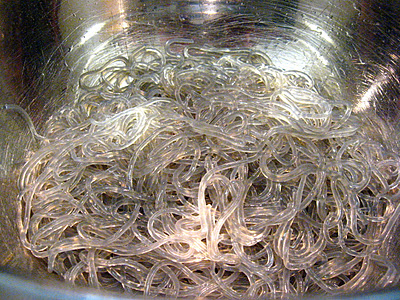 In a small amount of vegetable oil (not olive oil), stir fry the pork until cooked and set aside.  With a little more oil, stir fry the carrot, onion, mushrooms, and red pepper and season with salt and pepper.  Don’t overcook the vegetables to the point of being mushy.  Add the green onion and garlic and briefly stir fry, making sure the garlic does not burn.

Deglaze the pan with the mirin and stir in the noodles.

Serve warm or at room temperature. 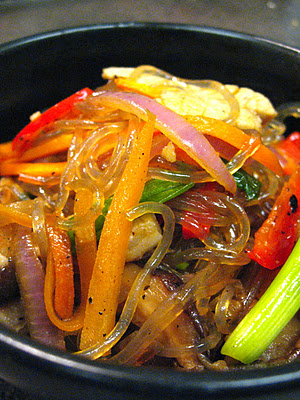 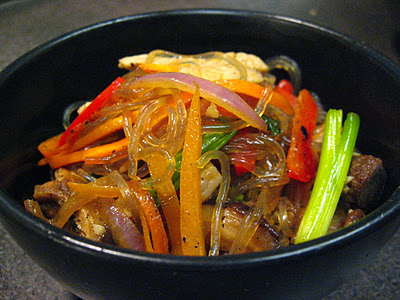