I find the perfect wand and receive the largest wine pour: Adventures in babysitting, dinner at Doolittles, and a few rants & raves.

October 7, 2011 / Jeni / 2 Comments
Setting the scene
I spent the afternoon babysitting a cantankerous, though, typically good-natured toddler.
At the lake, I find the perfect stick.  It’s straight as an arrow and smooth to the touch, as if it appeared from a Harry Potter novel.  I give the wand to the sleepy toddler and giggle as he tries to repeat “abracadabra.”  After playing with the wand, the toddler sneakily carries the stick to the dock, methodically breaks it in half, and throws it into the lake.  After pausing for a moment, he burst into angry tears and motions for me to retrieve the other half of his disappearing wand.
I raise my hands into the air, as if to shrug, and bemusedly mention that, after all, he was the one who chose to break his Harry Potter wand and throw it into the lake.  My logical reasoning becomes lost in translation.

And so I scramble to find him a new wand.

At the beginning of dusk, the sleepy babysitter rushes home to Jake to use a generous gift certificate to Doolittles Woodfire Grill, gifted by my family.
Doolittles Woodfire Grill
2140 Cliff Road
Eagan, MN 55122
651-452-6627
Jake and I arrive at the Doolittles location in Eagan for a late dinner.  This is not the Doolittles of my childhood.  It’s extremely busy.  Swank.  Noisy.  Glamorous women camp out at the bar.  Roasting chickens spin by the entryway.  And additional locations span north to Alexandria.
A hostess quickly seated us at a large, elevated booth where we were blinded by spotlights.  Jake and I scooted around every inch of the curvy booth until we found a comfortable view, squished on the end adjacent to the patio door.  Fortunately, it is a warm evening and we have a decent people-watching post.
I received this substantial glass of house red wine.  A bit too substantial for my hungry/tired state.  Despite the bread. And appetizer. And double protein dinner. 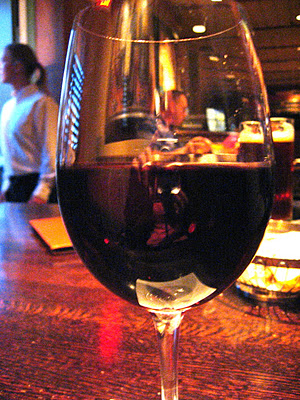 Next, arrived a basket of complimentary bread and butter packets.  The bread had a pleasant, salty herb rub on one side. 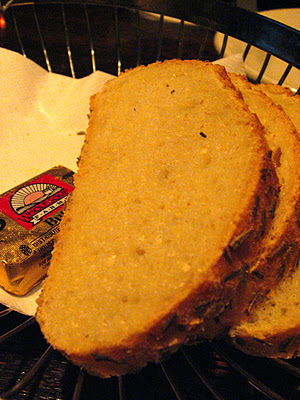 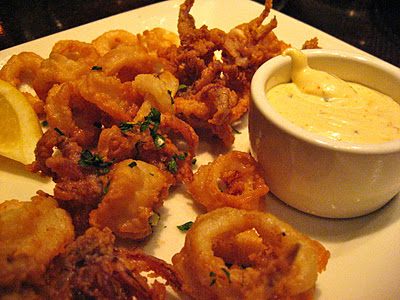 A delicate aioli squiggle adorns the top of the ramekin.  The calamari rings and tentacles arrived crispy and slightly oily.  The squid was tender and its flavor was not fishy.  A few spritzes of lemon accounted for the lack of noticeable lemon-herb gremolata and salt.  I enjoyed the aoli.  In summary, a decent version of fried calamari that would serve two.
As entrees, Jake and I both ordered the chicken and ribs combo, $17, including fries and coleslaw. 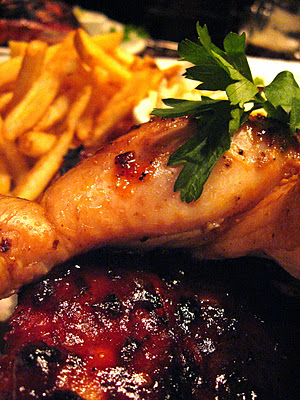 Each plate included a quarter chicken and slab of approximately five-six pork ribs.  The crunchy coleslaw was heavily creamy and slightly bland but pleasant enough to eat alongside barbecued meats.  I enjoyed dipping my fries into the extra coleslaw dressing.
Most of the under-salted fries were crisp, while some were slightly chewy.  I am guessing these were previously frozen.  Really fantastic fries would significantly elevate the entrees.  Fries and coleslaw are foods I enjoy enough to, at the very least, “tolerate.”  These sides lay somewhere between “tolerate”and etherial. 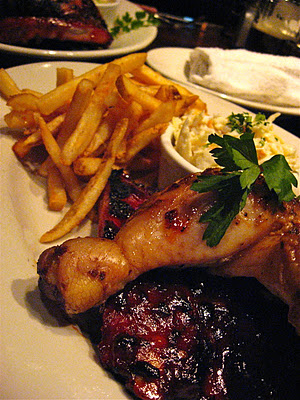 The meat is where things get good.  The rotisserie chicken was as succulent and tender as butter.  Although the skin wasn’t crispy, it was rendered thin and seasoned well-enough to consume.  Flavorful chicken juices and liquefied fat oozed from my hands as I dismantled the chicken with my fingers.
The ribs were tender, but not as in “fall off the bone.”  And for this I am thankful.  If you want to irk me, serve me ribs whose meat tumbles from its bones.
I don’t know how these ribs were cooked, but unlike baked varieties, they did taste smokey and lacked fat or gristle (though I did not notice a prominent smoke ring).  The ribs were cooked properly enough to render away the fat, leaving flavorful meat that is tender to the tooth.  The barbecue sauce carried a small spark of heat and was not too sweet.  Really, it was well-balanced and I should have asked for extra since the ribs were sparsely coated.
Jake would order chicken only on a hypothetical re-visit while I would choose ribs.
Don’t knock Doolittles.  The service was efficient and smooth.  I have not tried other menu options, but as far as our visit was concerned, meat ruled the evening.  Not the least expensive casual dining option, but I enjoyed leftovers for at least two extra meals.  Unfortunately, Jake can’t say the same.  Although I’m too small for most clothes and can’t buy a dress off the rack, all I need is one glass of wine and I always take home leftovers.
Etc. . .