Jake’s work week is looking like it will add up to less than 70 hours and I wrote a three-page literature review in under 48 hours, which I didn’t hate or agonize over.  Also, unlike my last paper, I did not complete it 45-minutes before the deadline.  I believe these occasions called for frozen gyro kit self-medication. 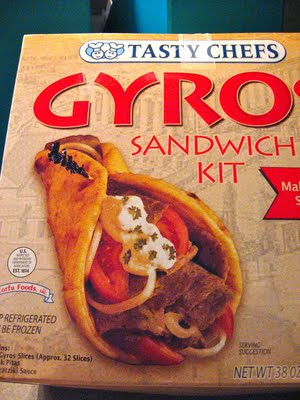 I recall this gyro kit cost around $8. 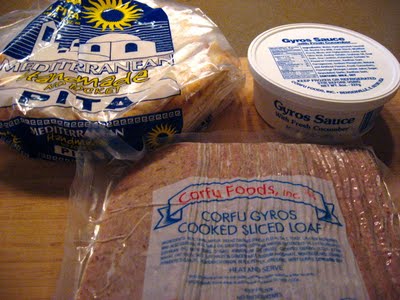 Mmmm. . . cooked sliced loaf.  This makes me giggle and remember when my old roommate and I compared school lunch experiences.  My former roommate grew up in a small town in Iowa and described a regular school lunch offering called “pork shape on a bun.”  She also mentioned sides of “butter sandwiches” made with a non-butter substance. 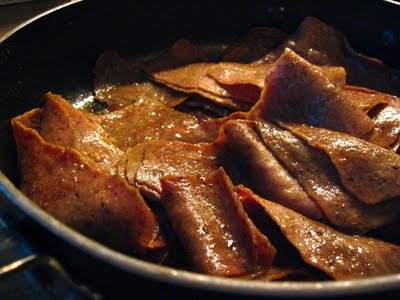 To re-cook this “cooked-sliced loaf,” I placed the unwrapped meat in a pan, added enough water to cover the bottom, along with a splash of olive oil, fresh cracked black pepper, white pepper, and cayenne.  Then, I let the whole pan simmer on medium high until thawed.  When the meat slices were thawed, I simmered them on a lower temperature to reduce the liquid and caramelize.

I wrapped the pita in foil and heated in the oven and defrosted the cucumber sauce. 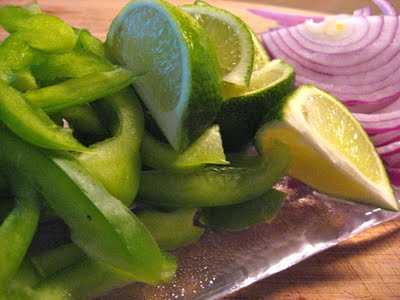 To garnish, I served the gyros with fresh green pepper, lime wedges, and thinly sliced red onion.  Ideally, I would also include romaine lettuce. 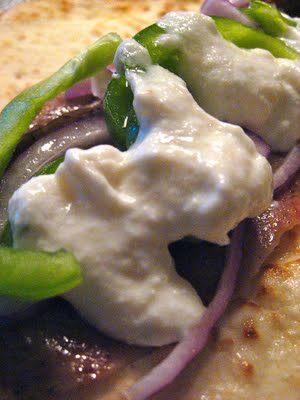 And pictured above is an assembled gyro.  For a frozen kit, the gyros tasted quite good.  Especially with the added fresh vegetables.  The cucumber sauce looked a bit grainy when de-thawed and was full of interesting thickeners and emulsifiers but tasted better than it looks.  A nice substitute would be the thick garlic sauce you can buy from St. Paul Flatbread Co. or Holy Land Deli.