The Brunch That Was Worth An Hour: Screen Door, Portland

There might not be a screen door at the Screen Door and you’ll probably have to wait an hour for brunch, but that’s OK and I’ll tell you why. But first, notes on the journey:

In August, right after we left St. Louis and before we had a moment to catch our breath in Minnesota, we traveled to Northern California. This was the first time traveling together outside of the Midwest since we got engaged. We planned an epic road trip zigzagging from San Fransisco through Napa Valley to Tahoe, west to the Avenue of the Giants, and up to Portland.

END_OF_DOCUMENT_TOKEN_TO_BE_REPLACED

The Waffle House: “An irony free zone where everything is beautiful and nothing hurts for everybody regardless of race, creed, color, or degree of inebriation is welcomed. . . Its warm yellow glow, a beacon of hope and salvation inviting the hungry, the lost, the seriously hammered all across the south to come inside, a place of safety and nourishment. It never closes. It is always, always faithful, always there for you.”
-Anthony Bourdain’s narration, Parts Unknown, Season 5: Charleston.

In the Charleston episode of Parts Unknown, Chef Sean Brock guides Anthony Bourdain through the wonder that is the Waffle House. Brock walks him through his preferred tasting menu-of-sorts which include the following:

END_OF_DOCUMENT_TOKEN_TO_BE_REPLACED

Two Places To Walk For Pancakes From The Hotel Lincoln

We stayed at the Hotel Lincoln in Lincoln Park, Chicago the weekend before Christmas and walked for pancakes.

For breakfast and brunch, the hotel’s dining options cover both ends of the spectrum: A coffee cafe and a high-end restaurant. What we were searching each weekend morning was an affordable, hearty pancake breakfast to fill us up for much of the day. Elly’s Pancake House and The Original Pancake House are located equal distances away from The Hotel Lincoln on opposite sides of Clark Street. A 5-10 minute walk will take you to both.

END_OF_DOCUMENT_TOKEN_TO_BE_REPLACED

A Bakery That Smells Like Butter In Belmond, Iowa

Last weekend, Jake and I postponed our little getaway to the Twin Cities. So, obviously, my second choice of destination was Belmond, Iowa, a small town of about 2,300 located 40 minutes southwest of Mason City.

On one of our first warm and sunny days in North Iowa, Beth asked if anyone was interested in joining her on a mini road trip. Her travel plans had been dashed by bad Tennessee weather, so her second choice was also Belmond, too. Why Belmond? The owners of Sugarpie Bakery & Cafe recently reached out to our North Iowa blogging group inviting us to visit.

I posted this photo on Facebook when we arrived in town.

One friend who grew up near Belmond asked me, “What in the world are you seeing in Belmond? Are you visiting Cattleman’s?”

Belmond has survived two tornadoes in recent history. In 1966, a tornado destroyed most of the downtown area, injuring 100 people, and killing six. And in June 2013, an F3 tornado hit the town destroying several local businesses including Cattleman’s restaurant which the Abel family purchased over 30 years ago. Cattleman’s actually reopened at the city’s golf club just this past November. We only had time for one meal on this trip, but so many people recommended Cattleman’s, we’ll have to return for dinner.

We arrived late Saturday morning so we could explore out some of the antique and gift shops our friends suggested. The main street was very quiet and most of the stores were closed. We watched as a fellow shopper tugged at the flower shop door. At first, she appeared surprised to find it closed, but remembered there was a big robotics competition at the school. We had to smile as we imagined the business owners cheering on their sons and daughters at this competition.

The day was so beautiful. We enjoyed strolling the awning-covered sidewalk and found an open thrift shop and pharmacy with a real soda fountain.

This Jazzercise storefront brought back happy memories. Jessica and I are children of the 90’s who grew-up with moms who religiously attended Jazzercise classes, while Beth was one of those moms. She recalled her Jazzercise outfit complete with leg warmers. We also passed by a Belmond historical museum. The sign said it was open by appointment and even listed four individuals’ phone numbers to call. We saw visitors inside as we left for Mason City.

Beth found a Teapot Tuesday treasure at the thrift shop and I bought an epic mug that I’ll share in the next Mugshot Monday. “What can I collect?” wondered Jessica. We also found Girl Scout cookies for sale by the register and lots of doll heads. The clown heads were my favorite.

We met Val and her kids for lunch at Sugarpie. What struck me upon opening the door was that the cafe smelled like butter. I don’t trust bakeries that don’t smell like butter.

At Sugarpie, customers can order breakfast or lunch. My friends gravitated towards hot pork and beef sandwiches, while the kids and I chose breakfast.I chose a Denver omelet ($7) filled with cheddar, ham, onions and peppers with a cup of coffee. I like how Sugarpie serves their coffee from an eclectic collection of mugs.

The previous week, I dined at Perkins with some blogger friends and still had omelets on my mind. When I was in high school and college, Perkins was the watering hole for flirting over chicken tender melts and ham and cheese omelets. I hadn’t visited a Perkins for years and was surprised to find out that about half of their omelets contained celery!

For whatever reason, this just cracked me up and I have been laughing about it ever since. This is what Jake refers to as a “Jeni Joke.” This Sugarpie omelet did NOT contain celery. In fact, none of them did, because most omelets don’t. My meal was simple and satisfying.

I got a kick out of this salt and pepper holder.

I have to admit, I eyed Jessica’s pulled pork sandwich. The pork was cut into thick chunks. When Val’s kids left the table to play with more toys, some of the adults nibbled in the leftover french toast sticks. These were no pre-frozen school cafeteria product, but long strips of real french toast.

I chose a flaky bacon and cheese turnover from the bakery case to share with Jake.

While we enjoyed our meal and chatted over coffee, the cafe’s tables and lunch counter remained busy with customers. Val’s kids had a lot of fun playing with toys and coloring on a chalkboard with the other kids in the children’s area. Val’s son was very dedicated to his craft of baking dominos into different flavors of crackers in the toy cash register. The dominos with yellow dots were cheese, the chocolate dots were chocolate, the green were pepper, and some of them were simply cracker flavored crackers. We nibbled on dominos as we chatted over lunch.

This cafe has only been open since September 2014 and owners report they’ve been so busy, they forgot about their six-month anniversary until after it had passed. I love big and little cities, alike, but there are some charms that occur in small towns that make them sparkle. Like Jazzercize awnings, stores closed on a Saturday so proprietors can cheer on their children at the school’s robotics competition, and real soda fountains in pharmacies. Every town needs a scratch bakery and coffee cafe that smells like butter.

Sometimes we use food as bargaining chips. For example, on Sunday morning Jake said he’d take me out for a fantastic, mid-week dinner date of my choice if I made pancakes. We struck a deal.

Of course I chose the easiest pancake recipe I could find. Fortunately, it was also good. Jamie Oliver’s pancake recipe is so simple. You don’t have to sift the ingredients or separate them into wet and dry. You just dump them all into the same bowl and mix away. While Mr. Oliver prefers grated pear, he adds that one could substitute most any fruit. I made good use of the lone apple sitting in the bottom of my produce drawer. 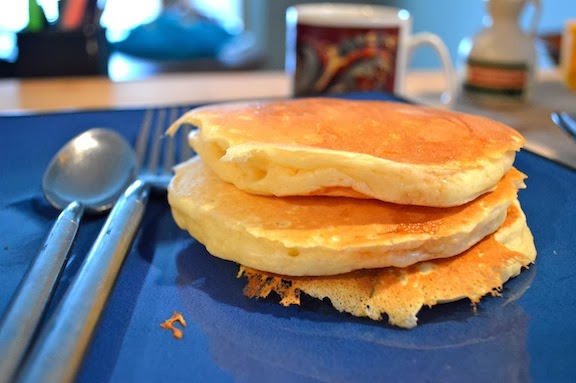 A Cook’s Note: Keep in mind that self rising flour is already salty.

Instructions:
Preheat a pan or griddle to medium heat.

Measure all of the ingredients into a large bowl and whisk until just combined. Seriously, it’s that easy!

Ladle onto an oiled griddle. Flip pancakes when bubbles form and the bottoms are browned. Cook until they pancakes are no longer raw in the middle, turning the heat down if necessary. The grated apple will make the inside of the pancakes moister than usual, so give them some extra time to cook.