Mason City: The Fun, the Quirky & the Just Plain Annoying

If there’s anything that I’ve learned from moving frequently for my husband’s job, it’s to stop taking my time, wherever I live, for granted. If there’s a person that I want to get to know better, I need to do it and if there’s a place I want to visit, then I should go. Although I did manage to see a lot of North Dakota and Western Minnesota while living in Fargo, I missed out on opportunities because I assumed there would be a “next time.”

Jake and I have officially lived in Mason City for just over two months. Within the past three years, we’ve moved from a metropolitan area of three million to a city of 200,000 to that of 28,000. Living in a smaller community has its advantages and disadvantages and Mason City’s not without its own joys and quirks. Here’s my take so far.
The Fun:
I finally got a haircut that I love.When we lived in Fargo, Jake and I returned to our Twin Cities stylists when visited our families, but now I don’t like using up our time at home on haircuts.
Jake’s still hesitant to branch out. Last year, we got impromptu haircuts that turned out to be the worst ones we’ve ever gotten. When we returned home, we just stared at each other and laughed. Jake looked like Dolph Lundgren from Rocky IV and I looked like an Asian Raggedy Ann doll. We should have known better than to be a stylist’s last client on a Saturday afternoon and not ask for referrals.
In Mason City, a couple people mentioned Color Couture. My stylist gave me one of the best haircuts I’ve had in years, plus a relaxing scalp, neck, and shoulder massage, and it cost less than I expected. If you are new to Mason City, I wouldn’t hesitate to recommend Summer at Color Couture.

Thank goodness for Mason City’s coffee shops. I rotate between three of my favorites when I need to get writing done.

Cabin Coffee is a small, local chain. They are one of the only coffee shops that sell savory (not just sweet) foods. If I’m in the mood for lunch, I order the smoked chicken salad croissant sandwich, but usually I snack on boats of seasoned kettle chips they sell of only $1. Cabin also offers a membership card that accumulates points with each purchase. Eventually, the points translate into discounts.

I appreciate coffee shops like Cabin Coffee that provide plenty of electric outlets and serve espresso beverages without pretentiousness.

Coffee Cat is a cozy shop downtown. The owner gave me one of the most sincere welcomes to Mason City I received during our first week in town. I was pleasantly surprised to discover they make homemade chai and sweeten it with honey. It’s a spicy contrast compared to the cloyingly sweet, powdered mix most coffee shops serve.I also enjoy spending time at Jitters located in the Southbridge Mall. Jitters is the best thing in the mall which is usually occupied by more mall walkers than shoppers. Like Coffee Cat, Jitters offers sweet, house-baked goods. I especially like their scones. The atmosphere is comfortable and the organic, fair-trade coffee is so smooth, you’ll forget that you are even in a shopping mall.
We are fortunate to have such kind neighbors. They have gone out of their way to welcome us to the cul-de-sac and I’d feel comfortable asking any of them for help. During our first month in Mason City, our next door neighbors coordinated a welcome party and we connected with our neighbors over cupcakes and coffee. This act of hospitality meant a lot to us and I hope we can return the generosity.

I am happy with our new vet at Brookview Animal Health Center.
Trayse is five and has never had a dental appointment so I wanted to check that box. The first vet I called wanted to charge me an additional $55 for a “new client examination” on top of their $200 base fee, even though he just had a full check-up in October.
Brookview offered a more affordable dental rate and did not require a new client exam. I just provided the documents from his recent appointment. They explained they don’t nickel and dime people for animal dental appointments because then no one would ever schedule them.Trayse’s first dental appointment went well and Brookview charged me exactly what they said they would, given their best case scenario quote. I also appreciate their honesty in informing me his teeth were in good condition and nothing needed extracting. The staff patiently answered all of my questions and I never felt rushed.I was also thrilled they offer existing clients free nail cutting services. Trayse’s last vet prescribed him with tranquilizer pills to take before his nail cutting appointments. And as if that wasn’t extreme enough, it took a muzzle and three people to cut his nails.When I related this experience to the vet techs at Brookview, they balked and said they never find it necessary to drug or muzzle their clients for nail trims, unless a dog is extremely large. I am looking forward to see if they can pull this off. Godpeed, Brookview, Godspeed.

As final notes, the office is tranquil and equipped with a friendly resident cockatoo, office kitties, and a large aquarium. You can also check your pet’s visit history on their online pet portal. Pretty spiffy.

To reach our house, one must pass through four uncontrolled intersections.
I didn’t even know that such things existed. Jake alerted me to this fact a few days after we moved into our house and I was horrified, for I had been driving right through them assuming the other side had stop signs.
Now that I know the intersections are uncontrolled, I stop to check for opposing traffic which is good because many drivers don’t bother to slow down. We try to warn anyone who might visit us that we’re located in a death trap. I can’t pass through these intersections without hearing Sheldon Cooper repeating, “It’s a trap!” in my head.Uncontrolled intersections might be safe in a small town, but Mason City’s population equals around 28,000 people. How hard would it be to alternate a couple of stop signs at every intersection? There seems to be enough traffic to warrant this. 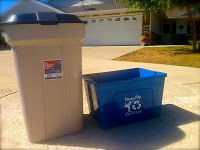 I just can’t seem to get a hang of the city’s recycling program. During our first two weeks, I was puzzled when the truck left all of the colored glass bottles in my recycling bin.
Finally, I read my paperwork and learn the city’s curbside program only accepts clear glass. I was left wondering what I should do with all of my colored glass and took them to the nearest recycling center connected to the grocery store. “Are you serious?” I thought, as the machines spat back all of the bottles I had bought at Target. Back into my car they went.
To illustrate, if you purchased a bottle of wine from Hyvee, they’ll add a $.5 deposit you can receive back in in store credit if you properly recycle the container, but you can’t just recycle it anywhere. As I mentioned above, the recycling truck won’t pick up the bottle if it’s made of colored glass and you can’t bring it to a store from which you didn’t purchase it. I finally sought the advice of a friend who said I either had to remember the store from which I bought the colored glass container or take it to a different recycling redemption center that isn’t specifically connected to a store.
I dislike that the curbside recycling program doesn’t pick up all of my glass and I hate hauling bags of dirty glass into my car and having to remember from where I bought them. And if you purchase a 12 pack of beer, the store will charge you $.5 per can that you will not get back if you let the recycling truck pick them up. Deposit or no deposit, I just wish it was easier to recycle.

This might all seem strange to those who live in a city whose recycling trucks picks up all of their recyclables and petty to those whose city doesn’t even have a residential recycling program but I suppose ours is better than none.

And now, I’d like to end on a silly note:

I snapped this photo last weekend while we were showing Jake’s family around downtown Mason City. You’ll have to peer through the window glare, but I think you’ll enjoy the view. 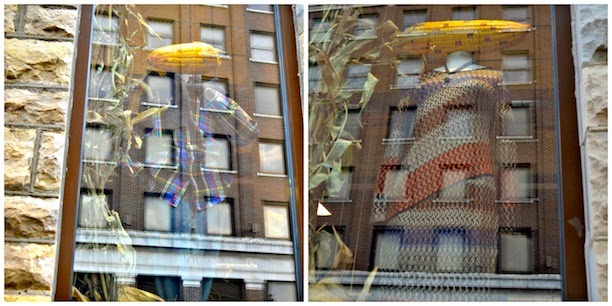 There’s a store with mannequins who have corn cobs instead of heads. Corn cobs!
It’s weird and it’s funny and I can’t help but like it.
Only in Mason City.
*This is not a sponsored post