At The Top Of A Landfill

Yesterday, I found myself at the top of a landfill.

When we closed on our new house, we removed the old carpet immediately. The previous owner had four pets who appeared to have soiled every inch and it would have been impossible to clean. The stench was atrocious.

Our realtor let us borrow his trailer to throw the old carpet into and, now, it was time to take the trailer to the landfill.

Neither of us had been to the landfill before, or any landfill. I had this mental image in my head in which we would pull up to a building and unload the carpet into a trash bin or pile. Or that men in trucks meet us at the trailer and take it all away.

We drove to the edge of town. Mason City is located on a flat landscape and I was surprised when I saw a hill looming in the distance and learned it was, in fact, the landfill. 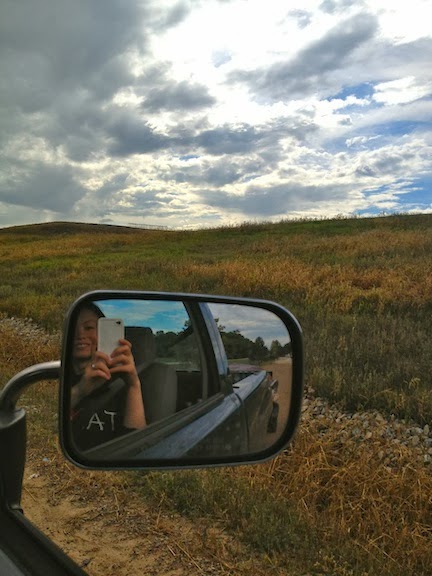 When we go to the landfill, we were instructed to drive onto the scale before we unloaded. Afterwards, we would be charged accordingly. I glanced through the price list and cringed when I saw $14 per animal.

Then, we drove along a path that winded to the very top of the landfill where clouds of seagulls circled. We were instructed to park in the midst of the fresh trash and just start dumping. I stared down at the wet ground dotted with used mattresses and diapers. The gulls surrounded the car. I was convinced they were going to defecate on us or eat us.

I wondered if I would step on a dead animal and felt a hysterical wave of panic overwhelm me. It flowed from manic laughter to strings of profanities that would make the likes of Jim Jefferies blush. 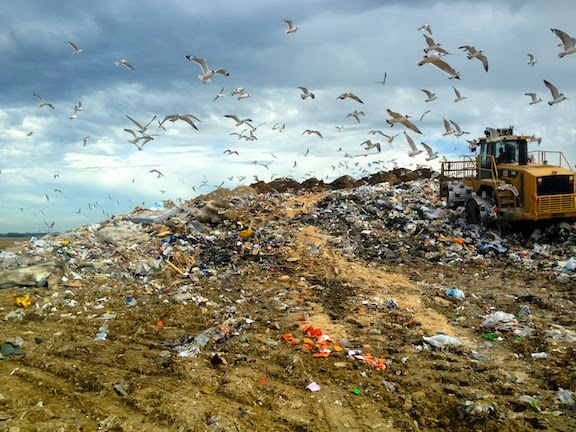 We struggled to back into a spot away from the oncoming semis and prepared to dump. Any smaller car would have gotten stuck. Can you imagine calling AAA to pull you out of the dump?

I lowered myself onto the foul smelling muck and jumped onto the trailer. I threw the old carpet rolls off the trailer like my life depended on it. The wind kept blowing the crusty carpet debris into my face. As soon as the last piece was thrown, we jumped into the truck and returned to the bottom of the trash mountain.

We passed by the lot where the city composts yard waste into mulch and dirt that residents can pick up for free. I’ll ask for a composter for Christmas so we can compost at home.

Regarding trash, the city restricts residents to two large bags each week. We can purchase stickers for $1 at City Hall that allows us to dispose of additional bags. I also learned the city only picks up clear glass, so I have to take the rest to a recycling redemption center. This perplexes me, but at least our recycling situation is better than it was in Fargo. Our huge apartment complex did not offer any type of recycling and I had to take it to a recycling center located in a parking lot. Even one of my employers, a major health corporation, did not introduce recycling bins until 2012.

The trip to the Mason City landfill served as a sober reminder that our trash does not magically disappear. Everything we dispose of has to go somewhere, and in our case, the trash gets piled onto the top of a giant mountain that looms at the edge of town.