RibFest is totally overpriced. It’s kind of gross, the music features throwback bands, and the food is a gamble. But we all end up going anyway. Sometimes, more than once.

The prior weekend, they started inflating the gazillions of jumping contraptions and on June 5th, RibFest opened in all of its glory. The first band to play was Sugar Ray. Need I say more? Welcome to 1998.

My husband received a couple of free RibFest tickets at work and refused to use them on a Sugar Ray concert. We compromised by sitting on lawn chairs and listening to them from our balcony over beers. For as much grief as I give Mark McGrath, we had a wonderful time. The evening was refreshingly cool and there was no wind, a eerie rarity on this windy prairie. We watched the band leap back and forth across the stage and I only remember laughing at them once. It was one of those tranquil moments you want to save for later and revisit when life feels overwhelming.

We went to RibFest on Friday evening when Blue Oyster Cult was performing. To save a few bucks, we enjoyed a beer at Buffalo Wild Wings before hawking over $6 per beer at the event.

My husband and I shared a boat of jalapeno cheese curds before searching for ribs. These would be the best thing we tasted that evening. I don’t remember the vendor’s name, but it was generic and served curds at a few stations. 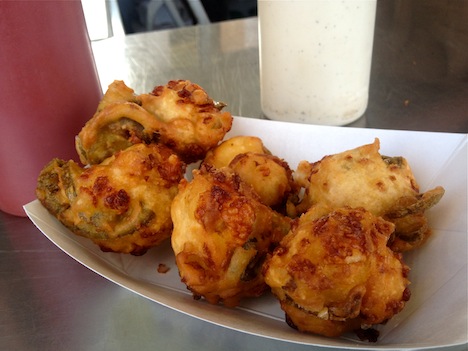 Stringy cheese. Crunchy, greaseless coating, and large slices of jalapenos. What’s not to like?

We settled into the long line at the Cowboys Barbeque and Rib Co. from Weatherford, TX. Several of us have actually eaten barbecue in Texas and our friends chose this stand assuming they’d be good. To give you an idea about pricing, they charged $7 for three ribs. These weren’t Flinstones-sized ribs but regular pork ribs.We ordered a half slab, plus a sides of macaroni and cheese and baked beans, each of which cost an additional $3.

Honestly, everything on this platter was rather unappealing. 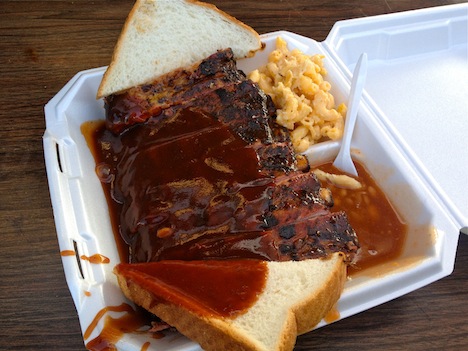 The ribs were tough and fatty. Their smoked flavor reminded me of the smell of mothballs. The barbecue sauce was fine if bland.

The mac and cheese and baked beans were scooped in measly portions that couldn’t have amounted to more than a half cup each. The macaroni and cheese was lukewarm with a weird, plasticy aftertaste and I had to really fish through the watery, bland bean liquid to find any beans. Looking back over my 2012 RibFest posts, I notice we unintentionally returned to the same vendor we visited last year with similar results. It came as no surprise this vendor didn’t win any awards. 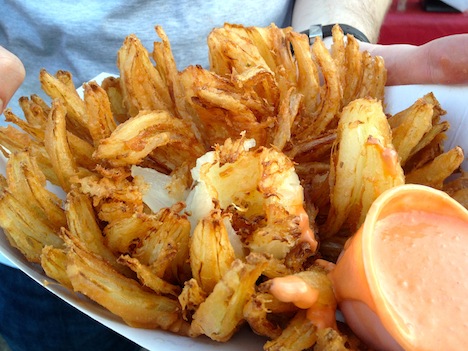 I didn’t leave until I got my blooming onion. Our second visit to 2012’s Ribfest was a disaster. We quickly abandoned my quest because the scary, drunk man who stood behind me at the ATM followed us to the event and tailed us as we wove through the crowd.

The onion petals were crisp and the staff actually took time to drain off most of the oil. The orange lava flow of sauce tasted sweet. I sprinkled the onion with various seasoning salts and passed it on when I began to feel sick.

I headed home as dark storm clouds formed and strong winds transformed the hot day into a bone-chilling evening. Blue Oyster Cult played on as I walked towards the exit, flinching as I stepped in a stinky, yellow puddle.

This is a Porta Potty-only event, ya’ll. It’s loud and crowded and dirty, but chances are you’ll probably return. We all do.

The Veggie (or chicken) fantastic is always a plea

Couldn’t say no when @hotindianfoods came to wor

This dressing from #traderjoes is so good. Reminds

I should branch out but.
I think Colita is legit

Delight is unexpectedly receiving a warm cup of ho

New post up: The ten best things I ate this year.

Instead of hovering around people sitting in a cro