I’ve never been that into burritos. This month, I’ve eaten two and I’m not sure what’s brought on this sudden urge to order burritos.

Juano’s
There’s no Chipotle in Fargo. Hell, there’s no Chipotle in the whole state of North Dakota. Live in Fargo-Moorhead and want Chipotle? Drive two hours east to St. Cloud. I visited Chipotle’s website to double check. When I entered in my zip code, it replied that there were no locations within 100 miles. It suggested searching again, with another city, state, or zip code. And then it added, “Or move.”

Or move? What the heck, Chipotle? Why would you even say that?

We may not have Chipotle, but we have other casual/carry-out Mexican-themed chains like Qdoba, Panchero’s and Moe’s Southwest Grill. If you want to visit a regional chain, there’s the newly opened Red Pepper location (thoughts on my first and only visit) and Juano’s. Since one Red Pepper visit was enough for me, I headed to my nearest Juano’s location for a take-out lunch. A couple friends with similar tastes mentioned Juano’s offers their favorite Mexican food in the community. There’s a fancier sit-down location on Broadway in downtown Fargo and a few other quick-serve locations. 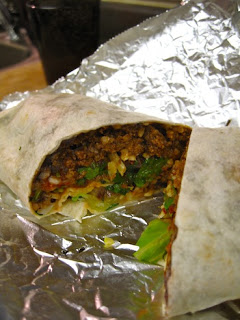 I don’t know if this is a company-wide special, but North Fargo’s Juano’s offered a $5 burrito wrap between 11 a.m.-3 p.m. This was quite a deal considering the rest of the menu hovered around $10. I filled my burrito with rice, black beans, ground beef, lettuce, cheese, fresh cilantro, and their spiciest salsa. The ground beef was nicely seasoned. While some may have considered it too salty, but I’m fine if foods push this boundary just as long as they don’t leap over it. The black beans had a texture more like refried beans which took away some of the burrito’s textural contrast and the salsa was less spicy than Chipotle’s hottest, but overall, this was a flavorful burrito.

I noticed they can also drench burritos in chili sauces. Juano’s downtown location offers its menu with prices on their Facebook page, though I can’t find an official website with information on their other quick-serve locations.

Paula’s Cafe (Steakhouse & Lounge)
On my day off, I headed up I-29 towards Mayville, North Dakota. I first visited Mayville in mid-March and made a note to return to Paula’s, a bustling cafe along the main street. There was just something about this cafe that fascinated me. I started following their Facebook page and admired their daily specials featuring good ole’ home cooking as well as photos of smoked meats. Mayville’s about 45 minutes from Fargo and I braved the windy drive on a dreary spring morning.

I parked along the main street and entered what looked like a mostly empty diner equipped with an old fashioned counter. I asked a server where I should sit for lunch and she directed me to the dining room. I followed a sign instructing me to seat myself. Once inside the dining room, I passed a salad bar and searched for a smaller table for one. When I couldn’t find one, I chose a table in the back. The other customers appeared to be regulars who knew exactly what they were doing and I was confused. It didn’t seem like anyone had noticed I seated myself, so I went to the salad bar and asked a server about the protocol. I wondered if I supposed to eat the salad bar or order from a menu. Everyone else seemed to be enjoying salads and I didn’t see any menus. I tried to explain that this was my first visit and I had no idea what I was doing.

The server may not have heard me well because she instructed me to help myself to the salad bar, mentioning I could go back as many times as I liked. I thought it was odd that the salad bar was the only thing offered for lunch. But since I was there, I filled a plate with vegetables, a toasted roll, and small cup of potato au gratin soup. When I reached my table in the back, I found some ladies congregating around my seat. At first, I optimistically wondered if they were going to join me, but when I noticed one woman grabbing towards my purse, I got the idea they were trying to move it elsewhere. I wondered where, exactly, they planned to place my purse, phone, and book. Anywhere except there, I suppose. A server noticed what was occurring and walked over to assist the ladies. I asked if I should move, but the server relied, “no” and helped them find a different, empty table. 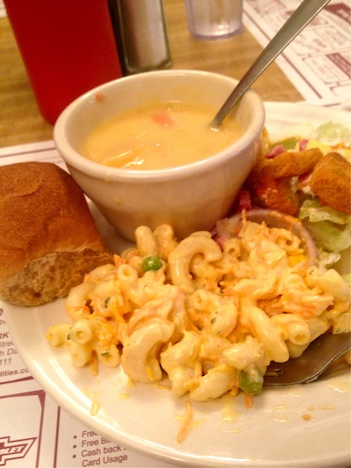 I sat down to eat my salad and noticed others had beverages. I found a server and asked if I could have a glass of water and she came over right away with a large pitcher and a couple glasses. At this point, I felt rather sheepish about eating by myself. After a few minutes, I noticed others eating hot foods and asked if there was a lunch menu. She brought one over quickly, explaining the daily specials. I chose the beef burrito. Along with the salad bar, it cost under $9.

While I waited for my entree, I nibbled my plate form the salad bar which included the typical offerings. The salad was fresh. The piping hot potato au gratin soup tasted exactly like the boxed versions of potato au gratin I used to enjoy at my grandma’s house. 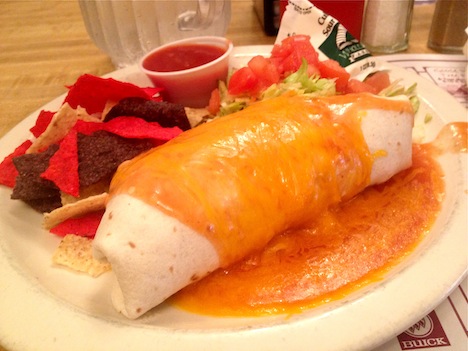 Th
The beef burrito was generously-sized and covered with melted cheese and red sauce. It came with some shredded lettuce, diced tomato, a tube of sour cream, chips, and salsa. Although the salsa seemed canned or bottled, it carried a pleasant kick, along with the red sauce. The best part of the meal was the tender beef inside the wrap. It was a little smokey and fork tender. I don’t doubt that Paula’s knows their meats. In hindsight, I should have just chosen a burger. A local reporter spoke highly of the burger and I feel silly assuming the salad bar and beef burrito would make a healthier choice.

The dining room was quite busy and once I landed on the servers’ radars, they showered me with “huns” and “sweeties.” I think the awkwardness can be more attributed to the fact that no one was used to new people who didn’t know what to do.

Solo dining is always an adventure. Sometimes, I feel perfectly at home and other times, I feel awkward. Cafe 116 in Fergus Falls, MN and Harvest Thyme Bistro in Wadena, MN come to mind as being especially comfortable for a solo, female diner. This was one of the more awkward meals where I was especially aware that one thing was not like the other (that one thing being me, the non-regular). I felt the curious stares from the regular diners.

Being open to adventures means taking in the awkward along with the cozy. For me, the most anxiety-ridden experience is often walking into the cafe of a close-knit community, alone. However, it’s impossible to learn about or connect with others unless someone takes a chance and my favorite way to do this is trying the local food. I truly believe people are good at heart. . . even if they are trying to move me to a different table.