I have a confession to make.

Jake, on the other hand, likes aliens. He finds them more probable than ghosts, but I disagree.

To be realistic, I’m terrified of ghosts. Never in my life do I actually want to see or encounter one. But nevertheless, I still like ghosts.

This ghost talk brings me back to a conversation Jake and I recently had with friends. We discussed living offensively vs. defensively over Rhombus Guys pizza and half-priced wine (we especially liked the Louisiana Saturday Night). I live offensively enough. I’m usually game for new experiences, as long as they start before 8 p.m. Jake mentioned he feels that as he’s gotten older, he’s come to live life more defensively, which has resulted in a smaller pool of stories.

When I reflect back, my most interesting stories occurred during travel. And not just long trips, but local road trips, too. In the spirit of adding new experiences to the old story bank, I convinced Jake to join me on another adventure down I-94. We stopped in Sauk Centre to visit the Palmer House Hotel on our way to Saint Paul, MN.

If you take the Sauk Centre exit and turn left, you’ll find yourself on Main Street within minutes. The Palmer House Hotel is located along the heart of my favorite type of classic Americana main street. It’s a striking, three-story building made from red brick and impossible to miss if you’ve seen a photo. The hotel was rebuilt in 1900 and was the city’s first building with electricity. Sinclair Lewis, the first American to be awarded the Nobel prize in Literature, hailed from Sauk Centre and used to work at this very hotel. Literature buffs can visit the Sinclair Lewis Interpretive Center, located right off the freeway, and his childhood home.

Even more so than Sinclair Lewis, I’ve seen Palmer House noted for it’s paranormal activity. The hotel has seemed to have been explored by every paranormal investigation group in the region and was recently featured on the Travel Channel’s Ghost Adventures.

We walked into the lobby and were directed to seat ourselves in the pub (bar). At three p.m., the hotel was extremely quiet. Nevertheless, the woman who served us was attentive and friendly. We warmed up with hot coffee delivered in large, clay mugs. They were the type you grip with two hands and, for some reason, I found joy in this.

We learned happy hour had just begun and appetizers were half-priced. Since it was before five p.m., the dinner menu wasn’t offered yet. The lunch items consisted of appetizers, soups, sandwiches, and salads. I wasn’t terribly hungry and ordered the ham, cheese, and pineapple quesadilla.

Jake ordered a burger with blue cheese and caramelized onions, and a side salad. 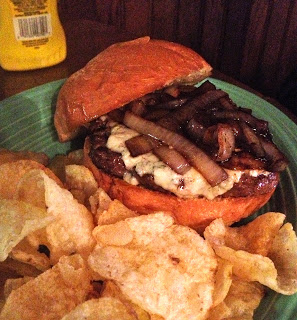 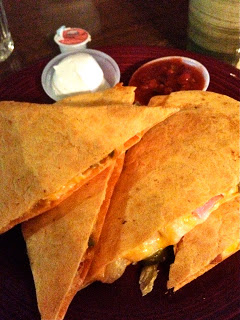 My quesadilla was good enough. Overall, a satisfying appetizer at less than $4.

Jake’s burger was cooked through (I don’t think he was asked about doneness and he forgot to ask), but it was moist and covered in plenty of caramelized onions and creamy blue cheese. The bun was buttered and nicely toasted. The side salad was like a typical iceberg lettuce mix. Nothing remarkable but it was fresh and the dressings tasted good.

The hotel appeared clean, though slightly worse for the wear. The exterior of the building conjures glimmers of its historical richness, and the interior looks like it was decorated by one of our Midwestern grandmothers. The lobby restrooms were also clean, yet worn. Curtains, instead of doors, shaded the stall and a wooden stick propped up the sink. The hotel management displayed a note by the mirror  acknowledging they were aware of needed repairs, but needed to wait for insurance settlement money to arrive.

Side note for the ladies: The hotel thoughtfully offered complimentary feminine supplies in little baskets within each stall.

All in all, our meal was decent and affordable, especially with the happy hour discount. The Palmer’s lunch menu wasn’t worth a special trip in itself, but the hotel was a pleasant place to pause for hot meal and break from the drive. Visiting a building steeped in so much history and lore felt like an adventure in itself and the service was hospitable. And, ghosts.

Sauk Centre’s charming main street is very accessible from the freeway and about halfway between Fargo-Moorhead and Minneapolis-St. Paul. I also noticed other restaurants and cafes and would like to return for further exploration. Returning for dinner could be fun. Maybe after I have a chance to read one of Lewis’s literary offerings.