Jake and I enjoyed one of our longer stretches away from the Twin Cities. It fell between our wedding and Thanksgiving. Now, we’re back to traveling back and forth along I-94 for the holiday season.

This past weekend we celebrated the engagement of Jake’s youngest brother and his fiance. On the way back to Fargo on Monday morning, I stopped at Kay’s Kitchen, in St. Joseph, a restaurant that has served breakfast since 1972. St. Joseph is the home of the College of Saint Benedict and Saint John’s University so I guessed it would have a decent cafe or diner. I had remembered finding Kay’s Kitchen on a web search for breakfast along I-94 months ago.

I sat in the diner part of the restaurant and perched on a bar stool along the counter. The woman working there quickly offered me a bottomless mug of coffee, $1.69, and provided me with a menu. Little plastic containers of cream and a jar of sugar were already at the counter.

For breakfast, I chose the Silver Spoon Omelet, $7.99, described as having avocado, tomato, onion, bacon, mushrooms, and cheese. It also came with my choice of wheat toast and hash browns. After a short wait, my breakfast arrived. 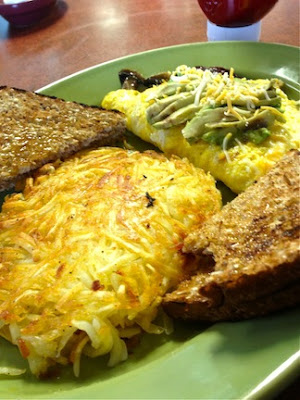 The omelet was fluffy and I liked its texture. The inside was filled with plenty of caramelized mushrooms, onions, and large pieces of crunchy bacon. I love mushrooms, especially when cooked to a golden brown. The avocado on the top of the omelet was a little droopy and slightly oxidized. It didn’t taste bad, but could have been fresher.
The omelet, as a whole, tasted quite good, but I didn’t like the little dribbles of oil from the inside. These either from the sauteed vegetables or bacon grease. I enjoyed the hash browns. They were crispy on the outside and creamy on the inside. They were also nicely seasoned. The wheat toast was dense and grainy and spread with margarine. I helped myself to the plastic packs of strawberry and grape jelly available on the counter.
In summary, breakfast was fine. I appreciate that Kay’s used fresh mushrooms instead of canned. I hate canned mushrooms.
The service wasn’t notably warm, but it was attentive. My mug was frequently refilled with hot coffee and I received my bill quickly which was helpful since I was driving directly to class in Moorhead.
Although I enjoy breakfast foods, restaurant breakfasts don’t often strike me as life changing. More often than not, they have been decent, but not life changing. But that doesn’t keep me from searching.
Nine Breakfasts That Changed My Life