Post orientation Hunger Games, Jake treated me to dinner at the Hodo Sky Prairie rooftop patio.  I washed away the day’s blood, sweat, and tears with a hearty glass of sangria, $9. 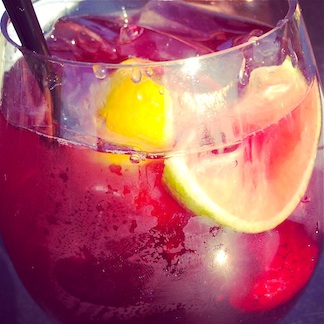 The beverage was refreshing and filled with a lot of fruit, though weak from an alcohol standpoint.  I know this because I, a lightweight who had only eaten a small cookie for lunch, did not feel buzzed.  Normally under these circumstances, I’d be tanked by a half bottle of light beer.

For dinner, we both ordered the American Double Cheeseburger special, medium rare, $8. 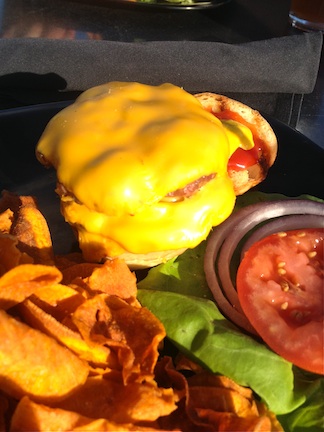 The burgers were deceptively small as the patties were quite thick.  They were juicy and actually cooked a little south of medium rare (which is better than overcooked) with a flavor like sausage.  We topped them with the accompanying ripe tomato, tender lettuce leaf, and red onion.

Sides included crispy, homemade sweet potato chips and a trio of pickle spears.  It seemed strange they were served three on a plate for two people.  Guess who just got one. . . 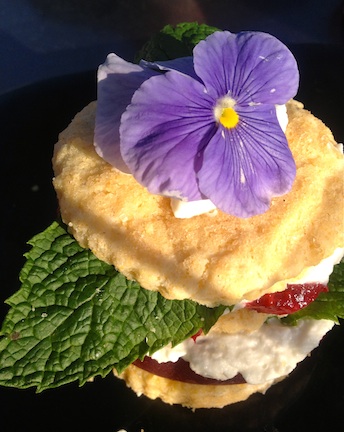 My favorite component was the tart rhubarb.  The shortcake was buttery but seemed a little bland, possibly benefiting from a dash of salt.  While the mint leaves added a beautiful flair, they seemed impractical to eat.

On Saturday evening, Jake got lucky.

For two weeks, I had badgered him into accompanying me to Bonzansaville’s Pioneer Days festival.  Think North Dakota’s version of Murphy’s Landing.  Fortunately for Jake, I learned Bonanzaville closed at 5 p.m., a mere half hour before I could corral him out the door.  With an admission price of $12 each, we made alternative plans.  I sulked while he rejoiced.

Plan B was errands and dinner.  We journeyed towards the bright lights of Paradiso Mexican Restaurant, a North Dakotan chain with four locations.  Tonight was the night to discover what what Paradiso was all about.  It loudly beckons from Interstate 29’s access road with fluorescent lights, and its parking lot is always full.

We walked inside waited along a throng of families.  Women sipped on margaritas in colors not found in nature.  When our buzzer sounded, we were lead through rooms that expanded into rooms.  One featured a large fountain while others were decorated with statues of children playing musical instruments and playing games.  Imagine the White Witch of Narnia’s courtyard.  Except happier.

Our waiter was a friendly college student who reminded me of my brother.  We were immediately fond of him.  Paradiso delivered on its catchphrase, “The chips are free.  Dinner’s extra.”  Our server brought us a basket of warm chips and a mild salsa (bottom left). 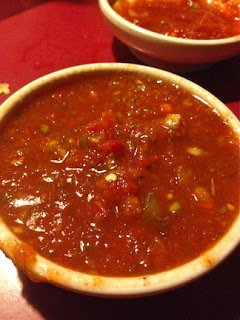 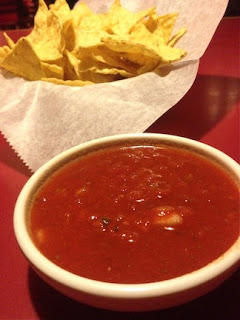 The salsa tasted fresh, though we wished for more heat so we asked our server if Paradiso had any hot sauce.  Instead of bringing us a commercial bottle of hot sauce, he provided a spicier and more garlicky version of fresh salsa (top right).  And when we polished off our first basket of chips, he brought a second.
As entree, I chose the Chimi Fundito filled with chicken while Jake ordered chicken fajitas with a side of re-fried beans. 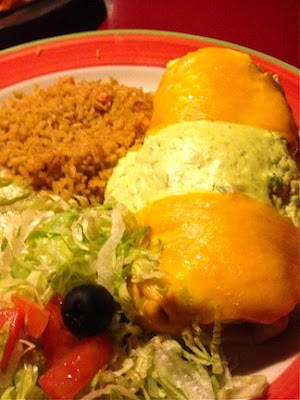 The chicken in the chimichanga was moist and the creamy, green sauce was a little spicy.  In addition, the side of rice was flavorful without tasting like the artificially stinky versions I usually hate, and the re-fried beans were light and well-seasoned.  I just don’t have anything bad to say about my meal.

Jake said he enjoyed his fajitas, adding, “It’s hard to mess up fajitas.” 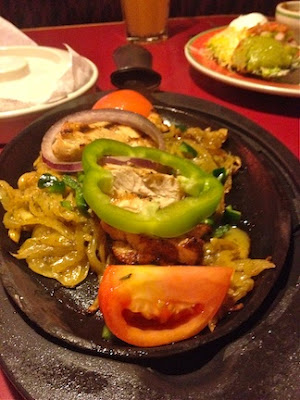 The chicken breast sat on top a large pile of sauteed onions.  They were so thinly sliced they bordered on mushy and tasted of margarine or butter flavoring.  Not what I expected to taste, but I ate some anyway.  Jake nibbled from my plate, commenting that my re-fried beans were much better than those he had ordered as a side.  Then he ate much of the remainder of my burrito.  Our bill for two entrees and two beers was $40, plus tip.

We were both too full to indulge in the fried ice cream dishes that kept floating past our table.

Paradiso was packed with families celebrating birthdays and screeching, crash-banging children.  The menu offered only Americanized choices like burritos and enchiladas and the margaritas ran in rivers of banana and electric blue.  I wanted to hate it, I wanted to mock it, but I just couldn’t.  I might have been having too much fun.

Mango’s Mexican Grill is still our Fargo-Moorhead favorite, but I thoroughly enjoyed my giant enchilada.