The other weekend, I brought home this amazing Santa Bear Sandwich Cookie Pan, circa 1986. 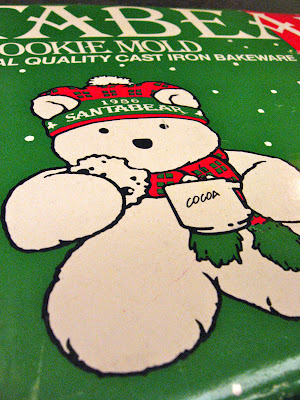 So many of us who grew up in the Twin Cities have fond memories visiting Dayton’s 8th floor Holiday displays in Downtown Minneapolis.

Jake and I both remember cuddling with lots and lots of Santa Bears in our childhood rooms.  My mom did not collect as many Santa Bears as Jake’s, but accumulated this heavy, cast iron Santa Bear sandwich cookie pan around Christmas of 1986.  I have no idea where my mom stored this cookie pan as I have never seen it before. 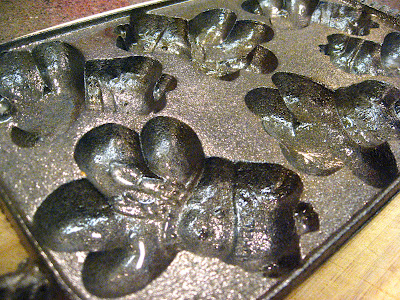 I stayed in my apartment with a cold on Saturday and spent the morning seasoning my unused, cast-iron pan by heating it and brushing it with oil, letting it cool, and repeating.

I made homemade frosting and followed the cookie recipe on the box, making a double batch.

The recipe seemed strange and included a large proportion of flour, corn syrup, orange juice, and both vanilla and almond extracts. 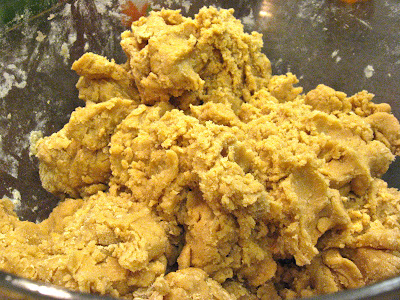 The directions instructed me to press the dough into the mold.  Therefore, I assumed my dough was made correctly even though it seemed dry.  I tend to be flighty but made sure I doubled all of my ingredients.

The flour would not fully incorporate into the dough so I kept adding orange juice until it held together.  Then, I pressed the dough into the molds. 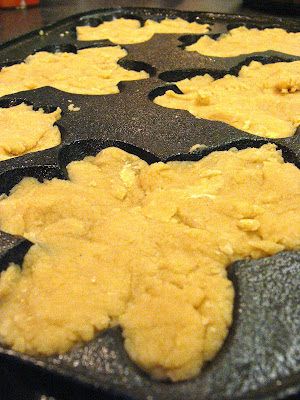 I baked each pan for 17 minutes and removed the cookies to cool.

Uh oh.
The Santa Bear halves were extremely large and heavy as rocks.  With a double batch of dough remaining, I persevered through my doubts that anyone would want to eat two of these giant rock cookies sandwiching anything.
After making enough Santa Bear front and backsides to make nine, enormous sandwich cookies, I gave up.
With lingering shreds of hope, I optimistically filled the sandwich cookies with a homemade buttercream icing.

Then, I took a bite.
Yuck.
The cookies tasted as dense and they felt and were blandly floury.  How one would ever want to eat a whole cookie is beyond me.  I passed my maimed sandwich cookie to Jake.
After one bite, he handed it back.  We agreed that the cookies could not be redeemed.  They all had to go, as well as the leftover dough.
I accidentally dropped a cookie on the floor and was mildly amused when it did not break, let alone dent.  Or chip.
Dear Dayton’s Company, circa 1986. . . did you actually test these horrible cookie bricks?  Not only do they taste unappealing, but pose as a hazard in the kitchen.
And in life.
Just one half of these sandwich cookies could severely injure a small individual or maim a large beast, if tossed in their general direction.
I will not re-post the recipe because it’s truly craptastic and I would hate for any of my readers to accidentally make these cookies, Santa Bear mold or not.
What I will post is the yummy frosting recipe I found on this thread on Chowhound.  It may not be authentic buttercream, but it’s good enough for frosting haters like myself and easy to make.  The original recipe came from the a poster named Axalady’s grandmother.
Vanilla Buttercream Frosting: The only redeeming element of my Santa Bear cookies
Ingredients
4 Tablespoons flour
1 cup whole milk
1 cup of butter (two sticks)
1 cup sugar
1 teaspoon real vanilla extract
Directions
Place the flour and milk in a saucepan and slowly heat over medium low-medium heat.
Whisk constantly until the liquid thickens into a paste.
Set the paste aside to cool.
In a bowl, cream together the butter and sugar.  Stir in the vanilla extract and slowly beat in the cooled milk-flour paste, little by little.
As you beat the mixture, the sugar will continue to dissolve.  I used granulated sugar and my finished frosting was smooth except for a few, stray sugar granules.
Enjoy your Santa Bear-less frosting.