On a chilly evening, a bowl of flavorful, cooked greens comforts me like a fleece blanket. 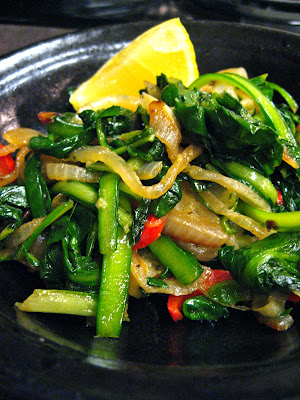 Although kale and swiss chard seem to be served the most often, I actually enjoy the flavors of beet and dandelion greens the most.

The stems are perfectly edible and delicious.  Chop the stems thinly, depending on their tenderness.  Even tough, thick stems will become tender after cooking.

I prefer to blanch most greens before a saute to give them a nice texture and preserve their color.

On several occasions, I have found fresh kale at Sydney’s Health Market.  I bought this gigantic bunch of organic dandelion greens during my first romp through the wacky world of Fargo’s Cash Wise.

The slight bitterness from the greens, tartness of the lemon, sweetness of the caramelized onions and mirin, umami saltiness of miso paste, and gentle heat from the chili create a balanced bowl of greens. 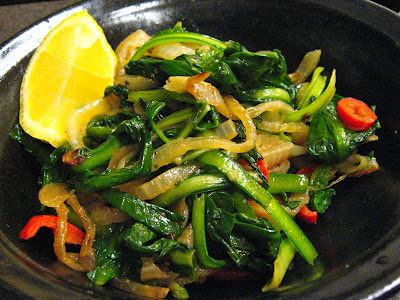 Directions
Bring a pot of water to boil.

Wash the dandelion greens and cut into manageable pieces.  Cut the tougher stem into smaller pieces.

Blanche your dandelion stems and greens in the boiling water for a couple minutes, adding the stems first.  Quickly shock them in ice water until cooled.  Squeeze out most of the water, and set aside.

In a pan over medium heat, caramelize your sliced onions in ghee and olive oil, adding a little sea salt and sugar.

Add the blanched dandelion stems and greens to your pan and stir, breaking them up with your spoon.

Add a couple dashes of mirin, miso paste, fresh lemon juice, and black pepper, all to taste.  Stir until incorporated.

For half of a large bunch of dandelion greens, I added about 1.5 teaspoons of miso paste and the juice from not quite half a lemon.  Taste and season to your taste.  I happen to like a lot of lemon.

This method would work with other greens.  You could also flavor them with other acids such as vinegars, salty elements such as tamari, and even bacon.