On Bird Mites and Brownies

We do not have bird mites.

I have never seen or heard of bird mites, until recently.

That being said, borderline hypochondriacs, like myself, should probably not be allowed to watch Infestation on Animal Planet.

The past couple days have been punctuated with many comments about bird mites.  Our apartment is often warm, so Jake opened the door to circulate some cool air.

Don’t leave the door open. There might be bird mites.

What about bird mites?

I woke up with a tiny, red dot on my shoulder that I quickly forgot about and it disappeared within an hour.  Bird mites?
Jake was looking into new bedding and asked for my opinion to which I replied,

What type of fabric is most resistant to bird mites?

And the finale to, roughly, 5/10 of our conversations:

We don’t have bird mites!  There are no bird mites here.  If bird mites were so common, why is this the first time we have ever heard of bird mites?

Yes.  But what about bird mites?

Or the alternate ending:

What better to soothe Infestation-induced anxiety, than brownies?  Jake asked if we could make brownies.  Translated, this actually means Jeni makes brownies if she feels so especially benevolent.

We both prefer our brownies chewy, dense, and fudgey.  Keep your cakey brownies to yourself.

The Chowhound thread The perfect chewy brownie directed me to Nick Malgieri’s Supernatural Brownies recipe published on The Splendid Table’s recipe page,  The New York Times, and Saveur.  The original recipe can be found in the book Chocolate: From simple Cookies to Extravagant Showstoppers by Nick Malgieri (Harper Collins, 1998)

Yes, they will consume four of your eggs, a whole block of baking chocolate, and two sticks of butter.  Lest you call me Paula Dean, they freeze beautifully and make a decadent treat to share with others.  A small bite goes a long way.

Check out the above recipes or try my less-putzy adaptation. 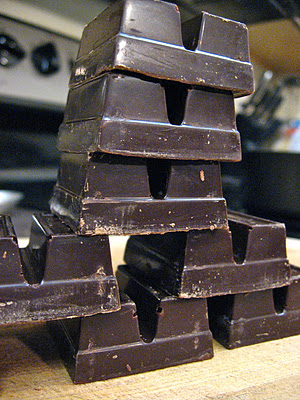 One recipe suggested lining the entire inside surface and sides of the pan with parchment paper or foil, but I found this step unnecessary.

Create a make-shift double boiler by placing a large, heat-safe bowl over a saucepan of boiling water, or prep a double boiler. 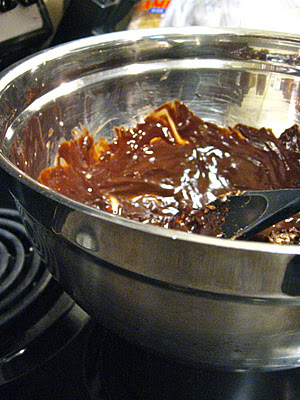 When the water boils, turn off the heat.  Add the chocolate and butter to the bowl and stir occasionally, until melted.  Set aside to cool a bit.

Then, stir in the slightly cooled chocolate-butter mixture.

Gently fold the flour (sifted if you’d like) into the chocolaty wet mixture. 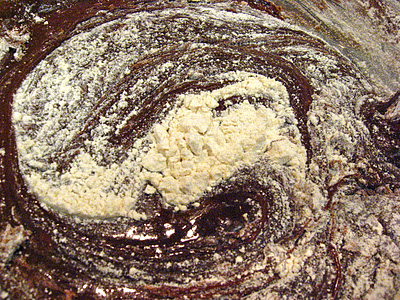 Scrape into the prepared baking pan and spread as evenly as possible. 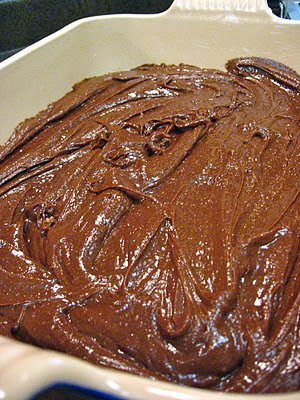 Bake for about 45-minutes.  The surface of the brownies should be shiny and the texture should be firm enough to cut. 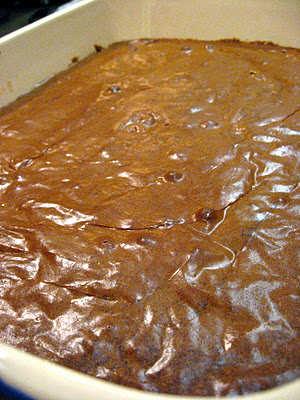 If you are patient, allow the brownies to cool before cutting.  For those of us who live on the frozen tundra, a balcony or front step makes a convenient cooling location. 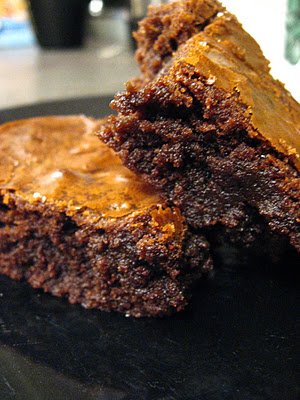 To store, I cut my brownies and wrapped them individually in plastic wrap, placing most in the freezer and leaving a few at room temperature.  The brownies are so rich and fudge-like, they are edible directly from the freezer and thaw quickly when removed.