During the past couple of weeks, Jake and I have tried to experience Fargo through food.

In a previous post, I wrote about my love for a cranberry and brie-filled croissant from Nichole’s Fine Pastry in downtown Fargo.  While I waited for the post office to open, I stopped by Nichole’s last weekend and bought a couple of desserts to take home.

The Trollwood Post Office is the strangest post office I’ve ever seen.  It’s located at the end of a rundown strip mall.  Everything is located in stripmalls, from post offices to libraries to NDSU departments to plastic surgeons.  I drove around the building three times before I noticed a small sign beneath an entrance with faded red lettering, nearly erased by the weather.  Following a sign that instructed me to ring a bell, I waited as a pleasant woman answered the large warehouse door and searched for my package while I waited outside in the wind.

While I was at Nichole’s, I noticed an interesting, purple dessert.  Though I can’t remember the exact description, the dessert was a maple-flavored panna cotta with a gelatinous grape topping.

Why this sounded good to me, I will never know.  But for a few dollars, I purchased the purple mystery and a slice of pumpkin cheesecake for $5.  Typically, I don’t often eat cheesecake because I find it too rich and dense.  Again, I must have been in an unusual mood because I was craving sweets and definitely felt drawn to cheesecake.

I had a suspicion that the grape dessert might swing towards really amazing or not so wonderful.  Jake tried one bite and was not a fan.  I had a strange love/not-so-in-love relationship with the dessert.  The grape topping was made with fresh, juicy halves of purple grapes suspended in a firm grape gelatin. Beneath, lay what had the mouthfeel of panna cotta and tasted of maple and caramel.  The combination of the two layers was odd and I was not sure I liked eating them together.  At the same time, I was also addicted to something about the dessert and eventually finished it. 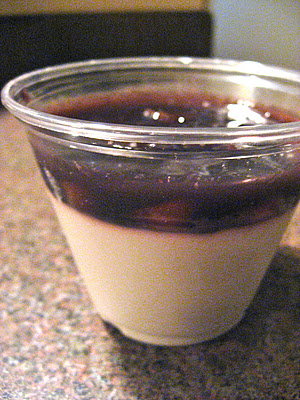 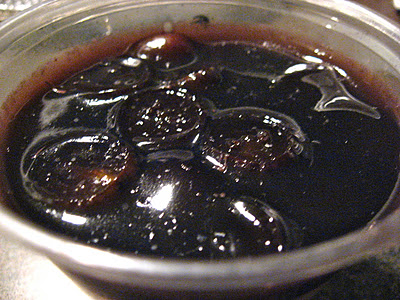 The pumpkin cheesecake was completely delicious, flavored subtly with pumpkin spice.  It was light and creamy and had a delicate “baked” texture.  Unlike the grape dessert, Jake also loved this cheesecake. 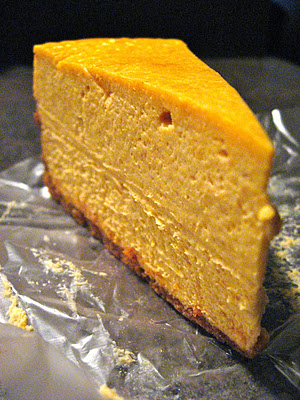 This cheesecake successfully avoided the cloying sweetness and heaviness that makes me hate most cheesecakes.

At some point during the past couple of weeks, I experienced my cyclical gyro craving.  Unlike the Twin Cities, there aren’t gobs of institutions serving gyros so I stopped by Cafe Aladdin, a restaurant someone had recommended (there are two locations in Fargo).  I ordered a gyro combo with french fries and sides of hot sauce and feta which cost about $13.  The combo came with my choice of beverage and I was happy to fill-up on fragrant, black tea.

Near the counter, I noticed a sign for Kronos and assume they buy gyro cones from this company like many others.  Most others?

I ordered my meal to-go and by the time I opened the container, the fries were incredibly damp and soggy.  Not that this stopped me from eating them.  The fries were covered in a red spice mixture that looks bolder than it tasted.  It was minimally salty. 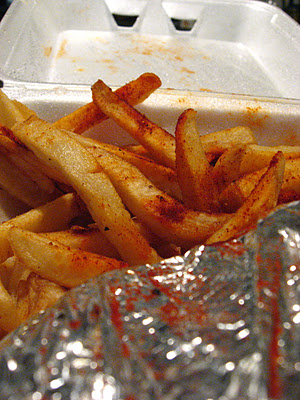 The gyro itself was generously without being a monstrosity (as in Holy Land Deli).  Although, it was loaded too full to really eat with my hands as the interior spilled out from each end, when handled.  Gyropolis in Bloomington, MN creates the most ergonomically-constructed gyro I have seen.

The meat itself was cut relatively thickly, and moist and juicy.  I prefer my meat more on the crispy and thinly-shaved side.  The yogurt sauce was thick and creamy and the tomatoes, fresh.  The gyro was covered in iceburg lettuce which I loathe because I dislike its slimy texture and smell when placed on warm food.  This is just a personal preference of mine.  I also did not notice any discernible onion, of which I added more at home.  Again, my nit-picky concept of a perfect gyro is garnished with plenty of raw onion to bite through the richness of the meat and yogurt. 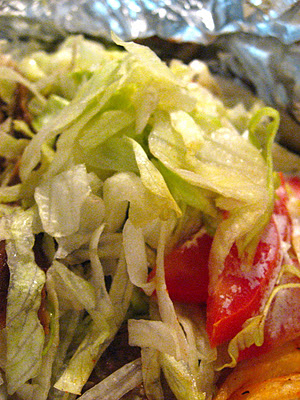 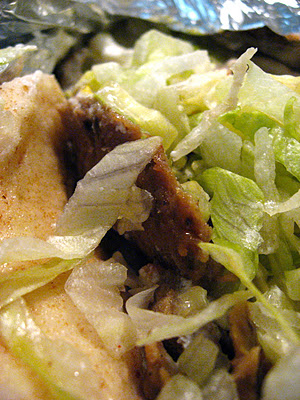 The hot sauce cost about 70 cents extra and I saw it poured into the cup from a jar. 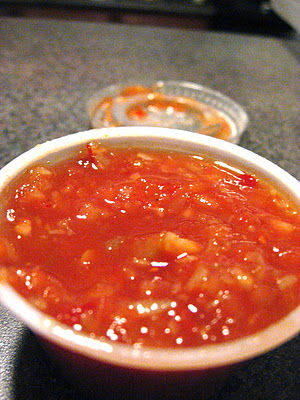 The hot sauce was not particularly spicy, though it added a nice acidity to the rich gyro and french fries.

This side of feta cost an extra $2.49.  The gentleman let me know it would be less expensive to order feta just for the sandwich, but I wanted extra to eat with my fries.

He gave me a whole half pint of feta.  The cheese was drier and extremely salty.  Eating the feta alone gave my mouth a slight salt burn, but tasted great when eaten with the fries and hot sauce. 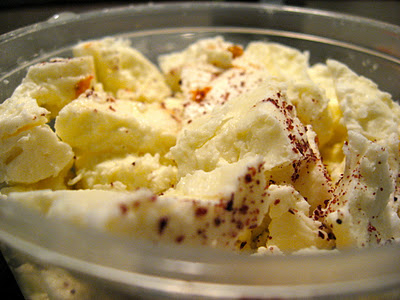 My first impression of Cafe Aladdin was friendly and acceptable and I might try them again to relieve a future gyro craving.  I would like to order some of their other menu offerings such as kufta and fried vegetables.

On two separate occasions, I have dined at Wasabi, a Japanese restaurant located downtown.

Jake and I dined at Wasabi for our first time, last weekend.

I was especially feeling homesick that evening.

To begin, Jake ordered this appetizer titled the “Heart Attack” and glass of sake. 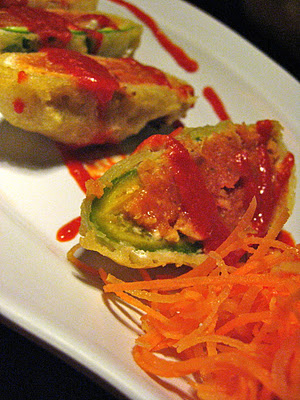 According to Wasabi, a heart attack is two, tempura battered and deep fried jalapenos stuffed with a raw tuna mixture, smeared with cream cheese, and doused in sriacha sauce.
Yes, I would order this again.  Especially for $5.  I was surprised that so much tuna was stuffed into the peppers for the low price.  The spice made me happy, even if most of it resulted from the liberal spraying of sriaracha.  This appetizer is still the spiciest food I have eaten in Fargo and I was just yearning for something to have more heat than Red Lobster’s sweet and spicy shrimp skewer.
That being said, I have mixed feelings about this appetizer.  For one, the jalapeno pepper was raw.  The deep frying did nothing to discernibly cook the raw vegetal quality of the pepper.  As much as I like srirarcha, the hot sauce was applied with a heavy hand and overwhelmed the flavor of the tuna.  Seemed kind of like a shortcut for heat, but at least it was spicy.  I could hardly find the cream cheese and the carrot garnish tasted strangely buttery.  But the main question is “would I order this again” to which I still answer, “yes.” 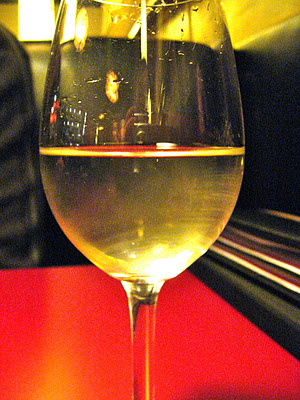 Jake’s sake arrived in a wine glass.  Which I have never seen before.  It was refreshing and smooth.  I prefer mine warm. 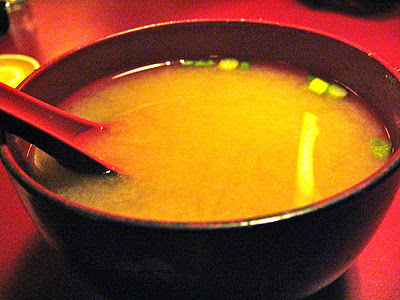 We were both served miso soup.  It was a chilly evening so I gingerly sipped the miso soup and ordered green tea.  I was provided with a small teapot, lemon, and tea bag.  The miso soup was grainy this evening, but smooth on my second visit.  On my second visit, my soup also included plenty of raw green onion slices, of which I enjoyed the flavor and bite.
For my entree, I ordered the chirashi bowl for $14.  Jake ordered the beef bulgogi, $12. 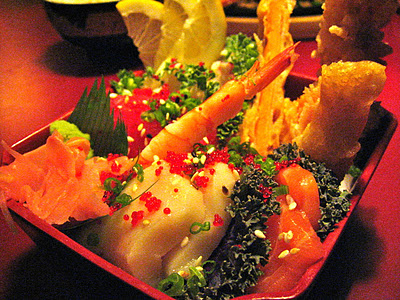 The chirashi included warm sushi rice topped with various slices of sashimi, cooked shrimp, and tempura.  The three types of fish, including tuna and salmon, tasted buttery and fresh, although the texture was a bit moist.  I’m not sure if the fish had been previously frozen and a little waterlogged.  The cooked shrimp also tasted fresh and I felt the shrimp and yam tempura were done nicely.  The batter was a bit heavy but crispy and not greasy.
In my opinion, the two slices of octopus were overly chewy and fishy, so I cast them aside.
The sushi rice was of a pleasant temperature and texture, though a bit too sweet. 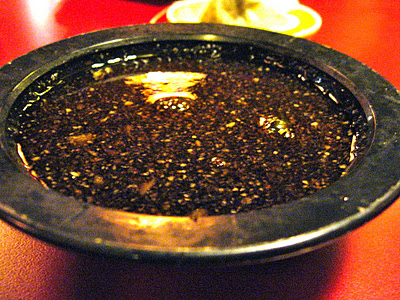 The tempura dipping sauce was sweeter than I’m used to, but edible. 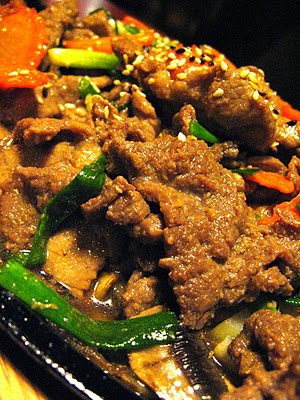 Jake’s giant platter of beef bulgogi was tasty.  It included a large amount of tender beef sauteed with green onion, mushrooms, onion, and carrot.  To me, the sauce did not taste exactly like the bulgogi marinade I have made or tried in Korean restaurant, but I enjoyed it more when I thought of it as a stir fry.  The sauce was a bit sweet and tasted of butter (again) and I noticed Jake kept dipping bites into soy sauce.  Overall, we enjoyed the dish, especially the savory pieces of beef.
The beef was accompanied by a small bowl of rice. 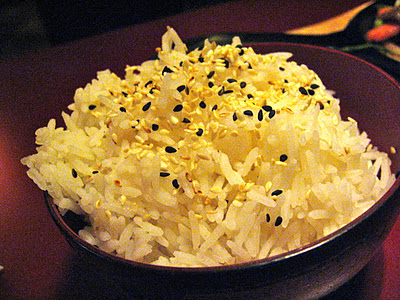 I felt a little less homesick after dining at Wasabi.  On the most recent occasion, I ordered the two roll combo for $9 and chose unagi (eel) and spicy tuna. 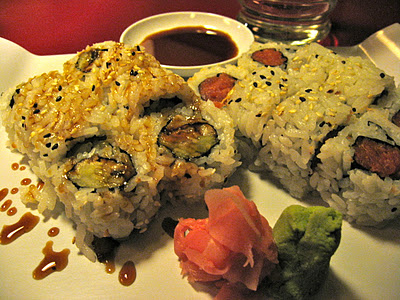 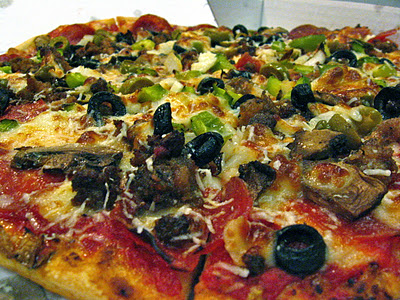 I preferred my Hawaiin supreme topped with Canadian bacon, bacon, pineapple, mango, onion, and jalapenos.
The Canadian bacon tasted like juicy, succulent shredded ham.  The sweet ingredients balanced the salty, and I was hooked on the thin slices of fresh jalapeno peppers, charred by the oven. 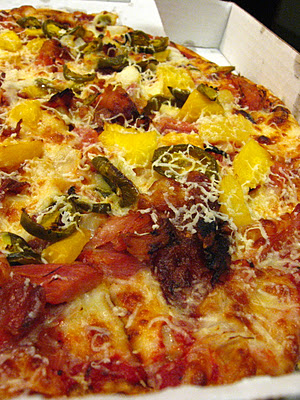 The crust had a satisfying flavor of its own.  I don’t even love the crust at Broders, which makes one of my favorite pizzas in the whole world.  But I did at Pizza Nico. 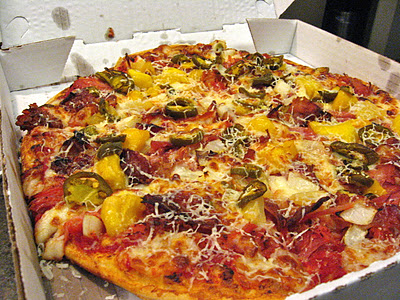 Join me next, as I share my journey through the Enchanted Highway and evening in Medora.  Jake and I also tried some selections from The Green Market’s special Day of the Dead menu which ended this weekend.

As personal side notes, I’m starting to connect with more people and look forward to learning how to cross country ski.  I’m also seeking a part-time job so feel free to throw me tips in the Fargo-Moorhead area.