Last week, I decided to drive to the badlands.  Theodore Roosevelt National Park, to be exact.

On the way, I secured a reservation at Rough Riders Hotel, a newly renovated lodge operated by the Theodore Roosevelt Medora Foundation.  Though it sounds creepy, it’s actually quite stately (the walls are obnoxiously thin, so bring earplugs).

During the drive, I enjoyed watching the terrain gradually change.  Flat, factory farmland transformed into hills and scrubby prairie brush, and slowly dissolved into canyon and buttes.

An hour from Medora, I turned south onto the Enchanted Highway.  This rolling, rural roadway is interspersed with strange, metal sculptures created by artist Gary Greff in an effort to prevent his city of Regent from becoming yet another ghost town.

I drove about half of the 32 miles of Enchanted Highway and visited three of seven statues (two were 12 miles apart).

The Enchanted Freeway is truly ethereal.  It undulates through hilly terrain covered in delicate grasses that lean with the wind.  The statues perch on top of hills and loom over nothing in particular.  Like a scared animal, I park by the statues and dart into the gusts of winds that rustle through the prairie grass.  I tiptoe around the statues feeling rattled, quickly taking pictures as if the larger-than-life sky could swallow me up at any minute. 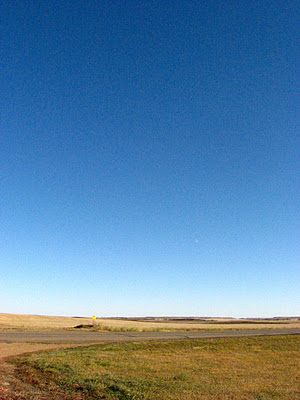 My shoes leave tell-tale scuffs in the rusty soil. 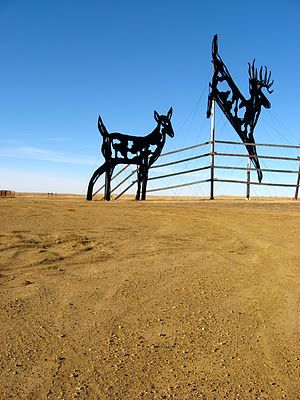 I stare through lonely picnic shelters. 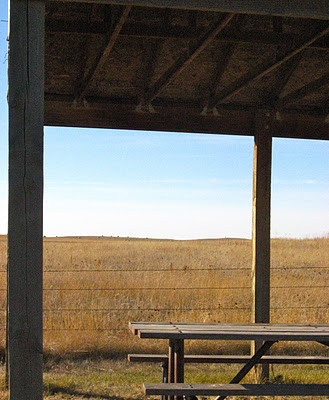 A giant grasshopper claims one hill. 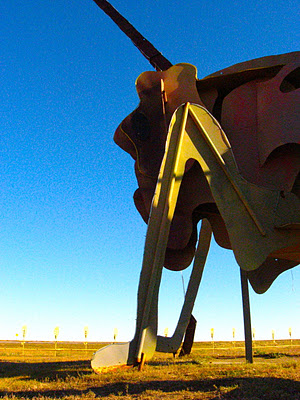 Before I turn my car around, I wander through this bizarre “Fisherman’s Dream,” weaving through iron kelp and fish that rattle in the wind. 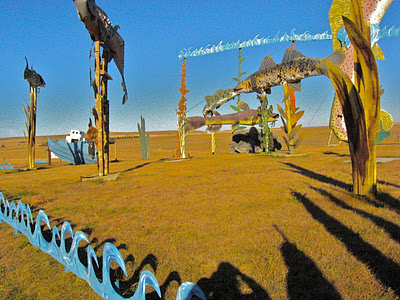 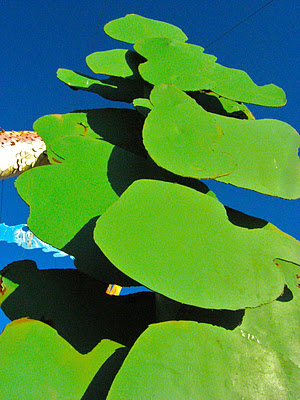 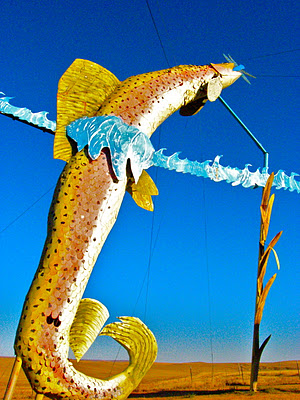 By dinnertime, I arrived at the hotel and checked in.  Medora, which is snuggled into the national park, took my breath away.  As I walked into my first room assignment, I noticed suitcases and a cooler.  I was quickly assigned a new room.

Feeling tired, I decided to dine at the hotel restaurant so I could surf the web and quickly retire to sleep.

I wasn’t compelled by any of the menu choices which were more spendy than I had anticipated but settled on the Jumbo Shrimp with Pineapple Dipping Sauce.  When offered the choice of a fried or grilled preparation, I hesitated before caving to the fried.  I ordered the cheapest glass of Merlot to take the edge off the drive, and chose a salad with the house raspberry vinaigrette and mashed sweet potato as a side.

My waiter was an amiable, young man from Indonesia who has spent many summers working in Medora. He brought a small basket of warm bread speckled with what tasted like cranberries.  The bread was a little dry and had the texture like it had been microwaved, but was tasty enough. 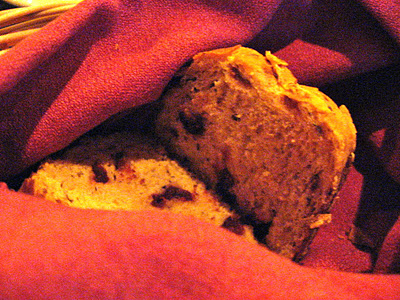 The side salad was composed of strips of romaine, crisp, garlic-scented croutons, tomato wedges, thin slices of cucumber, and grated carrot.  The vegetables were crisp and fresh and the croutons were well-seasoned.  However, I was not thrilled with the raspberry vinaigrette for the same reason I usually avoid raspberry vinaigrette.  It struck me as overly sweet and syrupy, lacking other seasoning, enough acid, or bite  After a few bites, I gave up trying to like it, and asked for ranch. 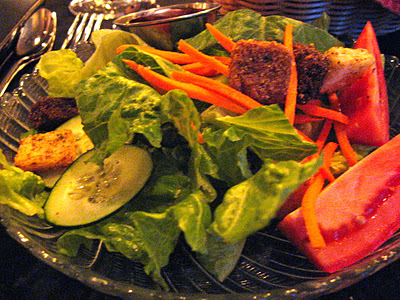 Oddly enough, I did not care for the flavor of the ranch either.  It was extremely thick and didn’t taste like a typical ranch.  I tried combining both dressings with tolerable results.  Each time I ate a a bite of salad with the raspberry vinaigrette, I’d alternate with a bite with ranch to compensate for the sweetness.  The ranch tasted off, so back and forth I’d go until I finished the salad.
After a short wait, I received my plate of jumbo shrimp.  And they were jumbo shrimp indeed. 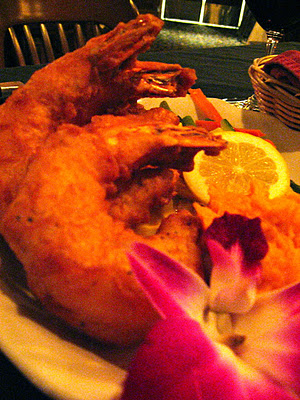 I joyously noted their size, pleasantly surprised.  Most restaurants seem to lie by offering jumbo shrimp or prawns and delivering small, generic substitutes. 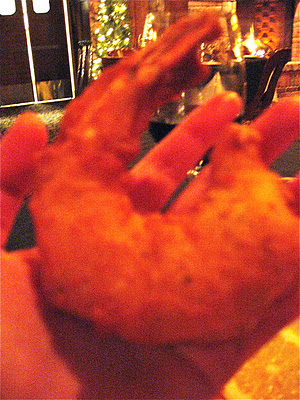 My plate contained four shrimp monstrosities, literally the size of my hand.  The batter was crispy and non-greasy and the shrimp were meaty and succulent.  They were cooked perfectly and snappy.  I expected a mediocre entree but was thrilled with these delicacies.
All of a sudden, the $31 price tag seemed a bit more palatable.
The mashed sweet potatoes were addicting.  Not too sweet and multidimensionaly savory.  The vegetables leaned mushy but tasted palatable.  The pineapple sauce was surprisingly delicious.  Tart, well portioned, and slightly spicy.
As I was chomping through my second shrimp, the waitress brought me a second glass of wine.
I sat confused until she explained the man a couple tables away bought it for me.
This has never happened, so I am rattled and unsure how to respond.
I am annoyed when the middle-aged man refuses to make eye contact with me.  Uncomfortable with the idea of a strange man watching me while I eat, I march over to his table and exclaim “Hi.  Did you buy me a glass of wine?”
Flustered, he said answers affirmatively.  I thank him and return to my table to finish my dinner.  As a lightweight, I usually don’t order more than one glass of wine so I appreciated the gesture, although it made me edgy.
Halfway through my meal, I became extremely full and struggled to finish my first glass of wine.  I asked for the rest of my meal to-go, and the kind waiter let me bring the wine back to my room.
As I walk through the lobby, I pass a man in dark hallway next to the elevator.  He says “hi,” so I reply “hi” and return the smile.  He pauses and sputters, “Oh my, you are just such a cute little thing.” Then, he stands there grinning, waiting for my response.
My jaw drops in surprise.  I feel my nose wrinkle.  He does a double take and quickly turns the corner.
I escape to my room, flip the deadbolt, and stack the furniture in front of my door.
“Blimey!”  I realize I forgot my leftover jumbo shrimp.  I call the restaurant and speak with the nice woman overseeing the dining room.  She locates my leftovers and I ask if the kitchen can hold them until breakfast, explaining I just got hit on by two men and refuse to leave my room.  As an observer, she notes she was uncomfortable with the wine transaction and kindly brings the food to my room.  We chat for a few minutes and I feel better.
Until I hear a knock at my door.  By the time I dismantle the furniture obstacle course, no one is there.
An overreaction?  Probably.  But don’t judge me until you’ve been a single, female traveler.
I left for Fargo as the sun rose, stopping by the only gas station in Medora.  The gas pump was so antiquated, I had to run inside and ask for assistance.  When I asked about coffee, the nice woman also pointed me towards breakfast sandwiches.  Though the gas was slightly higher than other towns, the breakfast sandwich and piping hot coffee were only a few dollars. 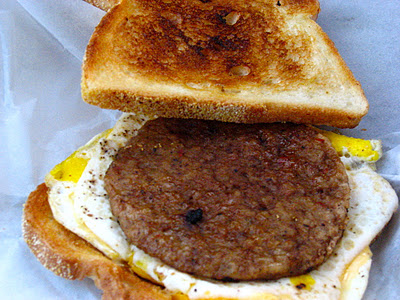 The sandwich consisted of two toasted slices of bread, a flavorful sausage patty, fried eggs, and American cheese.  A welcomed change from the mass produced, egg patty versions available frozen or at fast food restaurants.
View my favorite photos from the trip at my post Sometimes pictures are better than words.
Read about my reaction to oil activity adjacent to the badlands at There’s an oil pump in my national park!