Labneh is a Lebanese version of strained yogurt, similar to Fage.

I enjoy making this labneh dip that can be served with a variety of foods.  The Holy Land deli in Midtown Global Market sells “day old” flat breads for $1.99.  If you are like me, you have been known to eat 30 day-old bread.  I toasted Lebanese style pocket bread in a pan with olive oil, salt, pepper, and cayenne, which became delightfully crisp.

Last evening, I served this dip along with miniature, spicy samosas I heated in the oven.  This dip is also delicious when served with Kuku, an herby Persian egg bake.  I used this recipe from Chowhound. 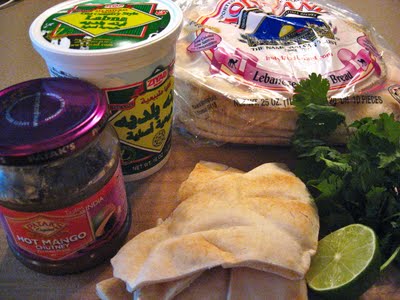