Raising Cane’s: A lowbrow story on how I bit my lip.

Raising Cane’s Chicken Fingers
7501 150th Street
Apple Valley, MN 55124
Our kitchen is back up and running
Last Friday, an individual from D & T repaired our fridge.  Fortunately, the tally for repairing both fridge and stove will be under $500.
This past month, Jake learned why he shouldn’t leave his naive girlfriend at home with the plumber.  For $300, I was told that it was impossible to re-caulk our faucet and hence, it was replaced with a faucet we can only describe as looking like a deformed smurf finger that emerged from the bowels of a Richfield Plumbing van.

As we were transporting our groceries from my dad’s house in Apple Valley to our fridge (thanks Dad!), we stopped at Raising Cane’s out of mere desperation/morbid curiosity that originated with Bill Roehl’s April 1, 2010 review. 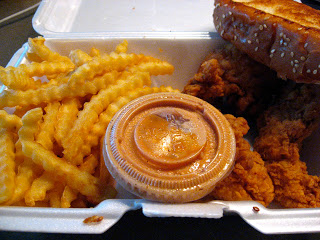 Our orders arrived immediately through the drive-through portal in styrofoam boxes.  About 10 minutes later we were home.  The french fries were dry, cold, and lacked any discernible salt.  The chicken fingers were coated in a soggy batter while the chicken was tough and stringy.  I was immediately annoyed that the take-out boxes weren’t perforated to allow for crispier chicken fingers.

I actually enjoyed the Texas toast which was crispy and greasy. Fake, butter-flavored grease squirted with each bite.  I also liked Cane’s sauce which tasted like celery salt.  Overall, the food was pretty marginal for a franchise that only serves one item.

The end
We watched Bizarre foods while eating our heavy, grease-bomb boxes, during which I stuffed my mouth with soggy chicken fingers, screamed “CHICKEN UTERUS” and subsequently bit my lip.  Not my finest moment.

This is probably a good place to end this post.