Jake and I finally made it to our city’s most famous restaurant, Northwestern Steakhouse.

When I mentioned Northwestern Steakhouse on Dara Moskowitz Grumdahl’s podcast Off The Menu while speaking to our community’s Greek culinary influence, I realized how ridiculous it was that we hadn’t dined there yet. This restaurant’s served the community since 1920, opening soon after the first Greek immigrants settled in Mason City. The current owners Bill and Ann Papouchis took over the business from Tony’s father in 1965. Northwestern’s housed in a unique building across from baseball fields that blends in with its residential neighbors on the north side of town. You might miss the restaurant if you weren’t looking for it or the people waiting outside for tables didn’t give it away.

Upon moving to Mason City, we’ve heard legendary tales about Northwestern’s Greek-style steaks and spaghetti. Northwestern steaks are distinguished by their tenderness and the magic sauce that forms when the Greek seasoning mixes with the steak juices, olive oil, and butter. My friend Debbie published a copycat recipe that went viral last year.

Northwestern has a reservation system similar to Broders’ Pasta Bar which means that, basically, you can’t make one. Diners can arrive before 5 p.m. and hope to secured a table or call at 5 p.m. to put their name on the seating list. If your party is composed of at least six people, it’s possible to make a reservation. During our first winter in North Iowa, we naively arrived at Northwestern Steakhouse with out-of-town friends on a Saturday evening at seven p.m. We figured that on a sub-zero, snowy evening after prime dinner hour, we’d waltz right in and were totally wrong. The place was packed for the evening. You might be able to show up closer to five p.m. on a rainy day or weeknight (or a rainy weeknight!).

On this Saturday evening, we were determined to secure a 5 p.m seating so we arrived an hour early. Ann warmly greeted us at the door and gave a card with a number that corresponded to our table. People continued to arrive, so we wouldn’t have wanted to show up much later. The good news is that you can wait in the lounge upstairs until your table is ready. We passed the hour by playing cards and enjoying a beverage from the bar. Northwestern provides a deck of cards on each lounge table and servers take beverage orders.

At 5 p.m. our server guided us to our table. The menu’s concise and so it didn’t take long to choose our meals. Obviously steak is the restaurant’s namesake, but diners can also find items like roasted chicken and fish. We chose ribeyes, our favorite cuts with the Greek spaghetti as a side. Meals also come with tossed salads and bread plate.

The tossed salad was composed of crisp iceberg lettuce and garnished with tomato, pickle, hardboiled egg and an olive. I was satisfied with my upgrade to gorgonzola dressing which contained small chunks of blue cheese. Jake’s Greek salad was dressed in a very light oil and vinegar-like dressing.

And then there were the steaks. Our ribeyes were as big as our plates and shimmered with the flavorful butter/steak juice mixture.

The steaks were tender and cooked to a perfect medium rare and the fat melted in my mouth. Each time I’ve ordered a steak, the kitchen always cooks it north of medium rare, but this was truly the best cooked steak I’ve ever eaten. Jake ranked it in his top two favorites, alongside Ruth Chris’s (which are cooked differently). When I first studied Debbie’s copycat recipe, I was puzzled by her addition of chicken bouillon but now I understand she was trying to replicate the intensely salty, savory bite of the sauce.

When people mention Northwest Steakhouse, they mention the spaghetti side as often as the steak. This spaghetti isn’t coated in a tomato sauce, but steak juice and parmesan cheese. I wish I had followed the advice of a reader who had suggested we also drizzle the steak juice from our plates onto the spaghetti.

As we approach our move from North Iowa, I will treasure the evening we got to dine at Northwestern. Considering the quality of our meals and size of the steaks, prices are affordable for a steakhouse. Our ribeyes cost around $20 and came with the bread plate, tossed salads, and spaghetti side. My ribeye provided enough food for two leftover meals.

Northwestern is certainly a beloved institution and conversation topic that sparks intense debate among North Iowans about who serves the best steak. There are the die-hard Northwestern Steakhouse fans and those who prefer other local steaks. We’ve tried a couple of our friends’ suggestions, and, while they tasted delicious, Northwestern is our favorite. We left the steakhouse feeling somewhat hyped up on the excited from finally dining at the restaurant, and from how much fun we had that evening. We felt the steaks were totally worth the wait. Sure, you might have to plan ahead to dine here, but sometimes it’s nice to slow down; to play some cards, drink a beer, and make an evening out of a nice meal.

Highs and Lows at Basies

On date night, we got in a fight about Chili’s.

When I get hungry, I get mad. For as long as I can remember, anger and hunger have always walked hand in hand. The whole world splinters into obstacles that stand between me and food. And all I can think is “why are you preventing me from eating?”

We headed towards the West Acres mall with Jake fuming behind the wheel. As we drove past the  usual chain restaurants, we observed full parking lots and people waiting for tables on benches outside in the cold. I didn’t want to pick the restaurant until he started veering towards Chili’s. Then I started to care.

I really didn’t want to eat at Chili’s. I’ve only been there twice. The first time was bad while the second time was fine, albeit completely deep fried. I whined and pouted. I threatened to walk to a different restaurant. Jake was just hungry. He used to eat at Chili’s with his family growing up and thought I was entering food snob territory. Then, we both felt bad and he veered into Basies Restaurant and Lounge. I’m still now sure how we went from Chili’s to Basies, but at least we were seated immediately.

Basies is located in the Ramada Plaza Hotel. Jake once enjoyed a meal here with coworkers. At first glance, the restaurant’s appeared banquet hall-ish and a live band was performing a mix of country, blue grass and lounge music. The music was loud, but just short of drowning out conversation.

We don’t frequently dine at restaurants that sell food a la carte. This is why I agonized over my dinner selection and became stuck between an $8 salad or a $7 vegetable side. All I wanted was some protein and a small side of vegetables. There weren’t many options that combined both, besides pasta, a dinner salad or a three course meal that included a dessert I didn’t particularly want. I ordered the appetizer of bacon wrapped scallops, $15, with the side of asparagus and Hollandaise sauce, $7. Jake chose the three course dinner option, $48, that included his choice of a house salad, an entree of fillet mignon with asparagus and mashed potatoes, and his choice of dessert, creme brulee. 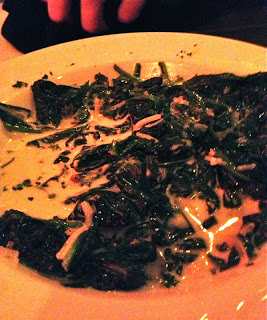 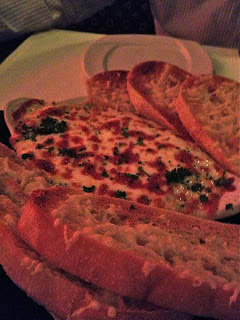 The large ramekin of dip was served with plenty of grilled bread. The flavor of the dip tasted well-balanced, even with the melted cheese, and we enjoyed it’s slight kick of heat.

Our server walked by with a bowl of creamed spinach. He said there was a kitchen mix-up and asked if we wanted it for free, adding he hated wasting food. We gladly accepted.  I’ve never eaten traditional steakhouse creamed spinach and this version seemed a little different. It was more like sauteed spinach in cream, rather than the thicker, casserole-like variety. I often saute spinach like this at home, so I enjoyed the dish. It was nicely seasoned and the cream tasted of garlic, though I could have done with less of the sauce. Still, it was free and generous of our server to offer it to us.

After the dip, our server brought us a bread basket. The warm rolls were crusty and came with honey butter. We didn’t dig too deeply into the basket so we could leave room for the entrees. 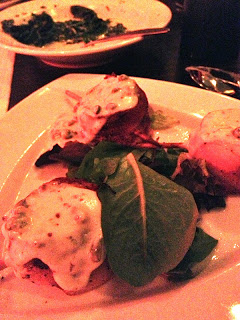 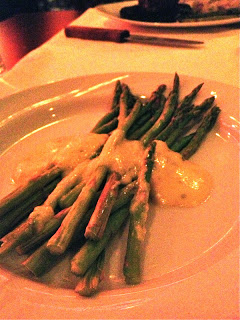 My scallops were large and tasted fresh. They were cooked nicely and free of grit. I scraped most of the mustard-caper sauce from the scallops. It didn’t taste bad, but struck me as heavy and I really just wanted to taste the scallops.

I also scraped most of the Hollandaise sauce from the asparagus. Again, it wasn’t that the sauce tasted bad, but it just seemed too rich. Between the artichoke dip, creamed spinach, and creamy sauce on the scallops, I had reached my threshold.  I yearned for some lemon. As lovely as our server was, we didn’t see him for a while after he brought the entrees.

The asparagus spears may have been steamed. The were a little dry, unseasoned, and the bottom of the stems were woody. On the other hand, Jake’s asparagus fared much better. 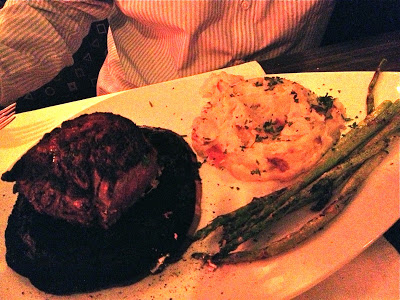 The asparagus spears accompanying his steak were seasoned, lightly grilled, and free of woody stems.

His steak was cooked to the requested medium rare. It was tender, nicely seasoned, and scented by the cedar plank on which it sat. We really enjoyed the garlicky mashed potatoes which struck a nice balance in texture and seasoning.

The creme brulee struck me as odd. 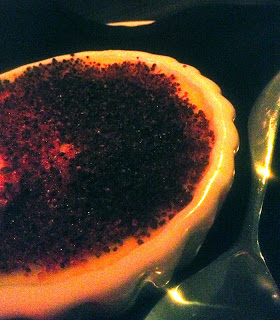 Our server asked if we would like the bottom of the creme brulee heated or cool. He also offered us a choice of plain, raspberry, lime, or blueberry-flavored sugars to be bruleed table side. We chose half plain and half raspberry.
After he bruleed the ramekin with a tiny torch, the sugar still glowed. I wasn’t sure if we were supposed to let the sugar continue to burn. I blew them out and extinguished the rest of the glowing embers with my finger tip. Unfortunately, the sugar didn’t exactly melt. One of the best parts of eating creme brulee is cracking the thin, glassy sheet of sugar that forms after it’s torched. The sugar on this creme brulee was too course to melt. It remained in crunchy, burnt granules. The custard didn’t taste bad, but its texture was firmer than I like.
In summary, the dinner ranged from hits to misses. The artichoke satisfied any guilty pleasure cravings, and Basies can clearly cook a steak.
The service was pleasant and the live music was fun. Between sets, the band sat down to enjoy dinner with who appeared to be their families. I wouldn’t turn down an invitation to return to Basies, especially on someone else’s dime, though I wouldn’t rush back for dinner. However, it could be a pleasant spot to enjoy live music, spend a happy hour, or share appetizers.