The North Iowa farmers markets are open again and I spy rhubarb, so summer may begin now.

Unlike the Twin Cities, we don’t have a farmers market in every neighborhood, but I’m happy we have one in town. The Mason City farmers market isn’t large and there aren’t food trucks or anything, but I can at least buy fresh vegetables and fruits, plus extra treats like bread, jam, and bags of puppy chow mix.

There’s also a vendor that sells grilled brats with the typical fixings of sauerkraut, onion, ketchup, and mustard. This is a simple pleasure that never gets old. I rarely turn down street meat.

On my last two visits, I rejoiced over this summer’s first bounty of rhubarb like the good Midwesterner that I am.

We never cooked with rhubarb growing-up. Nobody in our neighborhood grew it and I think they considered it like a weed. Jake remembers picking it as a child and eating the tart stalks dipped in sugar. As an adult, I’ve become taken with rhubarb. I love how it retains some tartness when cooked and balances out sweet desserts. The complexity of its unique flavor strikes me as both fruity and floral.

I asked friends for their favorite rhubarb recipes, but chose this cake because I had all of the ingredients in my kitchen. I found variations of this recipe in nearly all of my cookbooks, so, where it truly originates, I do not know. This cake is very simple to prepare and light and fluffy like a muffin. It reminded us so much of muffins, that I poured the batter into muffin tins the second time I made it.

This cake will be an ol’ reliable for us. Now I’m moving on to trying everyone’s favorite rhubarb recipes.

Cook’s Notes: The original recipe calls for 1 1/2 cups of white or brown sugar. I used both, but in lesser amounts. The original recipe also calls for buttermilk, which I did not have. It says you can substitute one cup of regular milk + one tablespoon of lemon juice for buttermilk. In my first cake, I used 2/3 almond milk + 1/3 cup sour cream. In my muffins, I used only almond milk. I think you can use whatever you have, though the sour cream adds extra moistness. If you’d like to bake muffins, reduce the cooking time. Mini muffins took about 10 minutes. The cakes are done when you can cleanly remove a toothpick from the center.

I spend my mornings in salad lab. Those who arrive earlier rather than later get to pick first from the daily production sheet which specifies what is to be made and in what quantities. Second-year students take turns determining the school’s weekly breakfast and lunch menus. Some of our tasks remain the same each day, while recipes for salads and sandwiches vary. During the first two weeks, everyone attended classes, and we were practically fighting over responsibilities. Time has seemed to separate the wheat from the chaff. We’re noticing who attends class regularly and who pulls their own weight, thus developing a mutual respect.

I find it humorous and horrifying that our ServSafe textbook for the sanitation certification course has to specifically instruct that one should not vomit into food.

During the first week of class, I carelessly left my favorite knife in the kitchen and found it had disappeared upon my return. I sounded off a knife-alert that remained unanswered, despite the fact that it had been engraved with my initials.  Yesterday, I was reunited with my Santoku when I found one at an unattended work station. I cleaned the knife with the intention of putting it back where I found it, until I noticed my initials. They were unmistakably carved into the knife and, hence, I reclaimed it as its rightful owner. I still have no idea whose work station it was. And, though, I want to give that individual the benefit of the doubt, I can’t. For no one mentioned a single word about missing a knife. Plus, they let it develop some water stains. Lesson learned. I will never lose sight of my knives.

This week, I attended my first food show.  As students, we were assigned to attend the Food Services of America Food Show. Nothing could prepare me for the abundance of food samples. Whole slices of pizza. Silver platters of fried shrimp of all sizes. Fried chicken strips.  Chicken nuggets, chicken poppers, and tempura chicken bites. Whole breakfast sandwiches, pancakes, macaroni and cheeses.  And then there were the desserts. I passed on pre-made cookies, slices of pie, and cakes. The food show managers were gracious to allow students to attend, though the vendors paid us little mind. They were more interested in peddling their wares to potential customers. I indulged in a peach slushy and found solace in the beer/wine garden.

On a final culinary school note, our two instructors are like super people. They arrive at school well before we show up at 6:45 a.m. They supervise at least six kitchen lab groups, simultaneously. After clean-up, they roll right into lectures and somehow manage to be interesting and engaging. They act like they love their job and genuinely care about the well-being of their students. On days when kitchen mishaps abound, they proceed with kindness and a sense of humor.  They demonstrate patience to seemingly no end, though they are sticklers about personal hygiene and not bashful about asking students to re-do sloppy plate presentations or dishes that just don’t taste quite right.

Last week, one of the culinary instructors shared bucketfuls of apples from his backyard. I took as many as I could carry and daydreamed about creating fall apple desserts when I was supposed to be paying attention in class. One of the cookbooks I salvaged from my late mother’s collection revolves around apples. I’ve been waiting to explore this spiral-bound church cookbook since I brought it home this past summer. Although the book contains recipes of popular, apple-centric recipes like pies and cakes, it also contains the less familiar such as apple custards, puddings, candies, and the following, apple cream. 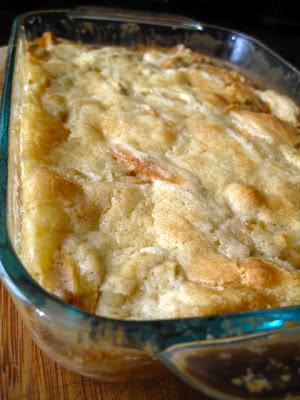 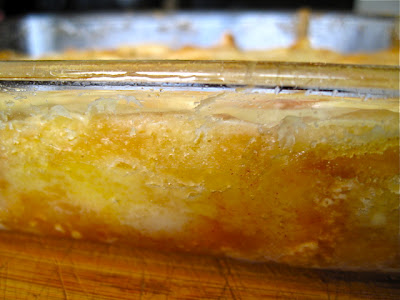 The top layer becomes fluffy like cake and tastes a little bit like custard.  I suppose you could serve it with ice cream or whipped cream, but we were satisfied scraping it directly from pan to bowl. 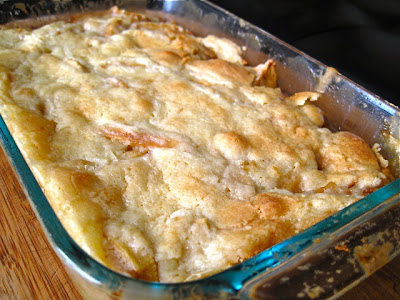 I haven’t typically been fond of melons.

More specifically, honey dew melons or anything that resembles cantaloupe.

As a post-college adult, I was surprised to find melons at the local Twin Cities farmers markets.  I must had thought they were exotic fruits grown from afar.  One summer, I visited a specialty melon stand at the Minneapolis Farmers market, investing in an unusual variety that originated in Jerusalem.  When I brought the melon home, I carefully opened it and took my first bite.

Despite my aversion to cantaloupe, I am fond of the little melons appear in our CSA boxes.  I’ve learned that I can palate cantaloupe one of two ways: Covered in lime, chili, and salt, or blended into a pulp and mixed with seltzer water and vodka.  This weekend I wondered if melon could be incorporated into a cake.  After all, there seems there is a cake recipe for every other fruit or vegetable, including tomatoes, beets, and zuchinni.

With a firm, salmon-colored watermelon in hand, I tinkered with Laurie Todd’s recipe for Melon Cake with Citrus Glaze, published in Vegetable Gardener. 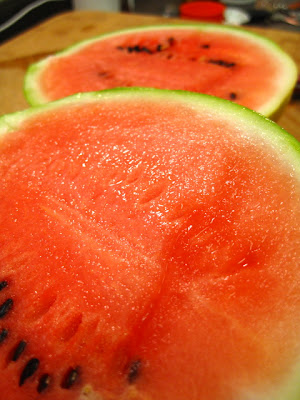 The pureed watermelon adds a subtle sweetness and rosy hue.  It’s flavor is more discernible in the batter than the cooked cake.  Other melons may lend a stronger flavor.  I made my glaze with grapefruit juice, but you could use whatever citrus fruit you have on hand. 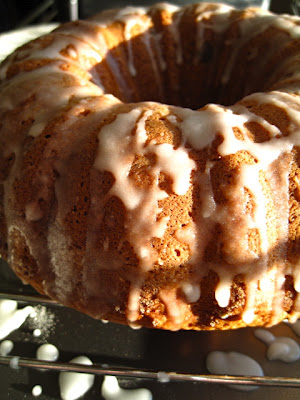 In a medium-sized bowl, sift together flour, baking powder, baking soda, and salt.

In a large bowl, cream the sugar and butter until smooth.  Add the eggs, one at a time.  Stir in vanilla extract.

Fold the dry ingredients into the butter and eggs mixture, in two parts.  Alternate with the pureed melon.

Sprinkle in chocolate chips. I used about 1/4 bag.

Scoop batter evenly into a pre-greased and floured bundt pan.

Bake for about 45-50 minutes, or until a toothpick can be cleanly removed from the cake.

Allow the cake to cool for about 15 minutes.  Remove from pan to cool.

To make the glaze, mix powdered sugar with grapefruit juice (I used about 3/4 cup powdered sugar and a few tablespoons of juice).  Add a small dab of butter and pinch of salt.  Slightly heat the glaze to melt the butter.  Glaze cake when cooled.