I learn the most from cooking with others.

Pre-Jake, I lived with two lovely ladies in a cozy home in North Minneapolis, near Theodore Wirth Park.

My housemate Chelsea inspired me with her cooking and shared her favorite cookbook, Extending The Table.  Her favorite recipe from this cookbook, by far, was Kushari, an Egyptian dish of rice and lentils topped with a tomato sauce which she used to make for her Lutheran Volunteer Core housemates.

I’m not sure how authentic our version of Kushari is, but I find it addicting despite its simplicity. Most recipes call for the addition of pasta, but I prefer lentils and rice.

Cook’s Notes
I bought organic, French green lentils in bulk from Cash Wise. If you’d like extra protein, you could serve this meal with a piece of fish, sausage, grilled chicken, or even some type of cheese like cubes of creamy, French goat milk feta.

I could not remember the ratio of water to rice/lentils and referred to Miss Anthropist’s Kitchen post, Kuhsari (Egyptian Meal). 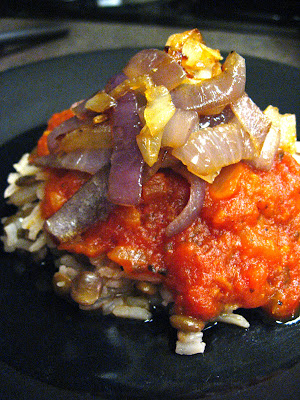 Chopped onion, about 1/2 or more to taste
Salt
Pepper
1 large can of tomatoes or jar of tomato sauce (about 12-14 oz.  If using whole tomatoes, break them up by hand or blender)
Cumin
Splash of red wine vinegar
Dash of sugar
Hot pepper, flakes, or finely chopped fresh chili of choice
Garlic

The Assembly
Top the rice and lentils with sauce and sprinkle with the caramelized onions.

A man enthusiastically greeted me at the St. Mary’s Orthodox Church’s Coptic Festival this weekend.

Two of my friends graciously joined me for one of my summer cultural festival adventures at the St. Mary’s celebration of their Egyptian heritage in South St. Paul.

This year, I discovered there was a West Saint Paul and today, I learned there is a South St. Paul.

The festival had attracted a significant number of attendees, Egyptian and non-Egyptian alike.  Besides our initial strange, yet enthusiastic greeting, the community went out of their way to welcome us, point us in the right directions, and assist us.  This church community demonstrated a lot of pride in their heritage and were excited to share with others.

I started my afternoon out with a cup of freshly blended watermelon juice.  We took a tour of the unique sanctuary and learned about Coptic Orthodox religious traditions.  The church had also set up a pictorial display explaining Egypt’s recent overthrow of Mubarak.

We make a bee-line for the outdoor grill and order kafta sandwiches. 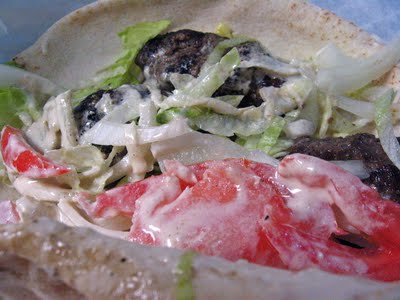 I’ve eaten mediocre festival food and mediocre kafta on several occasions.  However, this kafta sandwich was pretty much amazing. 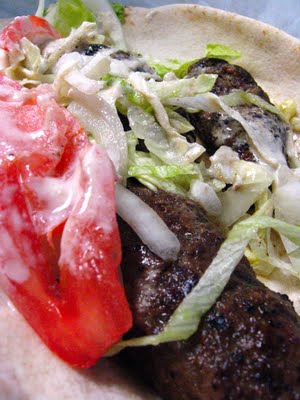 The bread was thinner than a typical pita but firm enough to remain intact.  The sandwich contained about four pieces of grilled kafta, a ground and spiced meat, that was succulent.  The kafta was moist and a couple pieces even revealed tinge of pink.  The sandwich was garnished with shredded lettuce, tomatoes, slices of white onion, and a refreshing and creamy tahini sauce.

In the basement was a bake sale.  I had my eye on homemade loaves of meshaltet, a “flaky buttered bread” and spicy cheese/yogurt spread.  Unfortunately I ran out of tickets to purchase these delicacies and am now kicking myself for not just splurging.  I thought, why not save 10 dollars and just figure out how to make meshaltet at home?  When I got home, I looked up recipes for meshaltet and understood why the loaves cost $10. 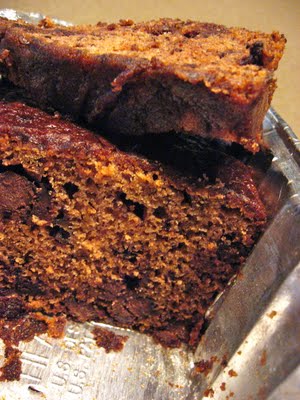 I did buy this wonderful loaf of banana chocolate chip bread.

Jeni’s food festival rules:  Ethnic food festivals at churches serve the best food.  If it looks good, buy it.  You could even buy extra to bring home and freeze because often times, church members make delicacies that are not sold in stores.  Linger and talk to people.  Watch the talent shows, read the displays, take the tours.  What may initially seem boring or cheesy could be one of the most interesting or informative experiences you didn’t realize you could have.