I was provided with lunch at the Lou Malnati’s Pizzeria to facilitate my review. All thoughts are 100% honest and my own.

Welcome back to the fifth part of my six-part series about traveling to Chicago with the North Iowa Bloggers and the Clear Lake Chamber. This post is about that iconic Chicago food known as deep dish pizza.

This trip also marked my sixth visit to Chicagoland. Upon my first visit to Chicago with my family in grade school, our relatives advised us to order deep dish pizza at Gino’s East. Not just any Gino,s either, but the Gino’s East location on Well’s Street. For a suburban, Twin Cities kid, Chicago deep dish pizza tasted utterly fascinating. We were intrigued by our sausage pizza which came with an entire layer of sausage, and its rich, yellow crust.

Lou Malnati’s invited us to enjoy a meal during our trip, so we stopped by their River North location for an early lunch after touring the Skydeck glass ledges (I wrote about my experience here). I asked my cousin, a Chicago resident, about his thoughts on Lou Malnati’s and replied that out of the big Chicago deep dish chains, he prefers Lou’s.

A hostess led us upstairs to a large table in a corner nook and our server Jason greeted us warmly. He was obviously a seasoned employee who knew the menu inside and out and kept up with our banter. After examining the menu, we chose our own deep dish pizzas in the “personal” size and one group member added the Trio of Dips With Pizza Chips appetizer to share. Since so many of us ordered a side salad, Jason recommended a family-sized house salad instead.

I had planned to order my own side salad and felt apprehensive about sharing because I wanted to eat a lot of salad and not feel bad about taking too much. We’ve all been in those situations where someone asks us to share or split something and you oblige even though you totally want to eat your own. Eating enough fruits and vegetables on trips is challenging. When I’m away from home, I realize how off-balanced my body feels when I don’t eat as many vegetables as I do from cooking my own meals.

Jason was right. The large house salad was huge and provided more than enough for all eight people. I even went back for seconds. He brought us ramekins of four salad dressings including red wine vinaigrette, creamy lemon garlic, gorgonzola and ranch. The group’s favorite was the creamy lemon garlic which they sell by the bottle. I thought the red wine vinaigrette was especially well-balanced.

I wanted to leave room for the pizza, so I just took a small taste of each dip. If I hadn’t anticipated a plane ride later that day, I would have polished off the roasted garlic. I was pleasantly surprised to find that it tasted like pure, roasted garlic puree.

In writing this post, I learned that Gino’s pizza crust does not actually get its golden hue from cornmeal, but yellow food coloring and corn oil. Lou Malnati’s advertises a signature Buttercrust. Some Lou’s prepares some of their pizza combinations on Buttercrusts, you can upgrade their regular deep dish to a Buttercrust for $0.75.

In 2004, Eater Chicago wrote a feature on Lou Malnati’s and interviewed Lou Malnati’s son Marc Malnati. Malnati shares how their recipe for dough has remained the same 42 years. Each batch of Buttercrust is fermented for 48-hours and really does contain butter. Other interesting facts I learned from this Eater feature is that the restaurant makes the sausage from lean pork without fennel (since Malnati feels fennel is overpowering), and sends staff to California each year to personally approve which tomato harvests will be picked and canned.

Donna ordered a gluten-free personal-sized pizza with a sausage crust (Lou Malnati’s also offers gluten-free thin crusts). Like Gino’s East, Lou Malnati’s sausage is above average. It’s the complete opposite of those sausage pellets we find so often on cheap pizzas. While I enjoyed the flavor of this gluten-free pizza, I don’t think I could eat more than once slice during a meal.

All in all, Lou Malnati’s serves a craveable deep dish pizza in a crust that tastes lighter and more crisp than it appears. I also learned that spicy giardiniera is my ideal pizza topping, which is inconvenient given that I’ve never seen it offered anywhere that I’ve lived. Spicy giardiniera looks like it’s easy to prepare, so I’ll have to whip up a batch before I make my next batch of pizzas at home. Lou Malnati’s did provide us with a gift certificate, but I examined the prices and found them to be reasonable. My personal pizza with two toppings costs about $9 before tax and tip and provided enough for a leftover slice. The family house salad costs $10.85 and fed our group of eight with leftovers.

Touristy or not, Chicago deep dish pizza is delicious. We can’t find it in North Iowa, so I’m looking forward to trying Laura’s recipe for deep dish which is flecked with cornmeal.  On this weekday, the restaurant was packed with local business people and tourists, alike.

Thank you Lou Malnati’s for treating us to lunch & a cookie pizza and to Jason for providing excellent service to our big, loud, enthusiastic group. 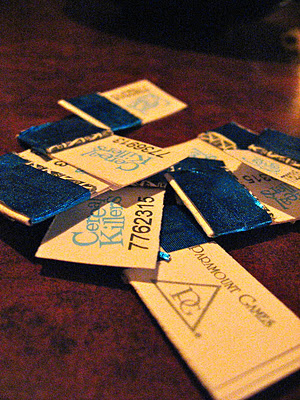 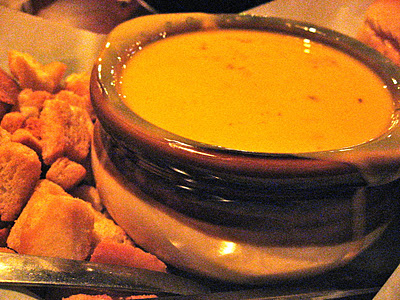 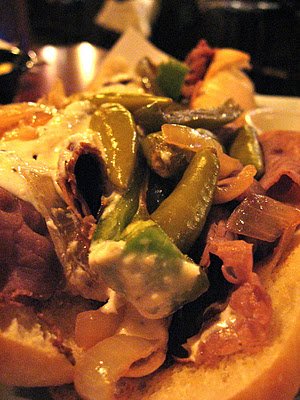 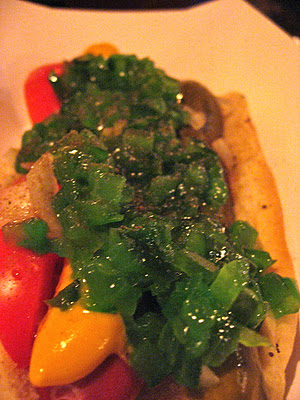