Celebrating The Small Victories: A Dog In Boots

If this isn’t success, then I don’t want to live on this planet anymore. 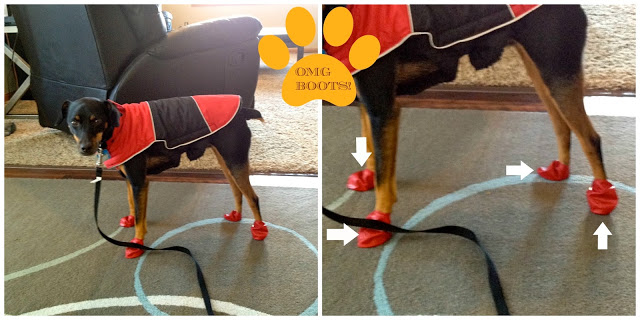 A few weeks ago, I wrote a post about how my dog wouldn’t wear boots.
The weather had begun to sour and the roads were covered in snow and slush. If we were going to make it through the winter, he just had to wear his boots. I tried a puffy pair of boots from Petco and rubbery Pawz without success. Once I slipped a boot on his foot, he’d alternate between keeping that leg raised up in the air or attacking his foot. I thought all was lost.
Yesterday, I tried again.
After a handful of treats, I got the dog to wear all FOUR boots. We made it to the end of our cul-de-sac.

Trayse was so unhappy with his boots that he kept throwing himself, head-first, into every snowbank we passed.

This continued the entire block and a half home. His feet were nice and dry but his jacket was packed with snow. But, no matter.  Four boots a small victory that I’ll take.

Now, if only I could replicate it!