One evening, Jake brought home the remnants of a happy hour’s past.  I tasted a few bites of fried pickles.  These weren’t the more common version of soggy fried pickles chips that are either too greasy or dropping their batter, but tart pickle spears and cheese wrapped in an eggroll wrapper.  Even though the leftovers were aged an unknown number of hours, I enjoyed the tart pickle spear and the crispy eggroll wrapper that kept everything snug.

Jake also bought me a small salad, which I decided to pack for lunch the next morning.

As I was whirling in my usual tornado the next morning, I grabbed a small takeout box from the fridge.  When I arrived at work, I noticed a strong smell, and felt glop pooled in the bottom of my bag.  I had grabbed the box of appetizers instead of the salad, and the uncovered cups of side sauces had tipped, creating a fragrant mess.

To replace our Friday evening snacks, we placed a takeout order at Labby’s for fried pickles, $7.99 and “Asian Bombs,” $9.99.

Our journey to Fargo has included many “What’s a _____?” questions.  Jake had asked “What’s a Hornbachers?” on our first day in Fargo.  Hence, it has become a sort of inside joke, for better or for worse (i.e. “What’s a Taco Shop?”).
*For my Twin Cities readers, Hornbachers is Fargo-Moorhead’s major grocery store chain, comparable to Cub Foods.  We chuckled at the major grocery chain’s name of Hornbachers, but realized that the name Kowalski’s wasn’t, particularly, more user friendly .
Labby’s is down the street from our residence and I have often wondered “What’s a Labby’s?”  Is it Labby’s, as in Abby’s?  What sort of mysterious bar-slash-family restaurant hybrid lurks within our walking distance strip mall and what exactly is a Labby?
On closer examination, I noticed the windows were decorated with dogs.  But, of course. I should have known.  My favorite kind of labby.
The interior screamed sports bar, was surprisingly spacious, and bustled with customers.  It was one of those surreal experiences where the outsides do not match one’s visual expectations for the insides.  Kind of like The Lion, Witch, and the Wardrobe, but not quite as cool.  And lacking fauns. 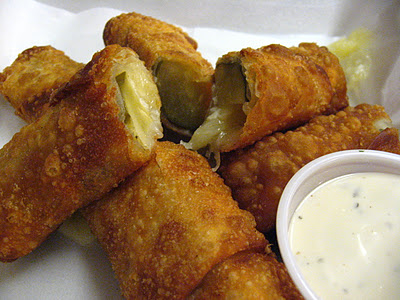 Again, I enjoyed Labby’s version of a fried pickle, which I have not seen in the Twin Cities.  The pickle spear was perfectly tart and sour, which offset the richness of the cheese, crispy wrapper, and creamy ranch.  As much as I like this fried pickle concept, it left me fantasizing about a version made with cream cheese. 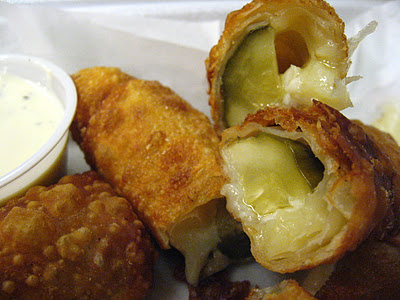 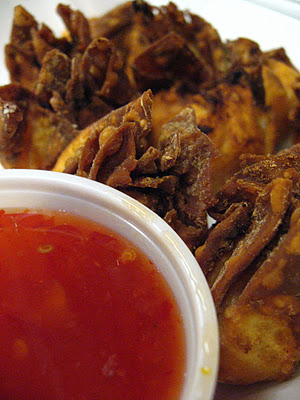 Labby’s Asian Bomb tasted like a wonton wrapper filled with a moist chicken mixture, seasoned with sweet chili sauce, and hot pepper.  I don’t know what kind of pepper it was, but it appeared to be of a green variety. 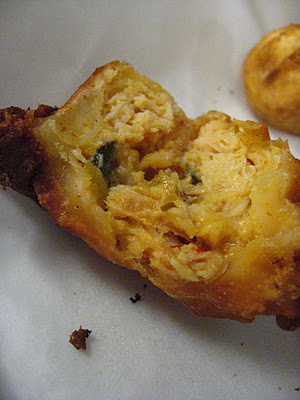 The Asian Bombs were fine and I enjoyed the small kick, but felt the flavor of the sweet chili sauce in the filling, combined with the accompanying dipping sauce was redundant.

Not bad, not something I’d crave enough to pay $9.99 for again, but they tasted fine and were fried well. Both items were fried well, as they were crispy and lacked greasiness.  Fried goodies worth considering for a conveniently located happy hour and pleasant atmosphere.

On the way home, we stopped inside Labby’s adjacent CherryBerry neighbor.  If I am not mistaken, CherryBerry is located at the Mall of America.

A fan of occasionally indulging in tart, Korean-style frozen yogurt, I nearly wet my pants when I took in the self-serve set-up in all it’s glory.  Jake and I parted ways to adorn our own yogurt creations.  Who needs the Rorschach or TEMAS when there’s CherryBerry?

Jake took one look at my CherryBerry and guffawed.  Before this half-eaten photo was taken, his CherryBerry was deliberately constructed according to an elaborate strawberry/chocolate scheme with flavor, color, and architectural sub-schemes.  And it was delicious. 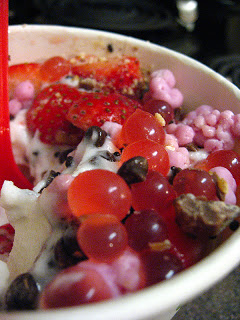 My CherryBerry was much less organized.  There was no construction plan and my inner dialogue was more like “Ooo, tangerine!  Those are pretty.  I like fruit.  Shiny mango orbs!”  I strongly preferred the plain, tart yogurt over the puckery pomegranate variety and the fluorescent tangerine, which tasted like the smell of a Lipsmacker. 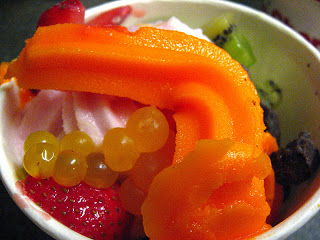 The orbs of mango and strawberry gel provided tasty splashage, but more is not always better.  Next time, I will stick to my tried and true combination of one or two fresh fruits and chocolate chips (and mochi, if they had it).

At least I am now aware of our dangerously, easy access to Korean-style frozen yogurt and fried pickles.