Homesick, chasing ghost towns, and the most perfect rhubarb pie.

I miss having the familiarity of people who know me.  Knowing where I am going.  The lakes and the trees.  The buzz of the city and sidewalks of Uptown.  I miss the cozy neighborhoods and dogwalkers.  I loathe the cold winds and am perplexed by the urban sprawl.  And though the people I meet are lovely and kind, I think I just miss home.

Almost three years ago, my mom died following Thanksgiving.  I had embarked on an 11-day trip to southern China and found out she had fallen into a coma soon after I arrived in Qinzhou.  Flights were booked and the only available seat cost $8,000.  So I stayed, heartsick and nauseous while my friends cared for me.  The journey home took about two days, during which I was unsure if my mom was still dead or alive.  She remained in her coma for a few days after I returned home and then quietly passed away during a still moment when we all stepped out of the room for just a minute.

Even though I run from the grief, my body still remembers this time of year.

And so I developed a severe case of wanderlust.  I’ve made it to one of the most northern and unpopulated states in the country.  Scratch that.  I’ve moved to the cold, windy prairie land and since I’m already this far north, I might as well explore.

Earlier, I had run across the website Ghosts of North Dakota.  Fascinated, I clicked on one town after another, transfixed by the photographers stories, haunting imagery, and memories left by individuals who expressed warm connection to the remaining, weather-worn shells of homes.

I was drawn to the town of Fredonia.  Not only were the images striking, but the passion of one commenter who mentioned her husband was the pastor of the pictured church.  She was angry that her town was considered a “ghost town,” and attempted to explain that Fredonia is indeed inhabited.  She and another individual mentioned Fredonia’s Home Plate Cafe, arguing the cafe is one of the best kept secrets in North Dakota that serves a special German menu on Fridays.

The only information I could find on Home Plate Cafe was a brief review on Tripadvisor, describing warm hospitality, homemade pie, lunch specials, and the special German menu on Fridays.

The next morning, I set off in search of the not-so vacant ghost town of Fredonia; lukewarm French Vanilla coffee in my cup holder and a crappy gas station breakfast sandwich beside me.

During my first couple weeks in Fargo, I was fond of a radio station that pulled songs from the 90’s.  My enthusiasm has since waned after hearing Ace of Base and Kenny Loggins play more times that I care to remember.  At the beginning of my drive, I tuned in to the sweet sounds of Dave Grohl and Bon Iver which quickly decomposed into static. And then I felt alone.

In a previous post, I mentioned that the rural landscape unsettles me.  During my long drive, I coped fairly well, until I exited 94 West to smaller highways that ran through monotonous farm land for what seemed like hours.  I was caught in a strange juxtaposition between pleasure and fear; enjoying the beauty of golden fields and leaning barns, and driving, white-knuckled and sweaty-palmed, through an unfamiliar territory of flat land interspersed with water.  Not your traditional lake water with sandy beaches, but fields filled with large holes of water.  Not surrounded by beach or rocks, but lined with road or pasture and punctured with dead, Halloween trees.

Sometimes, the craters of water seemed to wave like the ocean and kiss the ground, merely feet from both sides of the highway.

I stared at giant jelly rolls of hay that undulated into the horizon. 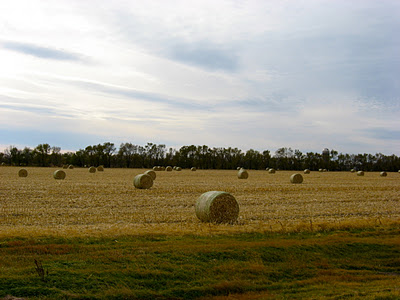 As I neared the town of Fredonia, I turned onto a series of gravel roads. 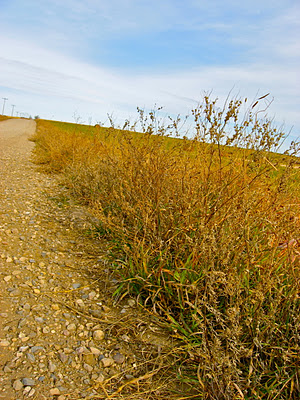 Finally, I arrived at the not-so-ghostly town of Fredonia.  Unlike the pictures I had previously seen, I noticed many people.  An industrial farming or grain structure was buzzing with employees.  The actual main street was surrounded by a few, weathered houses, some of which I assume to be inhabited due to their satellite dishes.

The main street was lined with a few buildings including Home Plate Cafe, what looked like a bar with a Pepsi banner, and a small, well kept bank with pumpkins peeking from its windows.

The church seemed to be cared for. 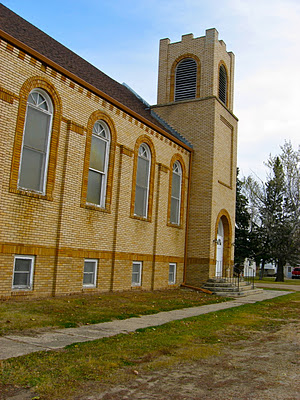 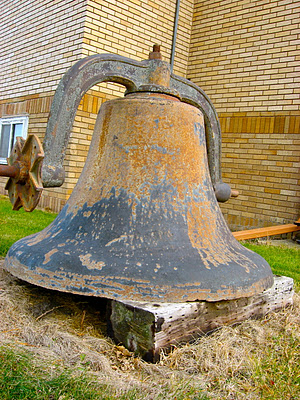 I walked into Home Plate Cafe. 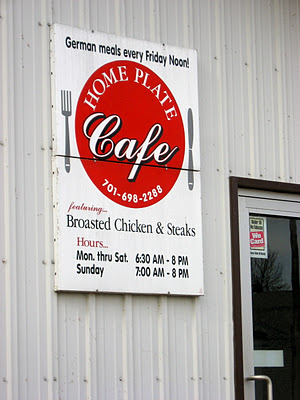 A group of men who appeared to be on their lunch break dined at one large table and a few other locals ate at others.  Home Plate Cafe seems to be a popular spot for locals and I was obviously not a regular.  The young woman working at the cafe seemed confused when I asked for a menu and I later understood why.  Everyone else already knew what to order.

I felt so out of place that, when asked if I wanted to dine in or take out, I almost chose take-out.  However, I decided to stay, grabbed a table near the corner, and purchased the Jamestown newspaper for 75 cents.

Finally, I noticed the blackboard listing the daily lunch special and pie selection, and ordered half the meatball special that came with a bowl of knoephla soup.  The regular menu offered typical diner fare such as hamburgers, chicken, and fried shrimp.  According to an online search, this type of soup is popular in North Dakota, originating from German emigrants from Russia. 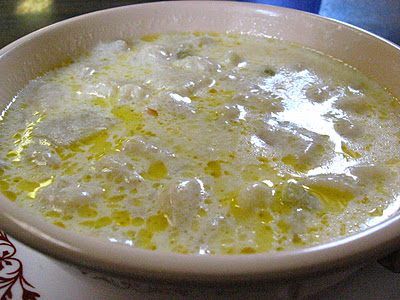 This soup was really divine, as you can see by the glossy butter sheen.  Unevenly cut dumplings, small pieces of potato, onion, and celery lay amongst a velvety soup.  The dumplings were light and reminded me of gnocchi while the soup was deeply satisfying without feeling too rich.

Next, arrived a giant 1/2 portion of the daily lunch special. 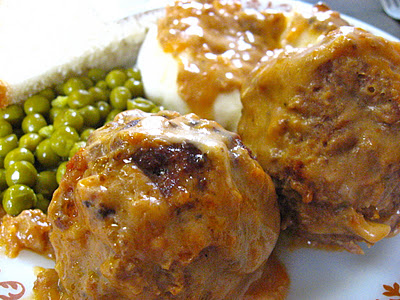 The plate contained two large, dense meatballs, what tasted like mushy canned peas, mashed potatoes, a slice of white bread, and small pat of butter.  I actually enjoy any kind of peas, even canned peas, so I was happy to finish my vegetable. I especially enjoyed the delicious gravy that covered the meat and potatoes.  It was so savory and also tasted homemade.

I stood up to leave and ordered a slice of their rhubarb pie to-go and paid my tally which amounted to about $8.50.  The two women employees seemed to warm up when I asked about their German menu.  They confirmed it is still offered Fridays and described their upcoming special of roasted pork loin and dumplings.  Despite my initial discomfort, I am glad I stayed.  The men went about their business discussing their concerns about water levels and work, mutually bantering back and forth with the waitress in a friendly and jovial manner.

And the pie.  My goodness the pie. 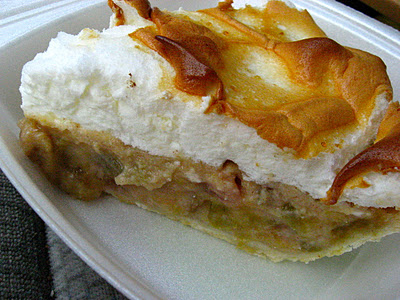 The meringue was caramelized on top and fluffy like a marshmallow.  The rhubarb filling had the texture of a custard and maintained a perfect balance between sweet and tart.  The pie crust was delicately light and flaky, even beneath the filling.  I can not think of a more beautiful piece of pie and I should have ordered more than one slice.
On my way home, I admired more hay rolls. 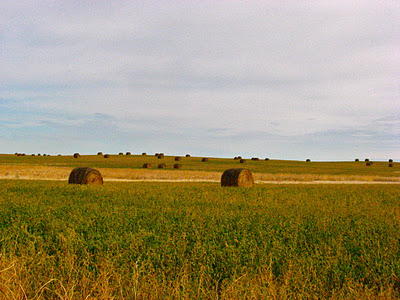 And paused at some dusty railroad tracks. 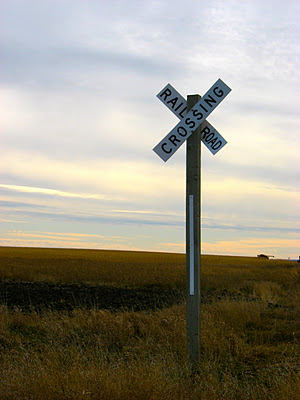 The 2000 census recorded 51 occupants in Fredonia, while the Ghosts of North Dakota site estimate a couple dozen in May of 2011.  From my observations today, Fredonia seemed far from a ghost town and actually buzzed with noticeable activity, vehicles, and the addition of small houses and trailers.
The journey felt long, but was worthwhile and I yearn for one more slice of rhubarb pie.