Last weekend, on our first cold, snowy night, I attended my first lutefisk dinner. Lutefisk is a Nordic food tradition of preserving cod fish with lye. You know, that stuff used in soap making or added to oven cleaners and drain openers? Yup. That’s the stuff. “This is totally not a metaphor,” I kept saying.

If you google “Lye” you will also find that it brings up articles related to “tissue digestion.” A friend reminded me that lye’s also used to make bagels so I felt a little better. After the fish is treated with lye, the flesh takes on that striking jello-like consistency. After a six-day soak in water, it’s fit for human consumption.

END_OF_DOCUMENT_TOKEN_TO_BE_REPLACED

Norwegian For A Night: A Norsk Christmas Dinner At The Kringen Lodge

As I’ve mentioned in previous posts, I was adopted from South Korea by a Scandinavian family when I was about six months old. While my parents didn’t observe many Scandinavian traditions, my grandparents did. My grandma decorated her kitchen with those little blue plates and made pepparkakor cookies. When we visited their home in Cuyahoga Falls, OH, I looked forward to sitting on her couch and flipping through her big book about Norwegian trolls.

We celebrated most of our childhood holidays with my mom’s cousins family. They make lefse every Christmas and I’m excited to have recently learned how to make it for myself (you can read about my first lefse-making adventure here). One of my cousins married into another Scandinavian family. We celebrated a holiday at their house where I tried pickled herring and actually liked it. Now, I’m married to a man of Scandinavian descent whose family is named after a small town in Norway.

This weekend, Jake and I attended the Traditional Norsk Christmas event at the Sons of Norway lodge near downtown Fargo. I had seen the event advertised in the local papers and didn’t want to miss this opportunity to share authentic Norwegian foods. We arrived an hour into the event and settled into the back of the long line which snaked around the lodge. Fortunately, it moved relatively quickly. We were entertained by admiring the silent auction items and taking in the atmosphere. Dark wood paneling and regal, Scandinavian wallpaper. There were lots of Vikings and trolls who appeared in paintings and sculptures everywhere. We also admired the other attendees’ outfits. Many wore their best Scandinavian sweaters while others wore suits.

We tried a little bit of everything from the buffet spread. Fresh fruits and vegetables. Lefse and flat breads. Meatballs in a creamy gravy and spicy barbecue sauce. Thick slices of silky and buttery cured salmon and briny, pickled herring. A man carefully carved a large block of Gjetost cheese.

There were also numerous baked goods and desserts. Slices of bread with candied fruits and the obligatory lefse with butter and brown sugar. Cones of krumkake that tasted like homemade waffle cones. Delicate rosettes that literally melted in our mouths. Soft, heart-shaped waffles. And chewy rings of kransekake that tasted like almond. 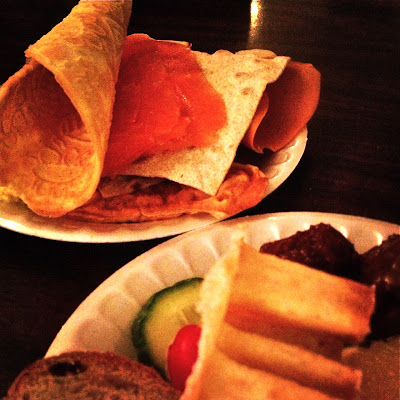 And then there was the rommegrot. 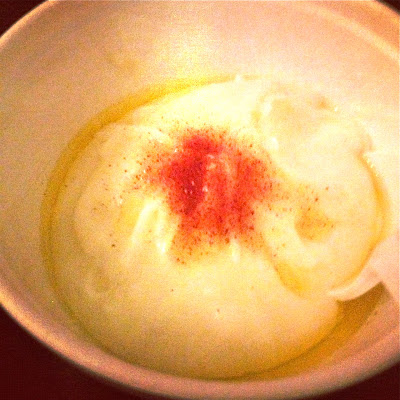 A large pot of this porridge perched at the very end of the buffet line. In fact, it had it’s own table. The man serving the rommegrot told us it was made mostly from cream and flour. We curiously watched the more experienced attendees fill their dishes with mostly melted butter, a smaller amount of rommegrot, and spoonfuls of cinnamon-sugar. I wasn’t sure if I liked my first bite so I returned to the rommegrot station to do it right. This meant adding more butter and more sugar.
We enjoyed dinner with another young couple who was also visiting the lodge for the first time. The woman had spent a summer studying in Norway and shared a little about some of the food and traditions we were seeing. Glogg, a fragrant Norwegian-mulled wine, flowed freely. It was so rich with clove that my tongue felt a tinge of numbness.
Then we watched them dance. The older Norwegians, many of whom seemed to wear stoic expressions on their faces when sitting, lit up while dancing. Round and round they waltzed, with an air of grace and serenity that put us all to shame. I have no doubt they continued to dance late into the night, long after the youngest of us went home to sleep well before the closing time of 12:30 a.m.
We peeked inside the bar on our way out the door. The bar was majestic and made of more dark wood. The room sparkled with lights, and we studied murals featuring more Norwegian trolls. We quickly decided this was the coolest place to enjoy a drink in Fargo.
This Norsk Christmas was certainly joyful. We left, full from new tastes and warmed from the hospitality that was bestowed upon us both. The Norwegian and the Norwegian at heart.


I was really judgemental of parents until I had a

Merry Christmas to those who celebrate. Christmas

Is @portilloshotdogs strawberry shortcake the best